The 'Shroom:Issue 64/The Fresh Paper Mario

Talk? C???, writing right now live for this 64th issue! This is my first time writing for The 'Shroom in my time here, kinda weird but I’ll go with it, but anyway, c’mon, you know I gotta do a N64 game, it only fits in with this right here issue, so I’m gonna be doing one of the good ol' classics, that new fresh flow style, Paper Mario (rated E for Excellence!) 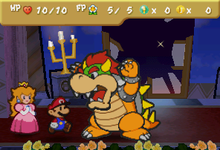 Released waayy back in the day, 2001 for “us” (get it?), this game was the pinnacle of greatness. That’s probably why it also got released on Virtual Console in 2007, it was just too good. This was the first of the series, and one of the best ones too. There was also Super Mario RPG but that game was, y’know, not even made of paper, man, shit was straight out the door! I mean it was fun and all but Paper Mario took the throne by far. I should also mention this was developed by Intelligent Systems, the first real, like, game that Nintendo and them worked on together (the other one was Tetris Attack but who cares about that). Now you got some of that background knowledge let’s get on to the core stuff about why this game is that fresh! 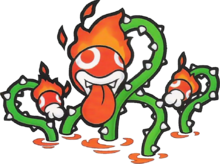 The story is epic. Why? You’ve probably never seen Mario get his ass handed by Bowser so that you could progress through the story! Bowser gets sick and tired of building like 100 castles and shit so instead builds one, right underneath Peach's Castle (man I couldn't believe it either) and steals the Star Rod from Star Haven to, well, take over the world once again with his girl Princess Peach. Peach invites the Mario Bros. to a party in her castle, but just as Mario heads up the stairs, you’re friendly neighbourhood Koopa crashes the party, hands you the white flag with his new arsenal of OP moves, kicks you out the castle and lifts his castle above the ground high into the sky, BOOM! Since you’re in paper form, sticks and stones still break your bones but a 50 foot fall won’t kill you at all (oh snap!) Just as when all hope is lost, Mario lands in a forest near Goomba Village and Eldstar appears in his dreams, telling him to head up Shooting Star Summit and rescue the 7 Star Spirits in order to stop Bowser’s plan. A whole new adventure begins, a massive tale at that. 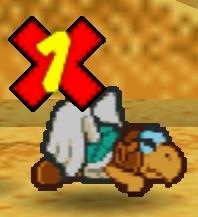 That feel when your partner is down :(

Gameplay, damn. Paper Mario has sick line up of everything. The graphics are really nice and cutesy, most N64 games have like, polygon type of sprites, but this sticks with 2D, however, the environment is 3D. Everything looks amazing, play this on any type of TV and you’ll have loads of fun, besides, who cares about graphics anyway when the gameplay is super fun? The action packed storyline of 8 epic chapters seamlessly fits in with the simple controls for the game. One of my favourite things in the game is the Spin Dash, you press Z and you can go faster, knock out enemies, etc. It’s one of the best moves ever in Mario history. More about controls, you can do many things with your Boots or Hammer, and even get upgrades for the that allow you to do crazy shit like the Tornado Jump (just hearing the name of it sounds like some amazing shit, eh?) The battle system in this is really neat too, just stomp or smash an enemy (or they might hit you!) to engage in one. Here, you could see your Health Points (self-explanatory), Flower Points, basically your "Magic/Mana Power" for you RPG fans out there, using these make you perform moves that are more powerful or tactical against foes, and Star Power, which you gain after each Star Spirit is rescued, and can do a wide variety of things, such as healing you or damaging all enemies. Also unlike more common RPGs, this one is much more simplistic, with few HP points and no confusing and unfresh shit like magic defence or anything like that, its just health, defence, and attack power. Winning battles earn you Star Points, collection 100 of them lets you raise your HP or FP, and of course (most importantly imo!) Badge Points, which allow you to equip the vast majority of Badges found throughout the game. Badges are so fun to collect and use, theres many powerful and tactical ones, and even ones that change sound effects and do other things like make enemies drop more items or increase your Spin Dash distance. Badges are the best thing ever, sometimes I wish it was possible to equip all the badges, I'd be invincible, sadly there's a cap to it once you reach a certain level.

Fuck boats, this is how the fresh people do it

You can also use items in battle and on the field, there's many and they do lots of things, such as revive you when you run out of HP, or deal massive damage to all enemies. There's so many ways to battle, it just depends on what type of player you are. Oh, and let's not forget partners, they are essential for you as they help you progress through the game. They also have special moves, one of my favourites is Parakarry’s Shell Shot. God damn, that thing is too good man, just aim & shoot, boom, that guy is out the door. There are, however, a downside to partners. They can’t use items for shit (like c'mon, Mario you greedy ass) & they can't use Star Power, nor do they have any HP. If they get hit, they are unable to move for a few turns, which sucks a lot. The last thing you should know about battles are Action Commands and Guarding, these are basic tools that help you deal more damage, and well, take less damage haha. Action Commands vary from tilting the Control Stick, tapping buttons (usually A), and a variety of other things, if executed correctly, deal much more damage than without it. Guarding isn't as great here as it was in Paper Mario: The Thousand Year Door, where a Superguard would deflect all damage and deal 1 to the foe, but it's still effective and blocks some damage.

Lastly, the Music/Sound in this game. Everything is perfect, Paper Mario definitely keeps it fresh. You'll probably find every single song in this game enjoyable and never get tired listening to any of the songs. One of my favourite themes is probably the Koopa Bros. battle theme, god damn, fast paced, has that good ol' nostalgic feel to it, and catchy. I dunno what it is but it's a really great song. Hell, I'd say every song is my favourite, seriously, there's not one I dislike. The sound effects fit in well too, man, it's like they already knew which ones to use. I can't really say anything else, it's just that good =O

Overall, Paper Mario is one of the best N64, nah, probably one of the best Mario RPG's out there. If you haven't played it yet I highly recommend you do, this game is like, almost a 10/10, with a few flaws here and there but like minuscule. The game started it all, the root of all future Paper Mario titles, this is one series that you definitely have to check out, starting out with this of course.

I hope you all enjoyed my review, seeya around!