From the Super Mario Wiki, the Mario encyclopedia
< The 'Shroom:Issue 166
Jump to navigationJump to search

Greetings, all! Welcome to the January issue of The 'Shroom!

I recently turned 26! I'm happy to have another year, especially since last year was such a tumultuous time. It seems like 2021 is also starting out with a violent bang. Hopefully, things will quiet down and we can focus on healing from 2020.

Recently, New Pokemon Snap got a release date, and I'm so excited to play it! It looks gorgeous, and I can't wait to take some pictures of Pokemon and travel through the region of Lental. I never got to play the original Snap, but I've heard only good things about it. My biggest hope for this game is that they give us a good variety of Pokemon to take pictures of, not 90% gen 1.

This month we return to our regularly scheduled art sections, so I'll let you check those out. Happy New Year!

You all liked our Shroobmas sections! Magolor04726 (talk) came in first place for his World of Plight entry that introduced a new villain! In second place, Lakituthequick (talk) took a deep dive into Nintendo's official website for Donkey Kong Country: Tropical Freeze. Third place goes to our guest, Hooded Pitohui (talk), who came back to write a Mario's Boombox section covering the tunes of Juno Songs. Yoshi876 (talk) is fourth, where he looked at the Japanese boxart for Mario & Luigi: Partners In Time in tune with our theme of the month for What's on the Box?. Finally, we have winstein (talk)'s Drawn and Pressed featuring Mutts. A big thank you to everyone who voted, and please keep it up in this issue, too! 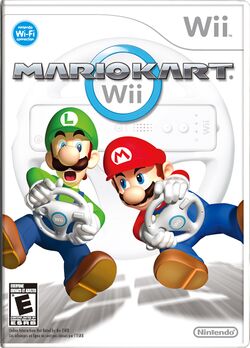 Last month, we slightly bemoaned the Japanese boxart for Mario & Luigi: Partners in Time due to it being pretty bare-bones, and this month, we're also visiting another boxart for being bare-bones, although on this occasion, there's even less to talk about, so fittingly it'll almost be like a pit stop.

This month, we're looking at the boxart for Mario Kart Wii, which is one of the first Wii games I have proper memories playing alongside Wii Sports and Super Smash Bros. Brawl. Now, while those boxarts were pretty good, this one just isn't. All it features is Mario and Luigi floating in the air, while both holding a Wii Wheel, while another bigger Wii Wheel is superimposed across the background. And unless Mario Kart Wii had some plot where an evil steering wheel was trying to take over the world and the only way to beat it was through Kart racing, it is a bit weird to have that in the background position.

I think what irritates me most about this boxart is that Mario Kart Wii really changed up the Mario Kart formula by introducing bikes for the first time, and such an important feature is completely left off the boxart. And on top of that, we don't even get to experience any of the cool Karts that the game had to offer as they too were replaced with Mario and Luigi floating in midair.

What this boxart really needed was more Karts, probably more characters alongside Mario and Luigi, throw in a heavyweight like Bowser or Rosalina and a lightweight like Toad or Toadette and get rid of that Wii Wheel in the background; Mario and Luigi are already holding them it doesn't need a second appearance. 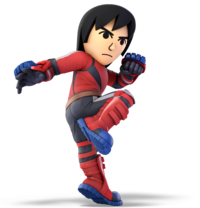 Sakurai really seems to be favoring Gunner with all the good costumes. She got a Cuphead costume, a Geno costume, and seriously?! SANS?! From what I understand, he was actually invited to Smash back in 2018. 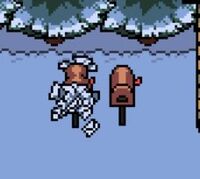 Hmm… you know, I think I know why he never responded. -Mags

But he never responded or showed up, so Gunner got a costume based on him. It’s totally unfair. Seriously, I got a Pig costume recently.

Couldn’t they have done something better, like an Iron Golem?

Well, it’s not like a new outfit would have done much to help. That attack was the straw that broke the camel’s back. Sakurai has evacuated everyone except for the Fighters and mandatory staff, the chefs, janitors, technicians and such. He’s so flustered, he actually followed the Magic Master’s advice. (That’s why we’re all still here.) All spirit reps are gone and no one is allowed to visit without his approval anymore. Frankly, the whole place is very barren now. And none of the Fighters seem to trust each other, so the only people to talk to are the Koopa’s who clean the hall outside my room and Chef Kawasaki. But I’m not too worried. I seriously doubt anyone would bother kidnapping me. Between me, Swordfighter and Gunner, I think Gunner is most likely to get kidnapped. Mostly because of her costumes. 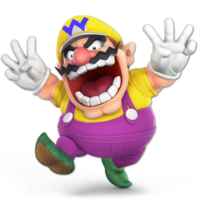 WAAAAH!!! peepul think Waluigi kidnapd thos loosrs?! i think mario is mor liklee to hav kidnapd them. or maybe tha mayor guy. he can fit lots of junk in his pokets, so mabe thayr in thare someware! butt not Waluigi!

(Wario actually said something of some value. An accusation! A very serious thing. But seriously, what is it with him and garlic?)

Hey guys! Thanks for reading this month’s issue of World of Plight! I hope you enjoyed it and are excited for next month’s issue! Something big is coming that may span several issues. (No hints, now!) All I can say is this: be prepared for a mysterious place, a shocking discovery, and a familiar face or two.

School has started again, so I may be inactive online for a while. (I’ll still be writing this, don’t worry!)

Oh yes, welcome Sephiroth! I hope you have a great time here in Smash!

Many of the internationally-available comic strips tend to be from the United States and occasionally Canada, but some of them may be from different countries. Previously we covered Ollie and Quentin, a British comic strip. This time however, we are covering a comic strip from somewhere closer from there, being Finland. This cartoon, Dark Side of the Horse (named Musta hevonen in its native language, which is basically "dark horse"), is written and drawn by Samuli Lintula. As the title suggests, its main character is a black horse. I guess it's not literally named due to there being a publishing comic company of that name, so an alternative name was used. It should be noted that the comic strip's artist pen-name is Samson because it rhymes with some of his favourite artists: Watterson, Larson and Jansson (creator of Moomins).

The first Dark Side of the Horse comic strip since Andrew Mcmeel's syndication.

The comic strip's central character is a black horse named Horace, which is not the most original name for a horse but for a simple cartoon it would do. He's also described as sarcastic and silly, and has been known to have an affinity for coffee. On occasion we see a couple of characters, where one of them is a female white horse named Melody, and the other is a bird called Sine. Another character mentioned in this cartoon's overview, if you would called it as such, is an unseen neighbour but I haven't really seen their presence so I can't confirm this. It should be pointed out that despite the character having hoofs for hands there's no trouble doing human-like things with them. After all, it's just a cartoon so we should roll with it.

Visual humour can even be mixed with wordplay.

Contrary to the main character being a horse, the comic strip's humour isn't really about horse humour, unlike how cat comic strips and dog comic strips are about the antics of that specified animals. Indeed, Horace is shown living in a regular house rather than a stable, and partaking in human activities, akin to a human in a horse suit. The comic strip also has a number of running gags where each of them have a twist to make it a fun read, and the notable ones include elevators and sheep that appear during sleep time, and rarely there's a segmented panel that showcases events based on time passed (such as the seven days of the week). The comic strip also has quite a fair share of visual humour, which I really like because they tend to not involve words, and it's also showcases a better sense of creativity on the artist's part. 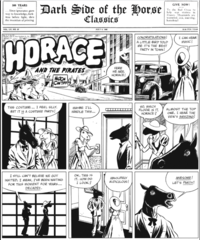 My favourite of the mock strips, which is a clear reference to Terry and the Pirates.

The author got his inspiration for his cartooning career from a very young age, where his main source of entertainment was from comic books, given how limited the television programming was in Finland back in the 70's. His first exposure to the world of comics include the Donald Duck comics, B.C., Peanuts and Asterix. It was through this exposure that he decided that he wanted to be a cartoonist, where he sold his first cartoon involving bugs (which I find amusing because Jim Davis also involved bugs in one of his cartoons), and later on he sold some of his cartoons to his local Finnish cartoon magazines, which is basically confirmation for him to pursue his cartooning career. To achieve his dreams, he dropped out of university where he gain the experience by contributing to Myrkky, a now-defunct magazine in the style of MAD with an underground comics edge. During this time, he wanted to create a comic strip to call his own, and suffice to say, when he eventually made it about the black horse, his work was accepted for syndication.

This comic strip originally started back in 2008 where it was under the Royal Comics Syndicate (a Finnish comic syndicate) but it also appears on GoComics at a later date, at around 2010. Much later in 2020 it was syndicated under the Andrew McMeel Syndication, known for being in charge of well-known cartoons such as Garfield, Ziggy and The Far Side. Because of this change, this comic strip adhered to a more standard format. Before this, the cartoon occasionally takes advantage of the freeform canvas of the web to have different layouts. That's not to mention the release schedule of this cartoon, where it used to be less regular. After this promotion, so to speak, there's one cartoon every day even if currently the material may be reruns from the past. To commemorate the transition, the artist even drew up mock strips of the cartoon depicted in "classic art" for a week, including a cave painting and a few strips depicting the character in art from decades past. It really shows the passion this artist has for the comic strip, owing to his childhood dreams.

As a relatively new syndicated comic strip that shows promising ideas, I felt that it's a good time to cover it to showcase how well-put it is executed. Overall this is quite a pleasant comic that isn't concerned with continuity or being too wordy, so it's a simple and entertaining read.

Dark Side of the Horse's syndicated run can be read starting from: https://www.gocomics.com/darksideofthehorse/2020/07/05

Thank you for reading.

NOTE: There's no references this time because I only used one reference for this article: Samson (Dark Side of the Horse) - GoComics