From the Super Mario Wiki, the Mario encyclopedia
< The 'Shroom:Issue 149
Jump to navigationJump to search

Hi, everybody! Can you believe it's already the middle of August? I can't.

First things first, I want to thank everyone who voted for Carmen for best written section of the year in the Community Awards. Just getting the recognition in SotM is enough, but to be the gum on the shoe in the stew? That means a lot to me, and I want to thank you for your support!

That aside, how is everyone enjoying Fire Emblem? I know a certain friend already has ALL THE FEELS and he hasn't even completed his first route yet. Next time this month I'll be screaming at you about Astral Chain, so you can mark that on your calendar. Expect some concrete thoughts since I will have had plenty of time to play it by then.

That's about it for me this month, so I'll let you get to our sections this month! As usual, they are excellent. What Palette Swap lacks in quantity, we make up for in quality, I promise. ~FunkyK38

Yoshi876 (talk) takes top billing once again for his What's on the Box? section covering the boxart of Dr. Mario! A big thank you to everyone who voted, and please keep it up for the future! 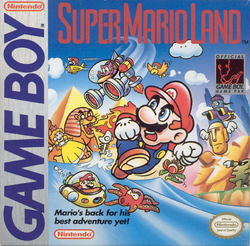 I've finally done it, I've gotten us back to a mainline Mario game boxart. It's only taken us about six months of looking at spin-offs, but I have returned to look at a mainline Mario game, and the first Mario game to have been released on the Game Boy. I didn't really get into the Mario series until around the GBA's dying days, and majorly got into it during the DS era, so I have no experience with this game.

From the boxart, it is clear we're in another world. We can see many of the different areas in the game like the Birabuto Kingdom, Muda Kingdom, Easton Kingdom and the Chai Kingdom, and we can see enemies from these kingdoms as well. Featured enemies include a Gao, or the boss King Totomesu, a Honen, a Gunion, a Batadon, Hiyoihoi, a Pionpi, a Pompon Flower and a Chicken. And to top that all off, there's the game's final boss Tatanga and Biokinton.

And that's not all the boxart features. Not only do we get one Mario, we actually get three Marios. There's normal Mario, and there's also Mario in the Marine Pop and the Sky Pop. And yes, the boxart also features Princess Daisy who Mario must save.

One could probably accuse this boxart of being a bit too busy, and there certainly is a lot going on. However, given the general sparsity of Mario boxarts as of late, I do not mind this busy boxart. It also shows off what a varied game this is. Not only will you be travelling through deserts and fighting zombies, but you'll also be able to take to the seas in a submarine and fly through the air in an aeroplane.

A few things could be lost from the boxart without impacting its quality. For instance, both the Pompon Flower and the Chicken could be dropped, and there'd be no real discernible difference to the overall box.

Super Mario Land is a busy boxart, there's no denying that. But it works well, it shows a lot of what the game is about, with its wide variety of locations and enemies. Maybe it should've held a little back to surprise gamers, but I would love other Mario boxarts to show off more, even if it's just the world we'll be exploring while we rescue our princess.

If you've been reading this section for a few months, you may recall a feature on the song "Waltz of the Forest," an animated music video for a fan-made lyrical adaptation of the theme of the Forest Maze from Super Mario RPG. You might also remember that "Waltz of the Forest" descended from a popular meme-song called "Geno's Forest," which, under the name of "Rawest Forest," attracted numerous remixes, fan-edits, and parodies.

Now, why would I take the time to remind you of all of that when I've covered it before? Well, as it turns out, it's not only the English-speaking Super Mario fandom who took a shot at turning an animated music video with a lyrical adaptation of a famous videogame theme into a meme. Yes, just a few months after "Rawest Forest" peaked in its popularity back in late 2007, the Japanese fandom created a new meme-song in the form of "Super Mario Hyadain," or, as Know Your Meme calls it, "The Western Show on Super Mario World." 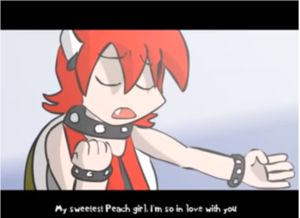 Falco's take on the video features Mario, Bowser, Luigi, and Peach drawn in an anime style.

What is "Super Mario Hyadain," exactly? At its core, it's a lyrical adaptation of Super Mario World's "Overworld Theme" set over a short animated video. Most of the lyrics are in Japanese, though, as is often the case with Japanese music, some of the words are clearly in English. If you don't know Japanese, though, there are plenty of versions with English subtitles out there. The song itself is the story of Mario and Bowser competing with one another for Peach's affections, with Bowser vowing to steal her away and Mario vowing to risk his life in stealing her back as they both try to win the Princess' heart. Peach herself, however, has other ideas, having no interest in either of the two competing males and pleading with them to get them to realize as much. And that's the thrust of the story! Some versions add additional elements, including spoken dialogue between Mario and Bowser to emphasize their friendliness with one another when they aren't "on the job." Other versions add a verse for the oft-forgotten Luigi, a verse in which the green brother tries to insert himself into the song and avoid being left out only to be threatened by Bowser, pushed out by Mario, and rejected by Peach. Given the nature of the song as a source of fan remixes and memetic parodies, it shouldn't be too surprising to hear that some versions add other elements and characters, but the spoken dialogue and the verse with Luigi tend to be the most common additions.

Given the song's nature, it's hard to select any one version of the song as the "definitive" edition. There are numerous videos out there, each with their own take on the song and accompanying video. You can see a selection of them for yourself with a quick YouTube search for "Super Mario Hyadain." That said, the one which comes up first on Google is the version with animation by Scott Falco, so it shall be our version for reference. Falco's version of the meme is similar to "Waltz of the Forest" in that it came a bit later, has smoother animation than the original series of videos, and is generally the version most people stumble upon. Falco's version includes the aforementioned spoken dialogue sections and the Luigi verse, and it also includes a short sequence of flashbacks to instances of Peach rejecting Bowser and Mario over the years that's set to the Special World theme. Falco's animation opts for bishonen versions of the three males, with a humanized Bowser, and generally has an anime-inspired look to it. It has some neat references, too, including cameos by Count Bleck at the forced wedding of Peach and Bowser and an appearance of the infamous "Weegie" sprite during Luigi's verse in the song. 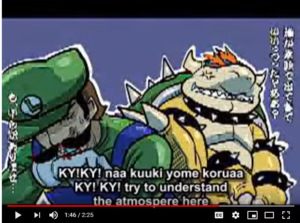 Poor Luigi can never catch a break, even in memes.

That said, it's far from being the original video. The original video is, as best I can tell with some cursory searching, lost to time now, though it wouldn't surprise me if someone has a mirror of it uploaded somewhere. The original was created by a video creator known as Hyadain (hence the name "Super Mario Hyadain") on the website Nico Nico Douga back in 2008, and quickly garnered numerous remixes and parodies. And, while it's better for me to leave you to go search out the numerous versions for yourself, I'll share this version which opts for the complete opposite of Falco's bishonen, animesque style and gives us disturbing, middle-aged versions of Mario and Bowser. This version does give us quite the stunning bishonen Luigi, though, which makes the poor plumber's rejection even sadder.

Beyond that little history lesson and the brief description of "Super Mario Hyadain's" basic premise, I don't have much more I need to say here. This is one of those instances where it's better for me to introduce the song, and send you off to search up the videos for yourself so you can find your favorites. If you aren't a fan of Mario, there's been plenty of versions made for other media, as well. Look into that "Know Your Meme" link if you want to track those down. It may be a few years past its peak popularity, now, but there's still plenty of remixed versions out there. Perhaps it's time for it to make a return, even? I'm surprised, almost, that it failed to make a resurgence with the release of Super Mario Odyssey. It seems an enterprising fan could do well putting the song over the game's ending cutscenes, given the story it tells. With that said, take a look at the linked videos, search up your favorite versions, and enjoy this look back on this decade-old Super Mario meme song!