From the Super Mario Wiki, the Mario encyclopedia
< The 'Shroom:Issue 148
Jump to navigationJump to search

Hi, everybody! It's July!

Which means it is HOT where I live. Winter this year dipped down below zero so this is like 100 degrees in the other direction. Can't say it's too fun.

How are you all liking Mario Maker 2? Honestly, I need to save up my money, September is gonna hit HARD. So many good games!

I don't have a whole lot to say this month, so I'll let you get to our sections. Enjoy! ~FunkyK38

A close one this time between our two sections! But a narrow victory for Yoshi876 (talk) for his box art analysis of Yoshi Touch & Go. Thank you to everyone who voted, and please keep it up!

Yoshi's got a FEVER
[read more]
The legend of the great remixes shines through!
[read more] 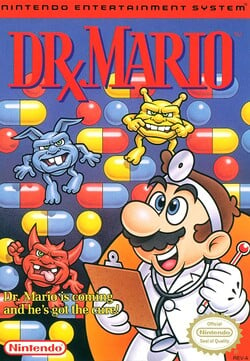 Wow, I really need to get back to some mainline Mario at some point, I always seem to forget that I haven't, and only realise when I get to writing this, and my opening line pretty much remains the same of reminding me to feature one at some point… Anyhow, I've been suffering from a mystery illness recently, either a cold or hay fever, so what better boxart to analyse than the original Dr. Mario for the NES.

A lot of the time in this section I have complained about various boxarts, and while there isn't a lot to talk about on this one, it really does tell the whole story. Mario is seen as Dr. Mario, all three varieties of the Viruses are seen, and fittingly enough one of them is a fever. The background of the boxart also shows the Megavitamins linking up with the viruses, although not destroying them in this case. Plus, it also features a little tagline, something I now wish many more boxarts actually carried.

Normally if the above paragraph was all I could talk about in regards to a boxart, I would be a little bit annoyed, but in this case the boxart actually shows off everything it is meant to. It features the main character, as well as the main objective. You may not necessarily understand that this is a Tetris-esque game just by looking at the boxart, but at the end of the day it can't spell everything out for you.

I would love to list improvements, as that is one of my favourite parts of this section, but the only improvement I can come up with is that more boxarts should feature taglines like the one that this one features. Actually, tell a lie, I don't like how the R in Dr. is, it intersects with something to make this weird x, and it doesn't fit. So change the font and that's it, but if all I can find to complain about is a small font issue, then this really is a pretty solid boxart. 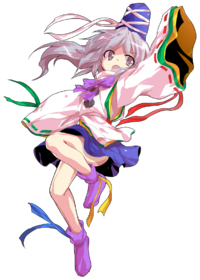 All you gotta do is be cool

Hello, 'Shroom readers! Welcome to another of those Touhou sections I hope you enjoy, but if you don't, that's fine too. This month will be a bit shorter than usual, just because I've got fewer remixes that I could find. But I've still got a few! We're doing Mononobe no Futo's theme, Legend of the Great Gods. Let's hit the beats!

We're starting vocals with a group that doesn't tend to show up often in my writeups, but is still pretty nice. That'd be Sally, who did Reikon Mythology. It's probably one of the chillest remixes of this theme I've ever personally heard, giving a surprisingly low-key, melodic take relative to what I usually hear. By contrast, 大神神話之道 by ALiCE'S EMOTiON (why do they need to stylize like that) is full of energy and excitement, though the chorus is interesting to me - it actually barely sounds like Legend of the Great Gods anymore in my opinion. Always odd when a remix goes that hard! Somewhere between these two falls Promised Land by Linjin, a full-on techno vocal theme that incorporates quite a lot of classic electronic styling into the song. It's probably one of the catchiest remixes I've got lined up, so I'd recommend it. There's also 朧道 by Seventh-Heaven Maxion. This particular vocal remix... honestly, it's nothing special or significant, but it's good, you know? It's a pretty ordinary remix of high quality. It's still worth covering on this!

Moving on to some that I really like personally, there's 宿命のプロミネンス by Crest. This particular song primarily stands out to me for the singer. The song's backing track doesn't feel like anything special, but this particular singer is solid and carries the song with some top quality vocals. Give 'em a listen! The konekodakkaiya remix sounds pretty similar in some key ways - very clearly two different songs, but there's some instrumental and vocal similarities to the previous song. Far from the same, but close enough that you can notice and compare, y'know? By contrast, Tsukiyo no Shinjitsu by Rokugan Alice feels far different. The whole song has an interesting air of melancholy around it, feeling designed to get you in a thinking mood... or maybe that's just me, who knows. Still, it's a good song for just listening to while spacing out, and who doesn't want one of those? In the same way, 盲想 by EastNewSound has some unique aspects to it, taking on a much more out-there type of vocal singing compared to the rest. It's one of my personal favorites, actually!

Of course, there's some instrumentals too. The Sound Sepher remix is another techno beat, taking the original Legend of the Great Gods and giving it some more impact just by changing the instruments a bit. It sounds almost aggressive now - you wouldn't want to meet this remix in a dark alley, I don't think. House Set of Ten Desires, on the other hand... well, I think I've linked the House Set series a couple times in the past, and honestly, if you've listened to one of them, you know what to expect. Not that that's a bad thing! A consistent artist style can be just what you need sometimes, knowing what you'll hear and enjoying it. 異教徒退治 by O-Life Japan, meanwhile, is bombastic and dramatic. Surprisingly, Legend of the Great Gods fits that style better than most, so I have to highly recommend it!

For the final batch of songs, the obligatory dBu remix runs to the same style as the O-Life Japan. Dramatic, yet with some traditional instruments to give it a unique feeling. Considering most of dBu's stuff tends towards rock, as you've heard in the past, I'm honestly surprised. 大神神話伝 by UI-70 has them both topped, a overwhelming banger of a track that goes all-in on metal. It's honestly a little too dramatic for its own good - I feel it loses something compared to the others. Maybe you'll think differently, though! Finally, [1] is unique in that it's the first time I'm including a fangame remix in a writeup. This dubstep is just too good to pass up, though. I completely recommend this track - give it a listen!

That about covers everything for this round of remixes. See you in September for a new set!