The rival[1] system is a recurring game mechanic in the Mario Kart series where one or more computer-controlled opponents are given a massive advantage to ensure the point standings in the tournament grid are always close. Some implementations of the system may also dictate the rank order of the entire grid and not just the CPU closest to the player. It is usually enforced through rubber band AI, a racing game convention where opponents get a speed boost (often beyond what the in-game statistics for the character would allow) when they fall too far behind the player. Rival characters may be given other advantages such as recovering faster from hits and getting better item probability. 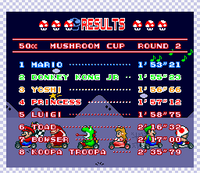 The rivals are expected to finish in a particular order. In this case, though, Princess got a lower spot than normal.

In Super Mario Kart, rivals contain one very fast driver, one fast driver, one medium driver, one slow driver and three very slow drivers. It is notable that when one of the three slowest drivers gets hit, that kart will keep its place, while when one of the faster cars gets shot, it will usually resume its previous place very quickly unless unable to catch up fast enough before the race ends. For this reason, the drivers (except the human racer) will (if unaffected) always finish in the exact same order. If the human-controlled player tries to hit an opponent, said opponent jumps over the item a majority of the time. The rivals are also not determined in pairs, so that even if Donkey Kong Jr. is Mario's rival, Mario will not be Donkey Kong Jr.'s rival, as shown in the table below.

The rivals for each driver are always the same, the list below will be in that exact order for the first race. It is possible to change the order if the rivals can't recover their place at the end (for example, if someone is playing as Luigi and Yoshi finishes last, Yoshi will then become one of the three slower drivers while everybody takes the next position up). It happens mostly on 100cc and 150cc.

The rivals are determined by the current points standing, meaning that if Yoshi was still only second to the player, he will boost back to first position from the start.

Mario Kart 64 and most of the subsequent installments (beside Mario Kart: Super Circuit) until Mario Kart 7 employ a simpler variation where one or two random opponents are selected at the start of a tournament to be of much greater skill than the other racers. Rival racers have strong rubber-band AI.

Mario Kart: Super Circuit features a preset order of CPU opponents from slowest to fastest for each character in Grand Prix mode. In Quick Run mode, the orders are reversed, except in the first track of each cup. When playing Grand Prix in multiplayer, the rival order depends on the first player's character.

Mario Kart 8 uses a Rival system similar to its predecessor, with several alterations. A set rival system is present only in the Grand Prix mode of the game; all other modes, including single player VS and battle are not affected and have randomized CPU opponents. Furthermore, only the original characters from the E3 build of the game receive a set system of rivals (Mario, Luigi, Peach, Daisy, Yoshi, Wario, Donkey Kong, Bowser, Koopa Troopa, Waluigi, Toad, and Toadette). The rest of the playable characters do not have a rival system of any sort, and all of their opponents in any modes are randomized. If there is more than one player participating in a Grand Prix, the first player's character determines whether there is a rival system or not, and what specific rivals the game gives the character. If other players choose the rival characters, the rivals are replaced by another, random character.

Mario Kart 8 Deluxe uses the same system, although more characters have been given rivals.