Why the dairy did you have to be offensive?! "Magical reading skills", BLEH. What is the longest word in the English language? Are tomatoes fruits or vegetables? How do magnets work? No Web Searching allowed. Niiue - Who has lost his tail?

YOU HAVE SO MANY TYPOS ON MY TALK RIGHT NOW. I WOULDN'T BE TALKING ABOUT PROPER ENGLISH IF I WERE YOU. Niiue - Who has lost his tail?

Look, funnyman, I think this is getting annoying. BTW, you did NOT answer any of my questions. Niiue - Who has lost his tail?

At least I can type a Warning properly. Niiue - Who has lost his tail?

Nope, this one. Niiue - Who has lost his tail?

But October 25th has passed. Niiue - Who has lost his tail?

PROVE IT. Niiue - Who has lost his tail?

Reply to the Archive "Edit" Case[edit]

Can you point me to the case where someone tried to edit a talk page archive, by any chance? If so, I can investigate it further and check the Warning Policy page to see if it warrants said action. Thanks! --M. C. - "Mario Gals" Fan! User Page | Talk Page 20:59, 28 October 2011 (EDT)

Huh? Who's side you're on? I just got "ordered" to search for something, I'm just kinda sick of it. Just by looking at a Donpyon, I can tell they can be Whomps. And I'm not the one who added that info in the first place though.--Prince Ludwig 19:59, 6 November 2011 (EST)

To be precise, I said that it is his turn to search, I didn't told him to search for a source. Users know that most users always tell me to search something, including for Mario & Luigi. I'm kinda tired of this. I'll just do it when I feel like it and when I really need it when it's urgent. And Raven Effect, are you Goomba's Shoe?--Prince Ludwig 20:06, 6 November 2011 (EST)

No. It is exactly what I really didn't do.

To tell you the truth, if I'd do something like that is when someone changes my info, I keep the info what was written and I'd ask a source then change my infos if it's telling something different unless if it's the same I've written, I would keep what was written, but someone can ask me to have a source. I'd would like to search for one (but for now, I don't feel like it. I'd tell the same person who keeps on sending me to find one that it is his turn to search by himself, except an admin that's for sure).

I didn't tell a user to find a source when I knew that I didn't have a source yet...but I tell him that it is his turn to search for himself, the person who always tell me to search for something that is, except an admin. To be honest, I'm searching for a source for Donpyon being a Whomp regardless of my actions. Whoo...--Prince Ludwig 20:23, 6 November 2011 (EST)

OK. I removed the thing that said they were Thwomps, because there is no source. Mario & Luigi (talk)

THERE ARE NO SOURCES! I'M TYPING IN CAPS LOCK FOR NO REASON. MARIO & LUIGI

Prima. That's a source for ya! Mario & Luigi

I would consider that.

That's right! Thank you for reminding me! I'll get working right away!

I put this message on Prince Ludwig's talk page but it goes for you too. I've told you already about edit warring and how it is not a way to solve things. Arguing with the edit summaries is not effective. I agree that the section is rather unnecessary but that does not merit your actions. Please discuss it with Ludwig.

There's nothing to help with!

Don't ever do that while the proposal is not over. And they are the same characters. You are just trying to do that to annoy me, don't you?--Prince Ludwig 16:34, 8 December 2011 (EST)

the proposal was because you thought he's just a minor character. And one more thing; the article is about the red-shelled character, same or not sorry, they still look alike and they are allies if you think they are not the same. Like Donkey Kong, Yoshi and Metal Mario are also known to be the same character who are like them (Donkey Kong being the same character from [[Donkey Kong (game), Yoshi being the same Yoshi who toke care of the Star Children and/or some Green Yoshis in the Mario series and Metal Mario who's sometime known as Mario himself when he's not). Since they can, Red-shelled Lakitu can too. But to most of the users and I, except you and Tecknical, Red-shelled Lakitu first appeared in Mario & Luigi then reappear in Mario Kart 7.--Prince Ludwig 16:45, 8 December 2011 (EST)

No, I'm not. And I don't wanna know. 'Cause I don't want to get the same depressed feelings of admins still want my user-behind ragebanned.--Prince Ludwig 17:09, 8 December 2011 (EST)

Sorry to have to disappoint you again, but I actually finally got my Wii sent back to get fixed just a few days ago, so heaven knows when I'll get it back...I really hope it's soon though, not playing videogames for months on end has been pure torture... :(

Hello Raven Effect, You may have remembered me for the chatroom but want to be friends? and is tomorrow good to race? Mario7727 (talk)

I was not aware of that, so I apologize for the edits I made. I'll revert my previous edits as well for the other SMB2 enemies (which are not Shy Guys or their subspecies). Thanks for the heads up! :)

Sure, which character of mine? Check my userpedia article. I'm a super-negative anti-hero/mad scientist. Unless you want me to be a hero.

Then I'd be Frostyfireyoshi. But he has fire AND ice powers, not one or the other. Because I don't like ice, personally.

I need you to ban User:SpongeBlobby. He's flammed several users, including me. How do I ban?

According to the warning policy, only admins can issue warnings for abusing warning privileges, if that's what you mean, but don't worry, it's been brought to our attention. Mario4Ever

Hey, I have a bit of a problem. I was uploading music files for Mario & Luigi: Partners in Time, but when I finished, only 20 showed up. Does a page only allow up to 20 media files?

Off my talk page[edit]

Well, considering that everything in the minigame category is a minigame, I'd say yes. Mario4Ever

Just a clarification; the admins' category overhaul is designed to have minigames in the most specific categories possible, instead of broad categories like minigames, so the most recent categories you've been adding are against that proposal. Bop1996 (Talk)

If you'll read the proposal, then you'll notice that the game-specific minigame categories are inside the broader category, so they don't need to both be on articles; that's the whole point of the system. Bop1996 (Talk)

I understand, but I did not personally attack the user himself. I quoted his words. Thank you very much for the advice, I shall read a few policies. Spidey665 21:02, 20 December 2011 (EST)

The list of links doesn't mention any Sonic sites. She's added external links to a lot of Sonic-related stuff, but I'm not sure if I should remove it New Super Yoshi's got a start on removing it anyway. Lord Grammaticus 16:10, 23 December 2011 (EST)

Sorry, I don't knew. Although, For me it's really unfair...

please stop posting what i do wrong on my talk!

Hello Raven Effect. I have replied to your message on my talk page. I hope my comments are helpful --Bryce

Yep, that's what they seem to be. Thanks for telling me. Fawfulfury65

RE: hacking a game[edit]

What part of the article's summary do you mean?

Yeah, it can be removed.

I ACCIDEntally disabled the chat, because i hit a wrong button.

Raven Effect, we have never met before, but I'm YoshiKong. I would like to say thankyou for helping me add the Wario Land 4 Enemies category to all those pages. Thanks so much! :)

On the subject of unnecessary edits[edit]

You may want to take a look at these snippets. I feel like this is something we should probably inform an admin about. Lord Grammaticus 20:21, 17 January 2012 (EST)

Oh dear, I completely forgot about that. I guess I got excited in seeing actual official artwork for Big Bob-omb :P

I'll change it if it hadn't already been changed back. Sorry about that.

Oh, right. I got mixed up there. The article's still not relevant to the Mario series, so it's not like the template helps much in this case, anyway. Mario4Ever

Even sockpuppet messages must stay? --Bryce

Oh hey! Sorry about the lack of editing yesterday (I was a bit busy with school work). I'll get on to completing it by tonight.

Sure no problem. I'll see if I can I do something with it tonight.

Hey, I saw Kelton2's user page and it is the exact same as mine from my TTYD fan club down. Is there a rule against copying half a userpage and using as your own?

Take Joe and his clones. 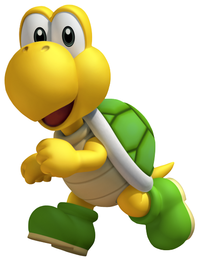 Hey there! I've opened a shop called the pickle shop. All items cost one coin. Leave a request on mai talk page with a coin and you will purchase that item. (The Yoshi Eggs aren't real, Yoshis will not hatch from them.) So, buy, buy, BUY!M&L+No Moar Picklez=Wurld War III [[Image:SMG YellowLuma.jpg|45px]] 21:39, 9 February 2012 (EST)