From the Super Mario Wiki, the Mario encyclopedia
< The 'Shroom:Issue XII
Jump to navigationJump to search

by My Bloody Valentine

Donkey Kong Wii is still without information. Some are even questioning this games existence, as no information has been revealed in about two years, now. It will, apparently, be an Adventure Donkey Kong game, similar to Donkey Kong 64. Donkey Kong is playable, of course, but nothing else has been confirmed.

No release dates yet, so the wait continues.

Dr. Mario’s Virus Buster in action, with a Mii being used as a playable character.

Dr. Mario's Virus Buster is a game coming out for the WiiWare system being released on the Wii. The player uses Dr. Mario, and has to drop Megavitamins onto the field, in a Tetris-style. Matching up the colors will destroy the Virus’, apparently. I don’t know much about the original Dr. Mario. Miis can also be selected instead of Dr. Mario, and Wi-Fi Connection is included in the game. Not much else is known, however.

Like Donkey Kong Wii, there is no release date for this game yet, like all WiiWare games. 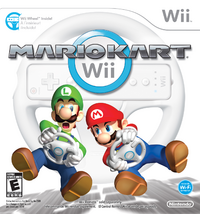 Mario Kart Wii's Boxart, with the Wii Wheel bundled in it.

Mario Kart Wii (tentative title) is the Wii installment of Mario Kart series, being released with the new Wii Wheel controller. This new controller will allow players to experience driving in a more realistic way, but not to the extent where you actually think you can drive a car. Mario Kart Wii also has Wi-Fi Connection to play people from across the world.

Wario and Bowser racing through one of the new circuits of the game, Wario Mines.

The basic gameplay is the exact same, it seems the only difference is the controls. Nonetheless, a few additions have been made. For instance, there are now at least 12 racers in each race, rather than 8. On top of that, players can now select multiple different karts for themselves, ranging from Hot Rod’s to Motorcycles. Race courses, both old and new, make their way into new generation graphics, with just as many gimmicks as previous Mario Kart titles. The courses, or circuits, are split up into different Tournament Cups, in a similar fashion to the last 5 Mario Kart games. Currently, we know of the Mushroom Cup and the Flower Cup for the new circuits, and the Shell Cup and the Banana Cup for the classic circuits. There will also be a Battle Mode, where rather than race, players fight to defeat each other by any means necessary. Items, an age old gimmick used in the Mario Kart series, return to the race. The effect of the items varies from item to item, for example, a Green Shell can be fired at a player from behind or ahead, but it only goes straight, while a Red Shell does the same, but homes into the player, except when firing backwards.

March 15th, 2008 is the first release date, and its for America. Japan and Europe will be the second Country’s to collect Mario Kart Wii, obtaining the game on April 10th, 2008. Australia will also get the game sometime in April of 2008, but an exact release date is not known.

A screenshot of Super Mario Stadium Baseball, which shows Mario batting while Bowser is pitching.

Super Mario Stadium Baseball is the Wii sequel to the popular Nintendo GameCube game, Mario Superstar Baseball. However, at this current moment, information is scarce on this game. Usage of the Wii’s interactive capabilities has not been confirmed yet, neither has the inclusion of Wi-Fi Connection.

So far, all the characters seen in the game were present in Mario Superstar Baseball, with no new Captains or Team Players confirmed, as of yet. Additionally, only three stadiums are known to be in the game – Mario Stadium, Yoshi Park and Wario Field. The fact that the stadiums are named after the Captains of the game is similar to the previous installment of the series. The return of Special Balls has been confirmed, and it appears the Sub-Captains now have Special Ball powers different than those of the Captains.

Information on the game is fairly low, possibly meaning the game isn’t very far into production. As such, we have no release dates at this current point.