From the Super Mario Wiki, the Mario encyclopedia
< The 'Shroom:Issue XCIX
Jump to navigationJump to search 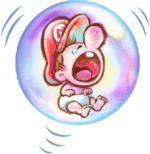 We won't be seeing hearing any of this. 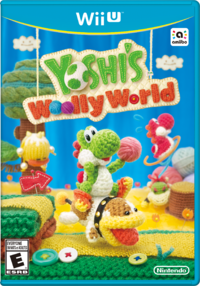 Well, since this article is set in June, I should probably talk about the games released in June, such as Yoshi's Woolly World. All I can say about this game is, cute! In this adorable masterpiece, you play as a Yoshi composed entirely out of cotton wool, or yarn. Another notable thing is that Baby Mario, who is better known for his screaming than he is for anything else, is (so far) completely missing, for the first time in a Yoshi game since Yoshi's Story. So all in all? It looks like a fun platformer in glorious but cute HD, with a fresh new idea about how the Yoshi games should work. Oh, and did I mention that the game has the best use of Amiibo since Super Smash Bros? Either your Yoshi gets a clone of himself, or he gets remade into a new design that looks just like your Amiibo!

Yoshi's Woolly World will be released in Australia on June 25th, in Europe on June 26th, Japan sometime in the summer, and in America later on in fall.

The next game I'm going to talk about is Mario Maker, set for release in September 2015. Marking the 30th Anniversary of Super Mario Bros, this game, as the title suggests, lets you create your very own Mario levels with at least four different graphical styles from the various sidescrollers the plumber has starred in. As the game features lots of customizability, you can attach enemies, power-ups and wings to each other. For instance, I've been dreaming about a Hammer Brother riding a gigantic flying Chain Chomp. Anyone else? What’s better is that some of the newer enemies had to be redesigned for the older games. And I think that the new Wiggler sprite for Super Mario Bros. 3 looks authentic and amazing. The game also contains a sharing section, where users get to upload their own levels to the internet for others to see. Oh yeah, and now Goombas pose a threat when they are underwater, because someone gave them the ability to swim. And by swim, I mean they glide towards you in a nice little animation that reminds me of Bloopers.

That's all for this month, folks, but hopefully next month Nintendo will announce something great, or I'll just have to talk about Splatoon or something. Bye!