Hello Mario Karters, welcome again to the Mario Kart: Wheel Tips Corner. Again, your friend, Coincollector, is here and ready to tell you the tip of this month. Let's begin.

But first, January has been again an exciting month, because Nintendo, in its latest Nintendo Direct, has showcased upcoming and promising games in the works, many of them new and set to be released this year for its new console, Wii U. Among them are a new Yoshi game made out of soft and fine yarn; announces of a new Super Mario, Super Smash Bros. and, interestingly a new Mario Kart game. That's right, the eight Mario Kart game for the Nintendo consoles is on its phase of production and, along with the other said games, will be revealed at the E3, 2013. Hope that Nintendo make note to the lists of features the many we'd like to see for the next Mario Kart of my Holiday Special Issue, which was also regarded in The 'Shroom as the section of the month in the past issue. Thanks a lot all of you readers that liked the article! 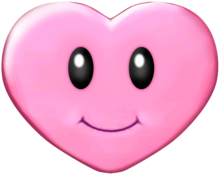 Protecting you against almost every hazard and use as you please. Now that's the power of Love!

Now, let's really begin with the topic. Today I'll talk about an item that was just made for this month. It's the Heart.

The Heart (please don't call it ♥, that's another thing from another game) is an item that has appeared only in Mario Kart Double: Dash!!, a special item that only Princess Peach and Princess Daisy can obtain, and also King Boo and Petey Piranha thanks to their ability to get any special item of other racers. A rare object that can be obtained at certain places, mostly according to the game mode is being played: In Grand Prix it becomes more common to obtain in a place below the third and in VS at any place below the first. Once obtained and then used, the character's vehicle is surrounded by a pair of hearts that last all along the race until having crossed the finish line in the last lap. The main function of these hearts consist to protect the kart to being hit, by absorbing the item dropped in the road that makes contact with them and give that item to the hands of either the rear player or the driver so they can use that later. That only works if at least one of the characters is not holding any item. In case the characters have items in their hands and hearts touch a dropped item, this will absorb the item and the heart flies away and fades. Items that can be obtained from a heart can be Green or Red Shells, Mushrooms, Bananas, Fake Item Boxes and Stars. Some special items can also be obtained like Yoshi's Eggs or Birdo's Eggs, the Giant Banana, Bob-Ombs, Fireballs and Bowser Shells. However, the hearts cannot get items like a Spiny Shell or the Chain Chomp, or protect the kart from obstacles of courses and the effect of items like explosions, stars or the Lightning.

While characters have at least one heart circling their vehicles, they cannot obtain another Heart item. Although the effect of this item can last indefinitely, falling to the void, water, lava, get stuck off the road or struck by the Lightning, will remove the hearts. Additionally, in the case of the fireballs, it's possible that the hearts disappear if the opponent that owns the fireballs attacks very near. This results that the vehicle that had the two hearts, absorbed one fireball each, but as five fireballs are released at the same time from the opponent character, the remaining fireballs will be able to burn the kart, now unprotected. Additionally as each heart took a single fireball, the characters will gain only a single fireball to use, instead of the usual five of the original.

Despite the ability to protect the kart against almost any item, it can be quite impractical when you're in a very low place and you're in a desperate attempt to get a more powerful item. Occasionally, with the heart item in use, if you touched an Item Box, but an item from the road touches the hearts eventually, you'll receive the item from the heart. The most convenient (and most professional) way to exploit the heart item is to get the special items of other racers. With a bit of skill and training, you can use the heart to "copy" the special items of your opponents to use against them in almost unpredictable ways. For example, outcome a trap by taking a Giant Banana or a seemingly dangerous Bowser Shell in the middle of the road. Another way to make a nice use of the heart is by having a partner character that has a different special item, specially Yoshi and Birdo and their special items, the eggs. As you know, eggs may release a variety of items from within when they break open. With the heart in use, you can get those items from the eggs without to worry about that another rival has plans to steal them and with the advantage to store that item to use it in needed situations, especially when a Star comes out. Get lucky finding a Lightning in the road when using the heart!

And that's all Shy Guys, see you later for another round of tips here in theMario Kart: Wheel Tips Corner in The 'Shroom.