Hello everyone, welcome to another installment of Music and Artwork!

A small change this time around: Ralphfan (talk) has been fired from Random Image of Month. Taking his place starting this month is Paper Yoshi (talk).

That's pretty much it. Enjoy.

Today's Character of the Month is the Ancient Minister from the Subspace Emissary mode of Super Smash Bros. Brawl. Not much to say about him without giving a little history of events involving him in the gamemode, but that' might be going out of this section's jurisdiction too much seeing as one of the reasons I picked out the Minister is because he's a fairly unknown and obscure antagonist throughout the story. Eventually it turns out he's R.O.B. and he joins the team (technically, this should not be a spoiler, as you wouldn't be a new fan here without playing Brawl). All because of some nice emotional scenes involving the ritual sacrifice of R.O.B. citizens for the glory of Mother Subspace (and a betrayal or two). And so, because of the emotional scenes and his initial obscurity, the Ancient Minister gets Character of the Month for June 2012! 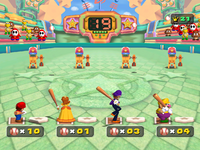 Hello readers, and welcome to Random Image of the Month!

This month's image comes from Mario Party 5. It depicts Dinger Derby, a 4-player minigame, in which the objective is to hit baseballs thrown by a pitching machine. Players should try to hit as many baseballs as possible, aiming for victory by hitting the most pitches among all four contestants.

Game Over music is a bitter-sweet affair. It means defeat. In the original Super Mario Bros., it meant you had to start the entire game over. In Super Mario Bros. 3, it meant having to start the entire world over. Game Overs could be even more drastic for lazy or cocky gamers in RPGs such as Paper Mario, as it meant the erasing of all progress made since the last blue Save Block had been struck. In more recent 3D adventures, such as Super Mario Galaxy, a Game Over meant... absolutely nothing. Yes, the penalty for a game over has softened over the years, but the catchy tunes that go along with them are what make them bitter-sweet. You may watch some of my favorite Game Over tunes in this order: 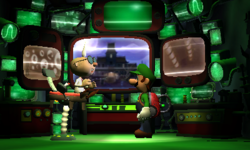 Hello fellow 'Shroom readers! For this month's Screenshot of the Month, I've picked out a screenshot from the upcoming game, Luigi's Mansion: Dark Moon.

The game was shown recently at E3 2012, and it looks like another must-have for the 3DS, so I thought it would be appropriate to choose a picture from the game. This game is going to feature more ghosts and more mansions than the first Luigi's Mansion, and it's up to Luigi to capture those ghosts with the Poltergeist 5000. In the picture, we can see Professor E. Gadd, inventor of the Poltergeist 5000, in his lab with Luigi. The lab is redesigned and looks a lot more high-tech than in the first game. The graphics look pretty good, compared to a lot of 3DS games. Dark Moon certainly looks like a worthy successor to the first game, and it's my most anticipated Mario game as of now.

Alrighty. Tune in next month for yet another Screenshot of the Month! 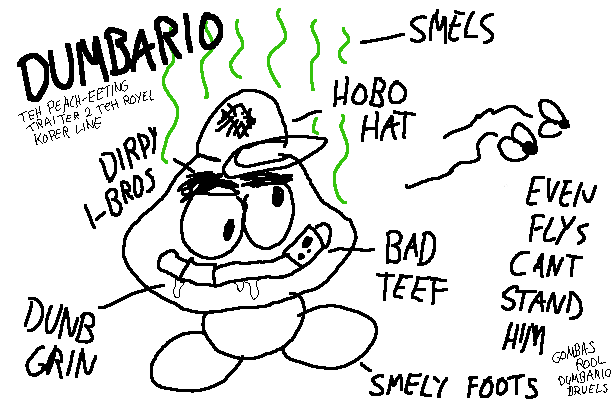 For this month, I have this enemy for you: a Drillbit Crab from Mario and Luigi: Bowser's Inside Story:

. It's June, and we are all getting out of school and hitting the beach, whether in real life, or just in the Marioverse. When you're on Plack Beach, don't let these little guys catch you by surprise. They can hurt!