Today, the beach is closed because of wacky races, invasive ducks, and a lot of garbage from the Item Boxes.

Hello Shy Guys to the Mario Kart: Wheel Tips Corner, where your friend Coincollector is here to tell you the tip of the month.

Peach Beach is the second racecourse of the Mushroom Cup in this game, and it is one of the easiest to race. The track is located in a shoreline that resembles Gelato Beach and several other places of Isle Delfino from Super Mario Sunshine. Like any other course in the game, Peach Beach has its hazards, and those are the Cataquacks that wander on the beach part of the course. Cataquacks can be very territorial and will chase any racer very near to them to fling their vehicles into the air. Fortunately, Cataquacks are slow and are suceptible to being hit by any item like a Banana or a Koopa Shell, leaving them grounded upside down for some seconds when hit. Another hazard is the water that makes vehicles slower as they go deeper and get stuck if the vehicles touch the deepest and darkest spot, sending Lakitu to get you back to the road. The tide changes the layout of the beach regularly. You can go faster when the water is low and the flooded area is accessible. As side note, Peach Beach is also the place for the trophy award ceremony after completing every cup in Double Dash!!. 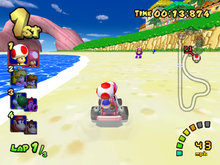 Take advantage of the low tide to take great shortcuts like this. And remember not no touch those alien-ducks. 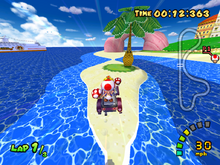 Watch out for the tide when taking this side.

The course starts near the town on a long and straight stone road with grass to the sides and palm trees. The road then bends gently downhill to the right that sends the racers to the beach and passes next to a dock. The first series of item boxes appear in this corner. The beach is wide, so racers can make their own way to reach a giant pink natural arch at the end of that area. Watch out of several Cataquacks walking around. Below the arch there is a handful of item boxes to get. Swerve to the right and racers will see another part of the beach also infested with a pair of Cataquacks. After that, racers take to the right again to return to the stone road of the town. The road sends racers uphill with the last series of Item Boxes that move sideways and then pass next to the fountain of a great Pianta that is situated in a part next to the track. Right over there is the line to complete the lap.

Peach Beach is known for having other alternate routes in several parts of the track. In Mario Kart: Double Dash!! It is possible to find a hidden Warp Pipe in the first corner to the left. Entering the pipe, you'll get a Double Item Box floating high in the air, while you will land back on the corner. While entering the beach, you can go to the left and find a ramp to get a boost and take another Double Item Box over a small island with a palm tree in the middle. Right before the starting line there is a passage behind the fountain that racers can get and find a pair of Double Item Boxes there. However, all of these routes do not work as shortcuts and actually, they cost more seconds when you take them. Just in rare occasions, using the warp pipe can prevent you to be hit by an item (seriously, any item), while the ramp can be used especially when there is low tide, as the island usually is surrounded by water.

Sun, Surf and Karts... Have you noticed that ship somewhere else?

Peach Beach makes a reappearance in Mario Kart Wii as the third retro course of the Shell Cup . The track has been redesigned a bit. It doesn't have the warp pipe route and instead it has a jump ramp in the dock near the beach to perform tricks and reach the other ramp in front of the small island. The path behind the fountain is still there, also. The Mario Kart Wii version has a one Cataquack more in the beach and when they are hit by an item, they bowl over in the air and continue walking about once they land.

And that's all ladies and gentlemen. See you next time for another tip the next month in the Mario Kart: Wheel Tips Corner.