From the Super Mario Wiki, the Mario encyclopedia
< The 'Shroom:Issue 151
Jump to navigationJump to search

Welcome to the spooky October edition of the 'Shroom! Thanks so much for reading this month!

Well, I finally finished Astral Chain. It was a Platinum game all right- a little too short. As usual. Daemon x Machina was fun, until I had a near rage-quit and decided to keep my blood pressure down. Now I'm just waiting patiently for Sword and Shield. I'm SO excited!

This month, unfortunately, Hooded Pitohui (talk) had too much life on his plate to be able to write Mario's Boombox, which I can relate to. Don't worry, though, he's promised good things for December, so no worries! In the meantime, I'll let you get to what else we have to offer.

Yoshi876 (talk) keeps up his win streak with his What's on the Box? section looking at the boxart for Dance Dance Revolution: Mario Mix! A big thank you to all our voters, and please do keep it up! 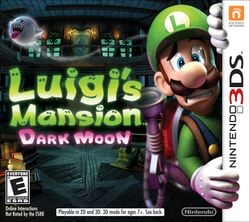 Spooky season has well and truly set in, and I'm sure that we are playing many horror games, whether they be full of jump-scares, creepy environments or spooky ghosts with kooky professors. For this edition of What's on the Box? we'll be looking at the latter kind of game as we delve into Luigi's Mansion: Dark Moon, or as I, a Brit, call it, Luigi’s Mansion 2. At least our naming conventions won't look weird when the new game releases.

The boxart mainly only features Luigi, a Boo in what I presume is the Gloomy Manor with a painting the background that the Dark-Light Device could be used on to summon some Spirit Balls and reveal a surprise. One thing to note with the boxart is that I absolutely love how Luigi is just peering around the corner gripped onto the game itself. Perhaps he's warning you about how scary it is, meanwhile an actual ghost zooms behind him without him noticing.

One thing I would've liked for this boxart to have done is to have shown off how different it is from the original. I can't expect each and every mansion in the game to be featured, but out of the window it would've been neat to have seen either the Old Clockworks or Haunted Towers poking out. It would also have been nice to maybe see some of the main ghosts you'll be fighting like Greenies or Slammers or Hiders instead of just a solitary Boo. And speaking of Boos, maybe King Boo could've made an appearance on the boxart as well. And furthermore, with the boxart in the library section maybe a Poltergeist could've shown up, just for more spookiness.

I do like this boxart, and I think it does a good job at communicating what the game is, but maybe a bit more scenery wouldn't go amiss, unless the Spirit Balls have managed to hide them all again.