From the Super Mario Wiki, the Mario encyclopedia
< The 'Shroom:Issue 136
Jump to navigationJump to search

Recently, Octopath Traveler came out, and I have really been loving it. The music is stellar, the graphics are gorgeous and the team mechanics are fun to use. My only real complaint is the boss battles can get a bit long and boring, but it could be worse (it could be Yiazmat!). Either way, if you love RPGs, don't miss this one, it's a real treat.

This month we are featuring our artwork sections! All of our writers have put their best work forward, so I won't keep you any longer!

WOW was this a close one! We have tie this month, between Hooded Pitohui (talk)'s Mario's Boombox section on Levar Allen's music and Henry Tucayo Clay (talk)'s Take Cover! variety section. The Pyro Guy (talk) was a close runner-up with his updates on Ongoing Fan Projects. Thank you to everyone who voted, and please continue to vote!

It's all Aces this month!
[read more]
Pyro updates on artistic endeavors around the community!
[read more] 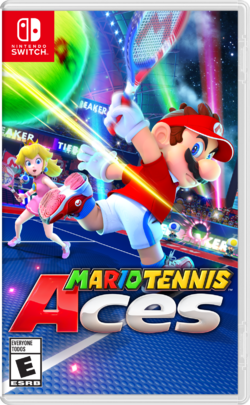 I hope you enjoyed the E3 conference this year. It looks good to me, but sadly not many Mario games were announced, which means less boxart for us to cover in the future. But no matter, one new game that is coming to us is Mario Tennis Aces as it releases later this month.

Ordinarily I might complain about a boxart like this being a bit bland, but I think I'll take a break from that this month because this boxart is insanely beautiful. I love how the night sky looks, and how the lighting effects are seen on the court, with some even obscuring parts of the audience. I love every ridge on the court floor, the fact that the TVs on the side are showing that Mario and Princess Peach are at a tiebreak point in their game, and the reflection in Mario's eye; although it is a shame that another competitor is not reflected in it. I also love how some members of the crowd are showing their support for Mario by wearing his iconic hat, but it looks like they're less fussed with the Princess being there seeing as none of them are wearing crowns or any of her other adjournments.

That's not to say that some improvements can't be made. Like I said, it'd be nice if another competitor, Luigi for example, was reflected in Mario's eye. Also, as much as I understand why a generic court was used, it would have been nice to have seen a less generic court and one of the more unique ones. But other than those mine nitpicks, this is a truly stunning boxart.