From the Super Mario Wiki, the Mario encyclopedia
< The 'Shroom:Issue 108
Jump to navigationJump to search

Welcome to the Fake News, which has diminished in size to the point that Fake New might be the more accurate term.

I've been busy this month so I can't really make a long editorial, so, uh, stay in school. Until you finish school. I'd assume then you'd have somewhere else to go. So you should probably go there instead. Now. 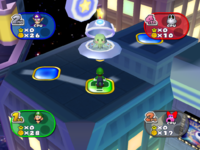 All that reckless saucer driving.

The biggest discovery of years gone by has finally been made: today the Mushroom Kingdom can finally confirm that aliens are real, even though they all died in a flying saucer crash á la Roswell.

The beings are described as looking like green jellyfish, which matches up with other sightings of them. The Mushroom Kingdom's best scientists are currently looking into the genetic makeup of these strange beings, whilst the police launch a full investigation into why the saucer crashed. Their current best theory is that DUI brought down the UFO. Sceptics meanwhile believe that the creatures are just spray-painted jellyfish who were thrown in the saucer in a bid to divert the Mushroom Kingdom's resident's attentions away from the bigger concerns: like how the princess can afford to constantly play golf in outlandish locations with several of her enemies.

News outlets have been flocking to site of the crash to try and get snaps of the downed saucer, but sadly we all quickly agreed that it looked like a generic flying saucer and therefore wasn't worth any of our times, so we quickly resorted to what the press does best: hound the local celebrities for their thoughts on the issue. Local banker, Wario said "As long as there's loot on that ship, I don't care who died getting it here." And local hero, Mario said "Mama mia! Don't look-a at me for this, I didn't jump up there and knock it out of the sky. Now stop taking pictures of the shiny metal on my shoes!"

And now, for the boring part of this obituary, as I collect various statements from the researchers who are working on the bodies tirelessly. "I haven't had a break in the three weeks that I started on this! Every single time I ask for one, they just laugh at me and tell me to keep working or I won't get paid for this. We're starting rumours that we might not get paid at all", was one researcher's response when I asked them whether they'd gleamed anything interesting from the autopsy.

Unfortunately, it seems I'm going to have to stop this obituary a bit short, there seems to be some form of electrical interference messing with my writing equipment; I have you know that my typewriter is very high tech........

Greet ings 'Shr oom read ers! We hav e tak en your obit uary writ er with us for a mon th to explo re the st ars. Do not fear, we wi ll retu rn him. 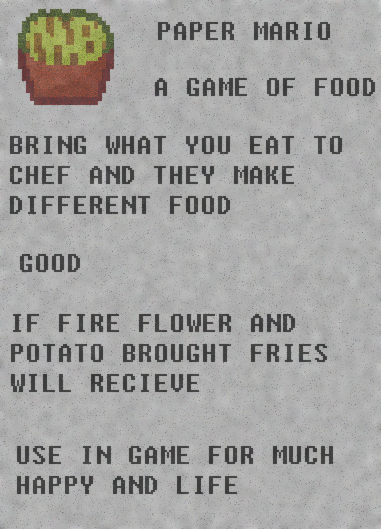 It's been a slow month for letters this week, which is fine by me. Gives me more time to play this sweet new Fire Emblem game. It's really great and... DID THAT ENEMY JUST GET A CRIT WITH A 1% CHANCE? Man, forget this nonsense.

I recently took an extended leave from my job to get some well-needed rest and relaxation. It's been a good few weeks; I've been hitting the beach a lot, then the pool, then the beach again, then splurging at shopping outlets using the company's credit card, then back at the beach. This has all been very nice but I'm quickly getting bored. I can't get the sand out of my hair, or between my toes, or my boxers, or anything really, and my sunburns are starting to get sunburns too. I really don't feel like coming back to work early, but I'm in desperate need for vacation ideas. Can you help?

Dear Antoine, Every beach I've ever been to offered parasailing, water skiing, and jet ski rentals. Maybe try that? Take in some tourist-y kinda stuff. Most beaches have pretty cool aquariums if you're into that kind of thing. Also why are you wearing boxers on the beach? Get a pair of board shorts. Really had no idea handsome magikoopas got sunburns; not necessarily saying you are one but it's a hunch I have. Nobody said you had to come back to work early but if you're tired of the beach then maybe you could kind of "road trip" your way back home. Take the scenic route as they say.

Also, don't spend too much money on someone else's card. They WILL find out.