MINIMARIOLOVER10: I can't do images, so, can someone please add more images? I did a major upgrade!

What are you saying?

The japanese version of this game added e-reader support. The game had space for 12 levels but only 5 cards were released. http://www.digitpress.com/forum/showthread.php?t=59183 Hdofu

I don't recall there being Klaptraps in this game; can somebody confirm this? --Marcelagus (T • C • E)

Klaptraps have a quite different appearance than the robotic Klaptraps from earlier Donkey Kong games, but their alligator-like appearance as well as their ability to climb ropes pretty much confirm them. Check this level. - Cobold (talk · contribs) 12:12, 4 March 2010 (EST)

I just noticed that all the images in the gallery section are beta images, heu, why? Isn't there a beta page to put them?

We may add description and images about each level. And create pages for the plus worlds.

Should we start this work?--

For expert levels, I suggest we start a new page for it. First give a brief summary of the levels in this page. Then create a link to the new page, saying the location of the main article. What do you think? -- 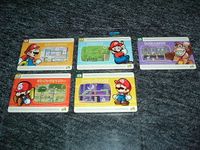 Here's a way to access the elusive e-Reader levels in an emulator on the NTSC-U version of the game: [1] This should aid article creation. Also see tcrf:Mario vs. Donkey Kong, so List of Mario vs. Donkey Kong pre-release and unused content can be created as well. --Wildgoosespeeder (talk) (Stats - Contribs) 20:59, 17 September 2017 (EDT)

Actually, I'm learning the levels I am referring to are internal while the actual e-Reader levels are a little different.
The cheated out levels are strictly going to go into that pre-release article. --Wildgoosespeeder (talk) (Stats - Contribs) 22:06, 17 September 2017 (EDT)

Bumping this. I'm not really sure where to go from here for level creation pages. In addition to Wildgoosespeeder's video above, this longplay video also shows most of e-Reader levels. Most of them. They are in order of appearance, using the translated names we have, as follows:
12. Climb and Fall
1. Revenge
2. The Long Way/The Loooong Journey
3. One Shot Blue/Athletic
4. Egg Attack
5. Later Gator
Unknown Fire Mountain level (similar to Hot Feet)
8. The Thwomplet/Thwomp's Fortress
9. A Tricky Candle
Unknown Mystic Forest level (similar to Danger Flowers)
Unknown Twilight City level
Unknown Mystic Forest level


Does not show Hot Feet, Boo in a Box, Key to the Key, and Danger Flowers, but it does show levels we do not have listed on the pre-release page. These are the options I was thinking of, and the problems that come with it:

None of these options are ideal. I usually create pages for levels I can play, so I'm going to make an exception here due to how these levels are accessed. Problem: Not all of the levels are covered. Looking for input, discuss.