The "Unbeatable World 1-2" glitch is nonsense. Poor positioning of the carpet is just a natural part of the game, and you can just make Pidgit respawn by going to the left briefly. In fact, you can do this while riding a carpet and kill a second one, and ride 2 carpets at once. There's a better glitch for you. --SpiderDave

It's worse than that, it's entirely possible to cross the pit by hopping on enemies without a carpet entirely.

If anyone else has done this glitch or knows about it besides me, please put more info and clarify. I am writing this from memory of over a decade ago and don't have my NES or Super Mario Bros. 2 cartridge or NES Game Genie to perform this anymore. I can't remember exactly but I think only after the flap on my Game Genie was broken I was able to put the cartridge in at an angle. I'm not sure if this works for other games as well.

There are many more glitches, off the top of my head:

As none of these seem likely to have been intentional (unlike tricks, such as picking a POW block in subspace and getting to keep it, bombs destroying miniture enemy-spawning vases, or reuse-recatch of vegetables) they probably qualify as glitches. Should all such be added? Splarka 01:05, 19 December 2010 (UTC)

One day, a long while ago, I was playing the All-Stars version of this game. I was in World 6-1, trying to carry the key out of the vase while avoiding the Phanto. Then, just as I exited the vase, I was hit by the Phanto on my last bit of health. The death fanfare played, but I exited the vase, seemingly unharmed. What was weird was that I had no hearts left, yet I was still alive. Glitch? Here's a screenshot of the aftermath. Note that I have no hearts.

In the Super Mario Bros All Stars SNES remake, when you are small your hitbox is still one above you, so characters walking above you (Like in sand) can kill you, as well as flying bullets.

This article refers to the glitches present in both the old and new version of SMB2 and I think it's a little disorganized with those two different categories mixed up into one gumbo of a page. I believe we should separate them into two separate sections: one in for the NES and the other for the GBA. What do you all think? Or do I need a TPP for this? Zero777 (talk)

I randomly threw a POW Block and picked up an enemy, then, in my hands the enemy died and was no longer in my hands. Then, I entered a Subspace. The same enemy was now back in my hands. This is similar to the Bob omb ambush glitch. It also works by entering another area. This glitch best works with Princess Peach.
The preceding unsigned comment was added by 208.54.70.136 (talk).

There is also a glitch that exists in the original and All-Stars versions where it is possible to climb up a vine or ladder while carrying a veggie. The player had to throw the veggie on at least two enemies and then quickly get to the vine or ladder and climb up and catch the veggie before they miss it, and if done correctly they will carry the veggie while climbing. I experienced it while on World 1-1. --PrincessDaisyFanatic3883 (talk) 00:12, 11 February 2015 (EST)

Sometimes when corrupting the game, it arrive that Extra life is writed wrong, like Extra Mife, Nife, Oife, etc. This is possible only in the computer Virtual game. --MetalMario2 (talk) 16:14, 23 May 2015 (EDT) 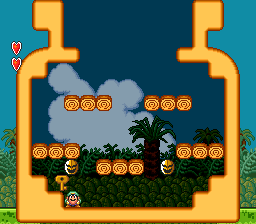 Stuck under a key.

You can throw a Key onto a platform with a little bit over the side of the platform then you can get stuck underneath the key. I did it in world 1-2.

It's a relatively new discussion. It helps people know that there is a discussion going on by putting it here. {{talk}} is what allows it to show up. Categories show up at the bottom of the page. --Wildgoosespeeder (talk) (Stats - Contribs) 22:19, 1 February 2016 (EST)

From what I can tell, we are debating if this should be included in the list of glitches. I say yes, but I am often unsure what makes good reading material for any page on MarioWiki. I'll let writing-savvy MarioWiki editors take care of that. My thing is uploading good quality images, which I see is lacking oftentimes. --Wildgoosespeeder (talk) (Stats - Contribs) 17:45, 2 February 2016 (EST) 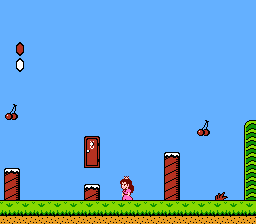 Is this a glitch? I threw a potion onto a POW-Block and then threw the POW. I did this in Virtual Console version.

Can you replicate it?

It's been removed. The Pidgit can also be respawned by moving back to the left and to the right again.