This is not a forum for discussions about Baby Peach. Please ensure all comments are related to improving this article because questions such as "Who is your favorite character/team/area in this game" are not allowed and will be removed on sight. Please use the Mario Boards to talk about Baby Peach.

Is this true? That well be the first. Is this offical? I checked the only source they had. Is there any more sources? (Mabye they might make a Baby Daisy.) Princess Grapes Butterfly 21:31, 1 February 2008 (EST)

There's official artwork and footage for Baby Peach. I hope the Baby Daisy thing is real! Rosalina, Baby Daisy... if this whole "casual gaming" kick means more female characters, I'm for it. The Mario series has always been too full of male characters. Stumpers! 00:39, 9 April 2008 (EDT)

Yes, Baby Peach is real. Baby Daisy was made as means of being Baby Peach's partner, in the same way Toadette was made to be Toad's partner. And, IMO, Rosalina is epic phail. Same with Lanky Kong and Bowser Bones. WHERE IS DIXIE KONG?! Honestly. Well, Rosalina is OK, I guess... So long as she doesn't make any MAINSTREAM appearances, God forbid. My Bloody Valentine

I think this discussion would be better had on the forums, but here's a way to steer it back on subject -- are their partner karts in MKWii? B/C you mention that Baby Daisy is Baby Peach's partner... hmmm... Oh, and it's going to be so hard to tell apart Peach and Rosalina. Stumpers! 00:45, 9 April 2008 (EDT)

I'd like to move this discussion to the forums, but I'm really too lazy to go there, so I'll stop the discussion altogether. :P My Bloody Valentine

Umm guy I been knew that since March! That message was written in Febrero 1 2008.

Scary she has no nose!

How do we know Yoshi's Island DS came first? MisterJaffffey

Mario and Luigi aged from Super Mario World 2: Yoshi's Island to Mario & Luigi: Partners in Time, where they no longer wore diapers and were capable of adventuring independently. The brothers appear the same in the original Yoshi's Island and the sequel. Stumpers! 02:27, 20 July 2008 (EDT)

Has it been proven that her design changes as she grows up? I mean, she's still Baby Peach, not "Toddler Peach". I think it should stay the way it is now, as it hasn't been proven if she's actually been growing up. Moonshine

I removed all uses of the term toddler using a search function last night. If you see any more of them, let me know, because I haven't gone through the entire article with a fine tooth comb. Thanks for identifying the speculation. Stumpers! 14:25, 20 July 2008 (EDT)

Don't worry about the speculation stopping by the way, it definately will. I accidentally reverted several good edits last night when trying to comply with MarioWiki policy on the organization of cameos and sports titles, so thank you very much. Stumpers! 15:10, 20 July 2008 (EDT)

Stumpers, I already explained to you why the sports and cameos should have no problem being in the biography. Did you see the FA comments?? Regardless of THOSE guidelines it should be understandable. Please respond directing your attention to this problem as this is aggravating.

This is why I wanted simple descriptions. When you have unnecessarily long descriptions, it messes up the page's layout.FD09

I actually lol'd at that! Thanks. You win on the second point. Let me check around and gather up any new comments you've made (I have to check edit comments, talk pages, and FA pages. :P) Before talking about the other point. Stumpers! 18:46, 20 July 2008 (EDT)

Haha. I think I'd better leave this page to you two. But one thing though, why is the Super Mario Sluggers screenshot in the personality section? Moonshine

Okay, there is nooooo way that the last section in the video game bio is speculative right now. Unless you want to change "time traveled" into "appeared inexplicibly in the future" but that's your decision. Either way I'm good. That section brings in both of the sports titles. If someone wants to read about them, they can move down a little. Would you like the sports section to be above the Super Show section? I really don't understand why you're saying that everything except the Super Show needs to be in the biography when the biography mentions both sports games. Anyway, here's the deal: even if you want to ignore MarioWiki:Chronology and put all the sections together, you're going to have another problem that you didn't have with Daisy: the Super Show. That TV show fits itself into the video games right after the Mario Bros. rescued Peach in Super Mario Bros. While you might or might not think it's canon (both opinions are valid... what are you gonna do), it does have a place in relation to the rest of the events. So, what I'm saying is this: either we put all the appearances together, like you want, and then add the Super Show at the end for consistency, or we keep it as it is. If we put everything together, that means that people like MarioKun are going to come in and give us trouble about their ideas of canon and such until the article loses its nomination. See why I'm having this delema? We've been asked by Moonshine to makes this article formatted like other articles, and I've done so. Daisy and Baby Daisy are the only articles that have been formatted in the way you're suggesting. Actually, neither should be an FA because of MarioWiki:Chronology, because the FA rules state that an FA must be in accordance with all policies, like Chronology. As long as one user notices us doing that and attacks us for it, we'll have to do it the old way or change that through a proposal. Stumpers! 19:09, 20 July 2008 (EDT)

Aghh!!! *beats you* This is so unfair! Technically speaking the Baby Daisy and Princess Daisy pages are fine to break this rule in a way due to the fact the characters have either only appeared in what is considered one platform game, or no platform games at all, but also technically they are as the rules are rules! And at the same time Baby Peach has the stupid cartoon to deal with because at the same time if you consider the spin-offs canon (they are) then you might as well consider that cartoon canon (hardly but still), and at the same time the cartoon would count as other media weather it continues 'canonly' (not a word) from the games or not. And then we have the conclusions that CAN be come to because of the fact babies are coexisting with their adult others in the same time period in both platform and spin-off games, aghghgREgaregeaw!!!!!! So many rules colliding with exceptions, and the cookies and pancakes and RARJFFJAAA!!*explodes* Gosh, I honestly am not sure what to do. Because I think anyone would agree that separating spin-offs from the srasaland section on the Daisy page would just be stupid, and separating the spin-offs from NOTHINg on the Baby Daisy page would cause a real rip in the space time continuum, creating a black hole RAtGRDsgz!! AGHH!!1 Okay, we can make this simple. Make it that making exceptions for the wiki's guideline policy for pagelayouts is ok for the fact that spin-offs are supposed to be separated in CERTAIN cases like the Daisy page(s). Considering Baby Peach has made more platform than spin-off appearances I think separating them is fine, right?

I think I get what you are saying: spin-off characters like Waluigi, Daisy, Baby Daisy, etc. (and Baby Peach and Rosalina if they appear in one more spin-off each) should be excluded from the rule. By the way, you gave me a whoping black eye when you beat me!! Ouchies! x_0 That sounds fine with me, because I would agree with you that separating Sarasaland would be stoopid. We definately should put your idea up to a proposal. If we do, I think we should put a minimum of "story appearances" (platformers, RPGs, etc.) appearances that a character needs to have before the separation is used. Like, maybe three or something. Thanks for being so cool about all of this and seeing eye to eye with me about why I was separating the article like this. Rest assured that when Baby Peach becomes more of a staple spin-off character and not-at-all a main series character I'll be there to reorganize the article with you. So, for the article right now, just to get it featured, are we okay with leaving it like this to satisfy MarioKun and MrsDaisyLuigi? After we satisfy them, we can work on the proposal on our talk pages, and when/if it passes we can make changes? Still, I've always thought it would be very cool to have part of the Daisy page that explains her overall tennis/golf/kart technique and how it has changed over time. What do you think? Maybe we can do both!!! Stumpers! 01:32, 21 July 2008 (EDT)

Agreed, sorry about your eye (gives pirate eye-patch), agreed, agreed, etc., blah blah, what? This intrigues me, but I don't get what you're saying: "I've always thought it would be very cool to have part of the Daisy page that explains her overall tennis/golf/kart technique and how it has changed over time".FD09

Arg, matey! We can talk about this more on other talk pages, but I was thinking that a section comparing Daisy's tennis style in Mario Tennis and Mario Power Tennis would be cool. You know, because she's changed a lot over time. I think I remember her being faster in Mario Tennis 1 for example. Stumpers! 22:22, 21 July 2008 (EDT) 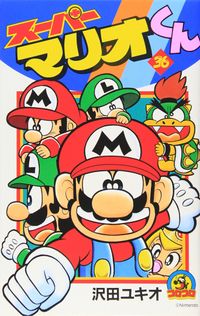 Okay, that's one question answered, so it's a definitely that this needs to be mentioned. But now, we need someone who has said issue and help us out in understand her involvement in that issue. Until then, I marked this part of the talk page as urgent, as you already noticed. --M. C. - "Mario Gals" Fan! User Page | Talk Page 21:34, 14 May 2011 (EDT)

Unfortunately, I lack the issue, so I can't help any further :(

The following is a sentence from Baby Peach's article under Yoshi's Island DS:

A Toady enters her through a tower window and steals her away.

"Castle" needs to be added between "her" and "through". Unless someone hovers over the highlighted "her", I don't think anyone will get that this is referencing her castle. EmeraldRayquaza