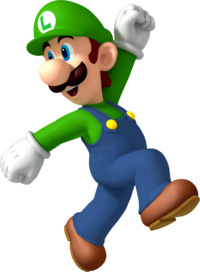 Hello users of the Super Mario Wiki! Welcome to my December comparison! Since the holidays are coming up, I've made a special comparison for all of you, Luigi the green plumber vs. Yoshi the green dinosaur! Both of them are Mario's sidekicks, they both have the flutter jump, they're both green and they have their own game but what's so different about them? Let's find out!

Luigi has green clothes, blue overalls, a slim mustache, a green hat with an L on it, brown shoes and he's very skinny.

Yoshi has a huge nose, red shoes, a red tongue and a red seat on his back.

Luigi is very timid and he has an extreme fear of ghosts. He's a coward and will always run and hide when extreme danger is afoot. He is jealous of his brother, Mario and would wish he's the hero.

Yoshi is very courageous and he is never afraid to run into any type of extreme danger. He's not jealous of Mario and he's always willing to help him on any adventure. He's not afraid of anything.

Luigi has the ability to flutter-jump in the air for a short time. He can also jump very high, run very fast, shoot green fireballs and summon a thunderbolt.

Yoshi can use his long red sticky tongue to eat his enemies and lay them as an egg. His flutter jump can lift him into the air a little longer than a regular jump. He can also throw eggs, ground pound, and he can breath fire if a red shell is in his mouth.

Well, that's the end of this comparison. I hope you had fun reading this section as I did with you. Don't forget to vote for the new 'Shroom director! So, who is the best sidekick Mario has ever had? Press "Show" and find out!

LUIGI - Luigi is the sidekick for Mario. He is Mario's brother, he appeared in more games assisting the plumber than Yoshi and he has cooler powers! Well, that concludes my December comparison. I hope you have had a great time reading this! See you! Oh, and Happy Holidays!