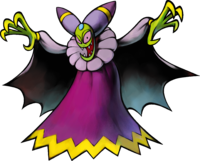 Hey, everybody! Halloween is almost here and I wanted to give you a comparison between two scary RPG villains, Cackletta and Elder Princess Shroob! Both are from a Mario and Luigi game, they're evil, they want control over the Mushroom Kingdom and they possess Bowser. What's so different about them? Read and find out!

Cackletta's Bowser form is Bowletta, a very dangerous Mario enemy. In this form, Cackletta can control her minions and the Koopa Troop. Her powers in this form include all of Bowser's powers, turn into Dark Bowletta, order the Koopalings to do her bidding, summoning meteor showers and even throwing fire enemies.

Cackletta's plan to take over the Mushroom Kingdom is to use the Beanstar to wish she was the ruler of the kingdom. In order to do that, she needed Peach's voice but instead, she got Birdo's. Near the end of the game, when she was Bowletta, she captured another fake Peach who turned out to be Luigi. In the end, she never managed to get Peach and take over the kingdom.

In battle, Cackletta can shoot lightning bolts, create duplicates of herself, create holes, and have her duplicates become bats! In spirit form, she can shoot magic balls.

In battle, she can heal herself 120, summon a Chomp, shoot energy blasts, cause shockwaves and tackle the bros. In her true form, she can attack using her tentacles.

Cackletta is a very demented villain and all she wants is to have a beautiful voice so she can become the Mushroom Kingdom's Queen. She is also very sneaky, she disguised herself as Lady Lima to make the plumbers fix the castle's plumbing and she possessed Bowser, making her even more powerful! She also has an insane laugh.

The elder princess loves her sister very much and she can be kind most of the time but when Princess Shroob died, she became really furious and started to avenge her. She is also very destructive, as seen in the battle with her.

Now who is the best RPG villain? Hmm, well if you want to find out who the character of October is, press "Show".

CACKLETTA- "Eyeah, ha, ha, ha! I won! I won!" Be quiet, I'm doing the comparison! Anyway, Cackletta is a lot more sinister of a villain then the elder princess. Her Bowser form, Bowletta became one of the most dangerous Mario enemies we know today and her personality is tremeoundous! See you in the November issue!