From the Super Mario Wiki, the Mario encyclopedia
< The 'Shroom:Issue XXVI
Jump to navigationJump to search 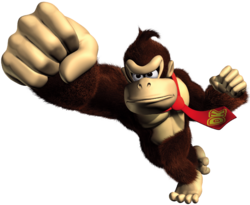 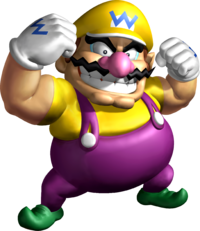 Hey, everyone and welcome to another one of my Character Comparisons! This is the first time I'm using someone else's idea, White Knight and I'm dedicating this comparison to him for his retirement. Now today, I'm comparing the two powerhouses of the Mario series, Donkey Kong and Wario! Both of them are strong, have their own series and have a lust for one thing, bananas for DK and money for Wario. So which one of these two will take home the gold? Read below and find out!

Donkey Kong is a gorilla who wears a tie with the letters, DK on it. He also has hair shaped like a banana.

Wario is almost identical to Mario but with a yellow shirt with purple overalls. He has a pink nose a mustache shaped like a "W" and a yellow hat with a "W" symbol on it.

Donkey Kong first appeared as Cranky Kong in the very first Mario game created, the one that started it all, Donkey Kong . He was kidnapping Mario's girlfriend, Pauline because he thought she was, "pretty". That game really reminds me of King Kong, except the girl is defeating the ape. Anyway, back to the comparison. Cranky didn't have the tie, or the banana shaped head, he was just a normal, naked ape. His first appearance as the current Donkey Kong was the sequel, Donkey Kong Jr.. It wasn't as good as the original but the story got switched. He was saving Cranky Kong from the one and only, Mario! Duh, duh, duh!

Wario first appeared in the game, Super Mario Land 2: 6 Golden Coins, another great game. He secretly stole Mario's castle in Super Mario Land while Mario was out saving Princess Daisy from his associate, Tatanga. Wario also appeared in other games that star him too, such as WarioWare. His first appearance is more story driven, since it doesn't involve coins to play and the adventure is longer then Donkey Kongs.

The Donkey Kong series is pretty fun, to me because it mostly involves DK trying to take back his bananas from the Kremling King, King K. Rool. Similar to Mario's Luigi, DK has his Diddy to help him on his adventures, I mean this series is so similar to the Mario series! K. Rool is like Bowser but is into getting bananas, Candy is DK's love interest but doesn't get kidnapped while Diddy is Donkey's sidekick. So far, this series has 30+ games.

The Wario series is also fun but Wario has no sidekick this time around, instead, he's solo. His series mostly involves Wario collecting money and stealing riches. However, what is really interesting about his series is that the main character is a villain, exactly what I wanted in a Mario game!

Wario's history is pretty interesting. He and Mario played cowboy when they were babies and Wario has been the sheriff only once. He was still in love with money when he was a baby as well and keeps throwing tantrums. In Super Mario 64 DS, he allied with Mario so he could get Peach's treasure!

In the Mario games, Donkey Kong was a confused, villainous ape who likes kidnapping girls, notably Pauline but in the Donkey Kong games, he's a smart, banana loving ape who cares about his friends.

Wario is a greedy, money possessed guy with gross humor. He can get into tantrums sometimes and if he loses, he'll say something like, "I lost, to a bunch of losers!" He adores money and loves collecting it.

This one was hard, especially since they're both funny and strong but I've made up my mind of who won the comparison. If it is not the one you wanted, it's ok, there's still more comparisons coming. Click "Show" if you want to see who's our month's winner!