From the Super Mario Wiki, the Mario encyclopedia
< The 'Shroom:Issue XXIV
Jump to navigationJump to search

This month, actually read the section!

Hey everyone! This month's game is a classic:
Super Mario Bros. 3 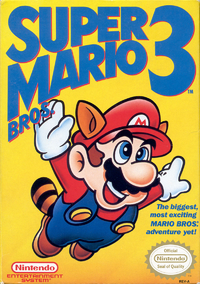 
1. Two unused enemies, a gold Cheep Cheep and a Green Parabeetle, were going to be common foes. Both were "upgraded" versions of their used counterparts, and could move much faster as well.

Dat der Cheep Cheep!
2. Koopa Troopas and Hammer Bros. were supposed to host minigames, instead of Toad. There were also supposed to be more New Super Mario Bros-like minigames. 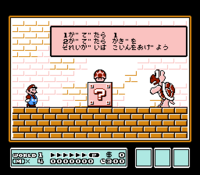 3. 15 extra levels were removed from the game. Some were similar to those already used, others were just plain weird. Oddly, a level can be seen on the back of the game box showing an unused level. It did not show in the coding, as well.
4. An unused power-up, a Toad-like suit, showed in the coding of the game. It's purpose is unknown, as the suit was not programmed to do, well, anything.

Pretty cool elements, huh? Here's what I think of 'em:
1. These two enemies, with higher speeds, and probably higher group numbers, would have made a real challenge. The Gold Cheep Cheep supposedly traveled in groups...Yikes. That's a wall of plumber-hungry fish coming for you! I betcha that would make you loose the Tanooki Suit you're wearing.
2. Ok, let's face it, that Koopa looks creepy! Anyway, these two guys were scrapped due to memory limitations, and well, good ridance! But who knows what the minigames would be? A random item generator perhaps, at least, that's what it looks like.
3. 15 new levels, eh? Well, that's 15 more levels of running around, trying to beat the clock, and dying in the process. How fun. Except for an extra challenge, there's not gonna be much of a difference. Well, longetivity is something Mario lacks these days, so I don't think it would've been a bad idea.
4. A Toad suit? That's just epic! Either it let's you run around the worlds as Toad, similar to SMB2, or maybe it gives a random power-up upon use. Better yet, a power-up of your choice! That is something I can live with.

Now before I end this issue, I'm gonna give the feedback option another go. Last month's feedback had only one response by our 'Shroom co-director, no one else. So, now I'll give it one more try, and if it's unsuccessful again, well, I'm not gonna waste my finger energy. So, if you have any comments, questions, or disagreements, post below! I may, or may not, respond! Well, that's all from me. Seeya next issue!

Brilliant article there! I would have loved a beta copy of SMB3.

Using a ROM patch provided by themushroomkingdom.net, the world 1 map screen will be replaced by a custom map leading to the extra levels and the glitch that made one unplayable will be fixed. Caution! Your Buddy Bill was here!