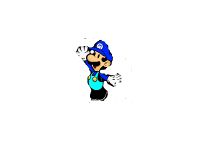 Me without my shyguy suit.
Error creating thumbnail: Unable to save thumbnail to destination
My current look.

Once upon a time on yoshi's island... the stork dropped both Mario & Luigi. But Kamek took me, as he did Luigi. Luigi got saved, but I didn't. Star child no. 7. I was there, locked up. I grew up in Bowser & Kamek's cell, and then I escaped. With the power jump of Luigi, I destroyed a prototype species of Goomba they were going to add to the Koopa Troop. I then forged an alliance with the Shy Guy Necroservers, a group of undead Shy Guys.

Okay, I didn't really do all that, but this is my character 'Mazzlebrozzle', and my account name. Anyway, the story continues...

The Shy Guy Necroservers soon met up with Yoshi- in the events known as Yoshi's Island DS- and in the disguise of yellow Shy Guy, I saw my comrades die. Angered, I struck at my older brother, Mario, who was riding the nefarious dinosaur. I soon saw the wrath of an egg, formed from comrade silver. I was out cold.

I soon woke up, and a cartooney character called 'Dimentio' extended his hand. I was in a strange green place. Dimentio called it Dimension D. He told me to remove my Shy Guy disguise, I did, and he mistook me for Luigi. He fought me, and lost. I had beaten him, but he retained his smile, and teleported me away, saying 'Ciou!'.

I wondered what Luigi had to do with him. Later, I spotted Bowser. I donned a Goomba disguise, certain he wouldn't suspect I was his ex-prisoner. He attempted to kill me... which was strange, but apparently he was attacking his own troop because of Nastasia... a hypnotist who served a higher villain than the Koopa King. I was determined. I jumped. My trademark jump surpassed Mario's, as it nailed Bowser. I ran, satisfied with revenge. I then retreated to a town called flipside. Chaos went on, but I chose to avoid it, and eventually peace ran through the veins of Flipside.

One day, I saw a Joker's hat. Then a head, and a body. It was the remains of Dimentio. I put him back together, as I wanted to learn black magic. I found a mushroom shake, and I restored Dimentio. He remains in my debt, but I am prepared for a betrayal. I now know all the black magic he does...

And so, that concludes Mazzlebrozzle's story.