Hello, ’Shroom readers! Welcome to this month’s edition of the Entertainment Section! This month, I am going to talk about two short Mario parodies, Hammer Bro. Mario, and Luigi in 60 Seconds, both parodies on Newgrounds made by Bigfoot3290.

On Newgrounds, both their ratings is T 13+. Don’t worry, there’s no swearing or themes in it. Just a little violence is all, with a HAMMER.

And really, he does!

Half of the scenes are Mario stabbing hammers into Toad’s or Luigi’s head. But there is one where Mario goes up to Princess Peach and she throws a Banzai Bill at him, thinking he really is a Hammer Bro..

My favorite one, of course is the one where Mario chucks a hammer at a Thwomp and it rebounds into his crotch. I especially like the :3 face the Thwomp makes.

One of the most notable features is the Super Mario World Hammer Mario sprites. These can be found at The Spriters Resource if you want them.

So basically with the ten funny outtakes about how stupid Mario can be, especially with a hammer in his hands, I recommend checking out this awesome movie. 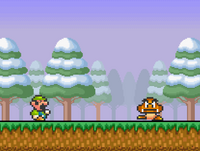 Newgrounds description: Luigi’s reign summed up in a single minute.

This time it’s Luigi’s turn to mess up. Luigi is always wimping out of great adventures (not to mention that time he totally embarrassed himself in Mario and Luigi: Superstar Saga when he impersonated the Princess). So now, there is a video of some of the worst times he’s been a total moron.

For the whole movie the famous Beethoven symphony (I forgot which one) is playing in the background. The funny thing about this movie is that for part of the song Luigi is actually ‘screaming’ along with it. Also, during the credits a bunch of Koopa Troopas are singing along with it.

It’s hard to describe the entire movie in words, except for the classic epic fail at the very end where Luigi jumps too early on a Goomba, so to really be laughing at it, just go see it. Don’t worry, it’s only 60 seconds of your life, and it’s worth watching anyway.

You may have noticed this was shorter than last month, because I’m a bit busy right now. Still, this is all for this month and see you in 4 weeks!