Why, hello there everyone! If you’re reading this, chances are you want to see Fading into Obscurity! Well then, that’s what you’ll get! This month I decided, due to a request from my new friend AxemGreen33 (talk), to review a mushroom with a special place in all our hearts. Remember, sending me requests is always possible if you want to see your favourite character, I am available on the forums by PM as “Constellation”, on chat as “MG1” and on the wiki here. So, this month I’ll be reviewing the not-so-tadpole, Mallow!

Mallow is a very old character from the very first Mario RPG, in 1996 (14 years ago), Super Mario RPG: Legend of the Seven Stars and since then he has never appeared again. I won’t focus too much on this but Geno also faded away, with a cameo in Mario & Luigi: Superstar Saga. Anyways, Mallow, in SMRPG, is Mario’s very first partner and the very first partner in any Mario game. He has powerful magic attacks and is apparently a...no I’m not kidding...tadpole from Tadpole Pond. After being saved by Mario after Croco steals his Frog Coin, he joins up. 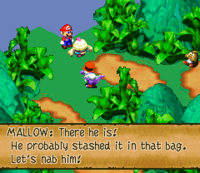 We need more pics of this guy...

Mallow has powerful elemental attacks with varying effects, from doing damage to healing. Throughout the game he can be equipped with new pants to raise his power. As he travels through the world, Mario gets more partners and more stars until they reach Nimbus Land, where Mallow comes back into effect. Apparently, Mallow is the prince of Nimbus Land and it is being taken over by Valentina and her overweight Dodo. Eventually Mallow saves the land, is reunited with his parents and then travels with Mario to go fight final-boss-guy. Then he decides to relax in Nimbus Land, and out of any further Mario games. Personally Mallow was my favourite partner in SMRPG (don’t hate on me for this, it’s not his attacks, I just like his humour) and I’m sad to say that he has faded into obscurity.