Boo, Mario Karters! It's me Coincollector, here to tell you the monthly tip of the Mario Kart: Wheel Tips Corner. First, I want to apologize for my absence of the last month as I couldn't connect to the web and submit my work. Hope that situation never happens again.

For this month I'll give you the theme of horror and fear. There are stories about a scary place, where specters and ghouls reside in. For no reason, this place was the prize of a gullible-looking and slim plumber who had no other choice but to visit that place to rescue his beloved older brother who disappeared in there and clear that place from the evil spirits. That's right, it's Luigi's Mansion... But not that Luigi's Mansion! Our lovable coward, after saving his bro, turned the place into a racing course. 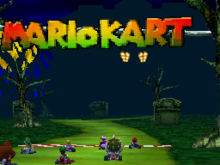 A nice yard for a nice house.

The course appears in Mario Kart DS as the last one of the Mushroom Cup. It's located in the mansion and its surroundings. Most of the race takes place outside, in Boo Woods, and for a little part inside the mansion istelf. In the haunted mansion, decorations tend to move, like the frames with pictures of boos shaking the frames and trying to get out of them, and ceiling chandeliers falling and rising crazily. However, despite their way to make you feel scared, they have no real purpose on the track. There is only one real obstacle in the course and are the odd trees that walk around, but they only appear in a small stretch of the track. Unlike other hazards that make roll out of control or bowl over, walking trees just stop you and block your path and there is no item, no Star or Bullet Bill, that stuns or destroys them.

Players start the race outside in front of the mansion in a yard with gravestones and dead trees. Just after the line, racers will meet an abrupt S bend facing to the right and then a straight section that leads directly to the entrance of the mansion. Before entering, racers will find the first set of Item Boxes in front of the entrance's stairs. Once inside the mansion, players enter to the Foyer and go straight downhill through a corridor over there that eventually bends to the right. The hall ends in the mansion's basement below the foyer, where once again racers must go straight. The area below resembles the Anteroom with a table in the middle of that stretch that serves as the path's median. Right after that another hall that leads the racers to go out of the Mansion. The hall is slightly curly and uneven, and has the second set of Item Boxes. Again outside, racers instantly swerve to the left in a curly pathway across the Graveyard of the Mansion. The trip in the graveyard ends after crossing a wall at the end of the curly path. The road bends again to the left into a swamp area. This is the only section with obstacles and gimmicks, which are the walking trees and the slippery mud covering mostly this part. The mud makes several karts to slide to the sides when trying to turn around, even if they try to drift. This section of the track is unusually wide and has some patches of ground that racers can take if they don't want to spend so much time slippering in the mud. The last set of items boxes can be found there in a patch of soil in the middle of the mud. However, this last set appears to be haunted as they move around in a circle. The swampy area finishes in a gentle curve to the left leads racer to the finish line to complete the lap.

Another view of the paradise, and better when you look at it in real 3D!

This course reappears in Mario Kart 7, as the final course of the Shell Cup, with some changes beside the usual graphic revamp from the Nintendo DS to the 3DS. The graveyard has a blue ramp to activate the kart's glider found over the grass and behind a gravestone to the left side of the road. The swamp also has a small hill near the item boxes section. On the top of that there is also a blue ramp and some Item Boxes floating there, ordinary dead trees were added along with the walking ones and are enough tall to block the path even to karts flying from the heights.

The course has no relevant shortcuts. However, the parts with curves outside the mansion has zones of grass that can be easily trespassed with a Mushroom or Star, for example the graveyard area or the S bend of the beginning. As I said before, the swamp has some parts of solid ground, but it's not recommended to go over all of them as you lose time and your place and in rare occasions, get lost in which way you're going. In Mario Kart 7 The wall located in the graveyard to enter the swamp has also a big hole to side of the gate that works as shortcut, but a speed booster is needed to cross the grass over there. 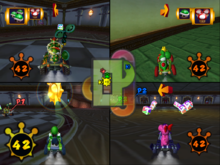 Don't you think that messy fights will bother the spirits?

Oh, but you thought that we were walking just about a race course? Luigi's Mansion actually made its debut in Mario Kart: Double Dash!!, but instead of a race track, it was a battle course that must be unlocked after earning the gold trophy of the Mushroom Cup in 150cc class. Unlike other custom courses that are basic and simple in layout, Luigi's Mansion is rather complex. The course is divided by three floors, the first one is a hall, the second one a spacious Ball Room where racers always begin the battle and the third is the terrace. The first and second floors have Item Boxes while the terrace doesn't and instead there is a large hole that make players fall into the second floor. The second floor connects to the others with tightly-curved corridors, three for the first floor and one corridor for the terrace. If you have some time to explore the place beside battling with opponents, you can notice the walls with portraits of several ghosts that Luigi met.

And that's all for this month. See you next month for another tip in the Mario Kart: Wheel Tips Corner.