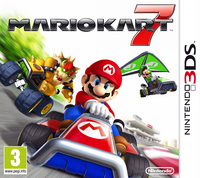 Mario Kart 7
Hey everyone! Welcome to this year's last edition of Should Have stopped making this joke a long time ago Been, where I discuss what, uh...should have been. And beta elements. Yay, beta elements! Yay, things!

So, I received no suggestions in the last month. But that's okay, because I have a game that I really want to cover today. It's only been out for about two weeks. It's for the Nintendo 3DS. It comes in a square-but-not-cube shaped box, which opens. It is a thing. Yay, thin- I mean, uh, today we'll be covering Mario Kart 7! 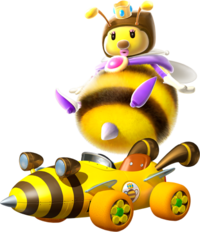 She's too big to fit in a Kart. She could cheat by stinging everyone else. Blah blah blah.
WALUIGI

I'm really enjoying Mario Kart 7 so far. It may not be the most challenging game, but it's very fun, especially online, and there are some challenging parts of it, like getting a great time in the Time Trials and whatnot. Sure, it might be pretty similar to the rest, in some aspects, but, it's really great, overall. But there's a lot of room for improvement...

First of all, Honey Queen being playable

<333333
wasn't that great a move, in my opinion. While I'm all for obscurer characters getting into the limelight, I think there are many better characters that could have been chosen, in this position. Like some of the characters in the sub-section below. I don't really have much against Honey Queen, but I think it would have been better to put her on hold for this game, and added someone better. Also, why was she called Honey Queen? I haven't seen her have that much to do with honey in the games, and a title with "bee" in would be a lot more fitting, because, she's, well, a bee. I think she should have been called, as in the Super Mario Galaxy games, Queen Bee. I liked the other newcomers, however. Especially Wiggler. 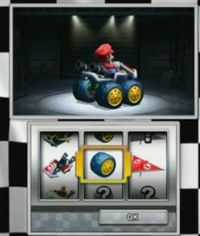 Mario's offended at your choice. He can't even look at you.

The Kart customization is pretty great. I'm a great fan of customizing stuff. Trying out different combinations with different stats, strengths and weaknesses is great, and unlocking stuff by collecting Coins gives me a nice sense of accomplishment. I do feel, however, one customization missing here would be colour. The colour of most Karts is the same for each character, with only the emblem changing. I feel this is a bad move, because the colour truly gives it a feeling of it being your own. Also, I think emblem customization in Mario Kart DS was pretty fun, but it's sad to see that didn't return in this game. I think it should have.

There's not really any image that fits here, so here's a Toad.
Next, onto a pretty big change, and one that was greeted with some negative press from the fanbase (for good reason, because it was a pretty bad thing to do), removing the best character, Waluigi removing single player VS. Mode. For those not in the know of Mario Kart terminology, VS. Mode is where you get to choose the courses, and conditions, you race against the CPU on. There weren't any advantages to removing it, and, since I usually played it in most other Mario Kart games, then I think removing it was a very bad idea. It should have been in the game (I mean, single player Battle Mode was in the game, so why not this?). 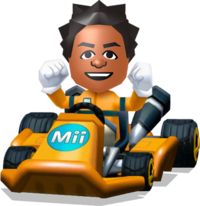 A Mii. Yep. Nothing to say here. Just a Mii. That's all. Really. OH MY GOD A DRAGOwait it's still a Mii.

Another Mii. And his Mii friends. Stop asking so many questions.

In my opinion, since the Kart customization thing was put in, a course customization tool would be a great idea. I think driving around in your own creations would be very, very fun. I think there also could have been something online, where people could post the tracks they make and play and rate other tracks. Track customization has gone far as back as Excitebike, so I'd say even the smallest amount of track customization would work great in this game. 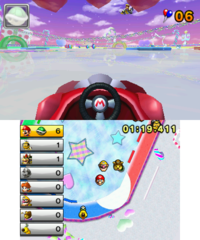 A few, smaller, minor suggestions now: when selecting a Mii, you still only can use the one that's selected as your Mii. While it's better than Mario Kart Wii this time around, in that, you can change the Mii that's used, but you have to go to the Mario Kart Channel (which is totally not a channel - how is it a channel?) and select "Change Mii". While it's possible in this game, it's still way too much work and annoying if you want to use a certain Mii in single player, but a different one in Online or Multiplayer. I think there should have been a way to select any Mii from your Plaza directly from the Character Select screen, which was possible with players 2-4 in Mario Kart Wii.

Sherbet Rink and Honeybee House are, in my opinion, both too similar. I'm not sure why I feel they're similar, but they're both not really that interesting, and I think something with more gimmicks and features would be a lot more fun and diverse. I like Wuhu Town, but there are two other courses based on Wuhu Island, and that, in my opinion, is too much. Wuhu Island Loop and Wuhu Mountain Loop, as far as I can see, would have been good merged, because both seem way too short for just one-lap courses. On the subject of courses, why doesn't Luigi have one? If Rosalina, or even Honey Queen, gets a course, surely the green man deserves one. And the the other green one deserves a course too, in my opinion. 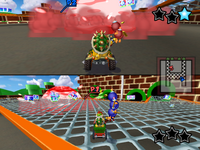 Bob-omb Blast
I think one of the two great Battle Modes introduced in Mario Kart: Double Dash!! would have been good to return. Bob-omb Blast was when players got points for blasting each other with Bob-ombs, and Shine Thief was where one Shine Sprite was placed on the course, and players had to fight over it, and keep it for the longest amount of time. They were both great fun, and better than Coin Runners (though that kind of fits Mario Kart 7 due to the unlocking of Kart parts with Coins). Finally, Mario Kart DS' Mission Mode was very fun, and I think that would have been a great thing to bring back. 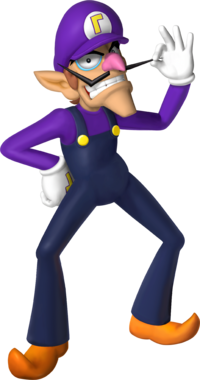 I think the 3DS is capable of having Downloadable Content (DLC), so some of these changes could hopefully be seen in a future download.

What WAAAAracters should have been in this game?

Since this game's pretty new, there aren’t a lot of Beta elements to cover. But I'll cover what we've got so far, and, if any more Beta elements are found, I'll be sure to cover them in the future.

Anyway, in the demo version, Alpine Pass and Mario Circuit had no ramp to activate the Glider, and no other ramps, because Tricks weren't confirmed to be in the game back at that point. The only items in the demo were the ones that returned from Mario Kart Wii (which is all of them except the Thunder Cloud, POW Block and Mega Mushroom). The Spiny Shell had wings in this demo. A Kart called the "Bullet Duck" was mentioned, but not seen in the final game, and there was also a "Banana Buggy", which is probably the Bolt Buggy, which remains as the "Banana Buggy" in other languages.

Well, that's all for 2011! Don't forget to PM me on the Super Mario Boards to suggest games for me to cover and because it's the closest thing I'll get on the internet to a Christmas present...have a great Christmas, and a fantastic new year, and see you in January!