Hello, ladies and gentlemen, today I will be telling you about the world. The world is a large sphere, which is mostly coloured green and blue. It is, as said before, a sphere, which is very smooth. It contains 100% of the universe's human population, and 5% of the duck population. Apparently, I'm also supposed to give you some Fake News, which I believe is completely ridiculous! Ridiculous, I say!

Anyway, Merry Christmas! Happy Hanukkah! Have a Chimptastic Monkey Day! And a great Rizal Day to those in the Philippines! And, when it comes around, Happy New Year!

I'd like to take a minute here to talk about a feature of the Fake News that doesn't get a lot of attention: the Fake Report, or News Flush. For this position, you won't even need to get a job to write. All you need is an account on the Super Mario Boards, our forum. Once you have made an account, send me a personal message containing your Fake Report. I will evaluate it, and, if it's good enough, you'll see it in the next issue. Sending me a personal message is also the way to sign up for a normal position on the Fake News, along with a few extra instructions that can be seen at the top of my talk page. 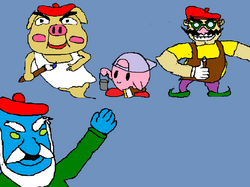 The contestants and Van Gore.

Last Sunday, Vincent Van Gore hosted his first art show at his studio where he allowed artists from all over town to participate. The prize for winning was for the artist's painting to be displayed at Vincent's next art show and a shiny trophy.

Sadly, only three contestants participated. First, there was Hoggus, some weird pig ghost. Secondly, the next competitor was Paint Kirby, world-renowned for his amazing masterpieces. Lastly, there was some fat dude who called himself “The Purple Wind”…whatever that means.

The contestants had 1 hour to paint whatever they wanted. After the time was up, the contestants had to hang their paintings on a designated wall while Van Gore judged each painting based on three categories: color, originality, and his personal taste.

Here's what the artist had to say: 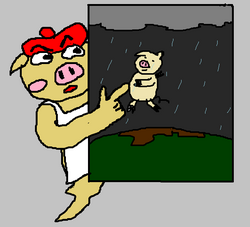 Van Gore: What do you call zis painting?
Hoggus: I call it…Swine Frolicking on a Rainy Day
Van Gore: Interesting…zee colors are kind of bland, but it's original to say zee least. It's a shame though, I don't like zee filthy swine.
'Hoggus:……….*jaw drops* 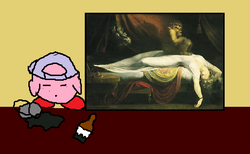 Paint Kirby and his…whatever that is 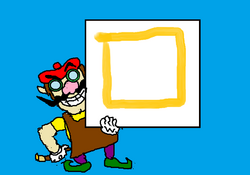 That mysterious fat dude and his amazing painting!


And so ends the section, see you all next time. 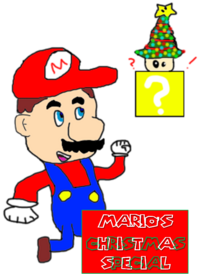 What happened to his hands?
It's Christmas, and this year, MushTV have finally caught on! Mario's Christmas Special is a special Christmas special especially done by special guest Mario. All of his friends, acquaintances, enemies and Waluigi gather at his house for a fantastic Christmas party! There's going to be singing, but hopefully the interviews, sketches and other fantastic events make up for that! There's also going to be celebrity special guests! Unfortunately, I can't reveal much else, as the plumber himself doesn't want people to know this soon. It will be broadcast live on December 25th, from 2:00pm to 4:00pm, on Mu...wait a minute, this is on FireFlowerCentral...ah, my notes must be mixed up...

Here's the real listing for MushTV: Miracle on 34th Pipe, a heartwarming film, is on throughout the month. When the Mushy's department store Santa Claus gets fired after getting drunk before a parade, Chris T. Ingle, played by Toadsworth, an old Toad they found on the street (that was talking about Toadsworth), has to replace him. He does such a great job, he replaces the previous Santa, and everyone believes he is the true Santa Claus. Except one little Toadette...don't forget to tune in on Mu- hold on a second...on Leaf Channel? Darn it, it must have happened again.

Ah, here's the MushTV listing...oh no, it's 'Shroomday the 13th? That's a Halloween film! Turns out they forgot after all! Well, a very Merry Christmas to everyone, and, to MushTV viewers, have a scary Hallochristmas!

Welcome all to another exciting month as we near towards Christmas! As you know, Mario has done a lot of games lately…wait, did I just say that? How awkward. Anyways, we are going to interview a character that has made a great appearance lately in one of his games. Let’s give a round of applause to Metal Mario!

BMB: So Metal Mario – you know, I’m just going to call you M. Mario for short for the interview. Anyways, have does it feel to get a first appearance?

BMB: Then explain to me how Baby Mario and Mario appear at the same time?

BMB: That’s impossible M. Mario, and we both know it.

BMB: Are you even able to do that if your face isn’t even a emoticon?

Random person in audience: You ask me.

Metal Mario: Am I done?

Random person in audience: I thought you just said that present you can’t talk to past Metal Mario?

BMB: You know what, M. Mario, I think we’ll have to end this early, I got to take care of someone first.

BMB: Well, enjoy the holidays. Now turn off the cameras so I can beat up that smart-aleck.

Hi everybody! Here’s your hostess, Chivi-chivik! And this is Cooking Guide, where we teach you how to cook excellent dishes!! So, let’s go!

Christmas is just around the corner, so this month’s issue will be...

The special dish of this special will be made by the sisters Tayce T. And Zess T.! So please get ready for a boom of Christmas sweets!!

Me: *enters slowly* H-hi?
Tayce T.: *hugs me* Hi!! How are you and your relatives?!
Zess T.: *facepalm*
Me: Eh... I’m fine, don’t worry.
Tayce T.: So... what are we going to cook this time?!
Me: *Taking out ingredients* We’ll need: A Honey Jar, a Pink Apple, a Cake Mix, a Ultra Shroom Shake and an Ice Storm!!
Zess T.: What’s supposed what are we going to cook?
Me: *snickers* ... You’ll do the Ultimate X-mas cake!! Well, that of ‘ultimate’ is a lie...
Zess T.: But this dish takes a lot of time!
Me: Nevermind! You two can do it in a flash!
Tayce T.: Okay!! We’ll do it!!
Zess T.: I... meh...
Me: *taking the notepad* I’m ready for write at light speed...
Tayce T.: You have to mix in a bowl with a blender the half of the honey jar and the ultra shroom shake. You’ll get a Shroom Syrup.
Zess T.: For do the biscuit of the cake you have to mix the cake mix with sugar, milk and some water. When you have all that mixed, put it in the oven for 40 minutes.
Tayce T.: For get the final fondant you have to mix the ice storm in the syrup. It’ll get a white color. When you have it, put it in the fridge and wait wait until the cake biscuit is done.

Zess T.: Take out the biscuit and the fondant and begin to cover the biscuit with the fondant.
Tayce T.: Remember the other half of the honey jar? Make a juice from the pink apple and mix it with the honey jar. You’ll get a thick dough. Make little balls with the dough and when you make enough put them in the icebox and wait an hour.

Tayce T.: Take the sweets from the icebox and put them on the cake for decorate.
Zess T.: This is the X-mas cake!
Me: *happy* You two are awesome!!
Tayce T.: Why don’t we eat a slice?
Zess T.: It’s not Christmas yet!
Tayce T.: Don’t worry! We can do another one easily!
Zess T.: *facepalm* 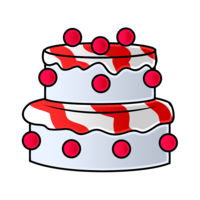 UltimateX-mas Cake You need: a Honey Jar, a Pink Apple, an Ultra Shroom Shake, an Ice Storm and a Cake Mix.

For the cake biscuit:

Mix the cake mix with some water, milk and sugar. Put it in the oven for 40 minutes. You’ll have to cover it with the fondant later.

Mix the half of the honey jar with the ultra shroom shake. Mix the result with the ice storm. Put the fondant in the fridge and wait for the cake mix (if the cake mix is already done, wait for 10 minutes).

For the decorating sweets:

Mix the other half of the honey jar with the juice of the pink apple until you get a thick dough. Make balls with the dough and put them in the icebox for an hour. Take them out and decorate the cake with the sweets.

Thanks for being here reading, until next Cooking Guide and Merry Christmas!!

Master KoopaKid: How did you first get into Mega Man?
Mega Man 2 was the first game I ever played aside from Tetris. It just kinda snowballed from there. Of course I had the original Mario games and I loved them too, but I just thought Mega Man games were more fun. They were more difficult, the levels were longer, I thought the music was better*, and the bosses were so much cooler. Koopalings? Who?

*No seriously. Go look up Skull Man's theme from Mega Man 4 on Youtube. You'll be glad you did.

Tulaash: Are you a brony?
Welp. The forum knows. Might as well let the rest of the community know as well. Yes, but I try not to be annoying about it. Keep the pony stuff in the pony threads.

MCD: What's your opinion on Christmas? Do you think it's over-hyped? What's your favorite part of it?
Christmas ♥. I don't think it's over-hyped at all, but I don't like how the stores start putting out the decorations and start playing Christmas music right after, say, Halloween. My favorite part is actually the food. There's so much good food this time of year, and Winter in general.

And with that, I'll be seein' y'all next year.