From the Super Mario Wiki, the Mario encyclopedia
< The 'Shroom:Issue 154
Jump to navigationJump to search

Not much to say this month. I just turned 25 last week, and now that I think about it and have checked it, I've been a member here for over ten years. WOW. I feel old now.

This month I've got another fantastic section from Yoshi for y'all, so I'll let you go read it! ~FunkyK38

Yet another win for Yoshi876 (talk)! His December What's on the Box? section analyzing the boxart of Donkey Kong (Game Boy). Thanks for your Christmas votes, and please keep it up for the new year! 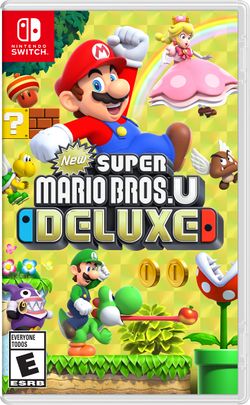 It's been a long while since we last looked at a boxart for the Nintendo Switch, but in our first issue for 2019, that is exactly what I decided to do. And to kick of 2019, we're actually going to be looking at a boxart for a New Super Mario game for the first time, if we exclude one of my first-ever sections with looked at New Super Luigi U.

And although the New Super Mario series often gets hammered by the fans for being too similar to its previous iterations, this boxart is positively bursting with content. However, even the boxarts for this series do just reuse some of the old content, as the Super Acorn on the blocks is exactly the same as on the original New Super Mario Bros. U boxart, just this time in the upper-left corner as opposed to toward the right-hand side of the boxart. And let's be honest, the Piranha Plant is pretty similar as well, although we can give that one just a small pass as that's not a whole lot that can be done with that enemy.

But what this boxart does well is show off how this game is different than its original version. Nabbit was only available as a character in New Super Luigi U but he's on this boxart to show how he's playable this time around as well, and Peachette is an entirely new character / power-up, and she has quite the prominent position. I'd say that she has a much more prominent position than Nabbit because of how she is entirely new, whereas Nabbit debuted in New Super Mario Bros. U although that time around he was an antagonist. One thing that might've been neat to show is Nabbit's invulnerability, which could have been done with having him superimposed in front of one of the enemies on the boxart. If it was my choice, I would've put him in front of the Piranha Plant.

Although I like the way the Piranha Plant is featured, I do think it's a bit lacking with the Paragoomba and the Paratroopa, as their appearance looks pretty random, especially the Paragoomba. The artwork chosen makes it look like it should be appearing on the ground as opposed to the air, and the Paratroopa looks like he's just having a pleasant time in the air, as opposed to trying to stop our heroes from defeating Bowser. And although I like the inclusion of Luigi riding Yoshi, perhaps instead of eating the apple, Yoshi should've been eating one of the enemies, that way they'd have something to do instead of just exist.

I'll admit to not being sold on the gold background, especially since I don't think there's any mode in the game that actually makes the background gold, and so the generic grassland sun would've worked better, especially where this is obviously the first world. But given how connected the world was in New Super Mario Bros. U, a lot more so than the previous games in the series, it would've been nice to have seen a little bit of connectivity, whether it be some part of the desert in the background, or the amazing star-studded sky from Frosted Glacier. But at least there's a pretty rainbow.

This boxart has its pluses and it has its minuses. It would've been great to have used more original artwork and not have strange instances like with that Paragoomba, but at the same time it does show off quite well how it is different from the original New Super Mario Bros. U. Overall, not a bad boxart, but some different artwork choices would've made it a better one.