From the Super Mario Wiki, the Mario encyclopedia
< The 'Shroom:Issue 154
Jump to navigationJump to search

ALRIGHT fine. Fine, you caught me. I was just gonna write something like "BYE" and then slip out unnoticed but I can't just do that. Well done. You've called my bluff.

First and most importantly: congratulations to our new Fake News director, Doomhiker (talk)! You'll do a great job, it'll be real exciting to see what you're gonna bring to the section. Just keep yelling at people until they start writing for you. The most important advice I can give is: win all the awards. Nobody tells you they can actually be exchanged for real money, like in real life. (Admittedly nobody tells you that because it isn't true, but one day I'm sure we - the Mario Wiki - can make it true.)

This is also a particularly special issue, and frankly the only time I could have retired ever, because this is my 100th Issue as director of the Fake News (apart from the times I got someone else to cover for me), after starting back in 2011 with Issue LV. I'll return in issue MCD, the 1400th issue of The 'Shroom, if I'm still alive. I can't tell how long it'll be until then, could be like a hundred years. Also we'd need to return to numerals.

Writing for The 'Shroom and then being part of the Core Staff has been an absolute blast over these nine years, and I've got many, many people to thank for that. Anyone who's ever written for the Sub-Team, for starters. It has been an honour editing Wiki coding into your sections or uploading hundreds of images or writing the word "thumb" so often I'm starting to forget it's even an actual human body part. But really, you're all superb writers, artists, etc., so keep doing what you're doing. Also thanks to Mr. Edo for getting promoted to Sub-Director and whoever was involved in the decision to give me the Sub-Team in the first place. Thanks to all the directors and sub-directors who in fact did not hold it against me when I forgot to send out warnings, many times. Special thanks to Perch and Turb who never held it against me when at least halfway through their term I still didn't know which one of them was the director. Thanks to everyone who reads and votes in Section of the Month, it is genuinely heartening to know that many people read this thing even though they're probably scrolling over this block of text.

Well, what can I say. Nine years ago, I never would have thought I'd be in this position, but here I am now, leaving Fake News! That's it. I'm done. I'm not leaving the community and I'll still write for The 'Shroom when I can, though I think now I have to actually submit my special sections, as opposed to just editing them in and hoping nobody notices.

Really wondering how many people are left alive in the Mushroom Kingdom at this point.
[read more]
Quizmelon tells us what to watch on the telly.
[read more]
I'm sure I've seen this guy before somewhere.
[read more]
The Pyro Guy cooks up a special meal for MCD.
[read more]

A lot of deceased.

A great calamity has befallen Grass, Desert, Water, Giant, Sky, Ice and Pipe Lands as all of their kings died at the same time. It is my understanding that they were all attending a conference on how to deal with Bowser and the Koopalings, following the failed invasion of their kingdoms. I do consider this to be a little bit strange, given the fact this invasion happened back in the 1980s, but seeing as they're all dead, it's not like I can actually press them on this matter.

The Kings were all killed when the ceiling of the building they were holding their conference in collapsed. Currently, it is unclear as to whether this was an accident or on purpose, and Bowser and the Koopalings were pressed on the matter, they all whistled and acted like they didn't know what I was on about.

It was known that all of the Lands were allied with the Mushroom Kingdom, and it was decided that Princess Peach should take full responsibility of those lands, growing the Mushroom Kingdom to be a force to be reckoned with. The Princess paid tribute to the Kings, saying: “They were all valiant rulers, but perhaps if they had listened to me in the first place and seceded their land to me, none of this would have had to have happened.”

There were unconfirmed reports that the Kings had been transformed, like during the Koopaling invasion, with some suggestions that were actually bricks in the conference hall to throw suspicion away. After attempting to talk to every brick there, I discovered this was not the case. In fact, the only thing I learnt from that whole expedition was that Toads really know how to throw strange looks at honest-working people trying to get to the bottom of the story. What do you do, Mr. Toad? Guard Princess Peach? Well, you're not very good at it, that's what I say! Apologies, I seem to have gotten a little bit off-topic.

Funeral proceedings are usually different in all of the Lands that lost a King in this great calamity, but now that the Mushroom Kingdom controls their borders, these plans fell to Princess Peach. All of the Kings will subsequently be buried in unmarked graves, and mourning for them is strictly prohibited. Also prohibited will be implying that Princess Peach and Toadsworth were in any way responsible for the deaths, and all blame should be directed at Bowser and the Koopalings.

We pass into a new decade, and all around us, everything is changing. And at the heart of that change is television, which is shifting into a new era before our very eyes. Except in the Mushroom Kingdom, of course, which is set in a static timeline with no process of aging or major periods of change, and hence television is exactly the same as it was in 2019. So without any further dallying on the complicated nature of time, let’s detail tomorrow’s top three shows! 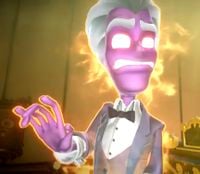 Amadeus Wolfgeist is the focus of The Last Sonatas, showing tomorrow on MKBC2.

New: The Last Sonatas of Amadeus Wolfgeist
MKBC2, 10pm
Genre: Fact-based drama
MKBC2 launches this interesting and compelling series on the life - and indeed death - of Amadeus Wolfgeist, the renowned composer killed in a freak piano accident at a young age, and of his musical work that has both charmed and haunted those who listen to it. This episode is the first of a four-part miniseries, exploring the true meaning and power behind Wolfgeist’s melodies.

Fun evening TV for everyone, Wheel of Uncertainty is on at 7pm on the Party Channel.

Wheel of Uncertainty
Party Channel, 7pm
Genre: Game show
One of the biggest game shows in the Mushroom Kingdom of the last few years (though you wouldn’t know, because I’ve never written about it in this column before), Wheel of Uncertainty sees contestants go up against a terrifying Wheel which determines how many points they have and their fate in the game. Competing today are Peach, Wario, Waluigi and Donkey Kong (recovering from his December notoriety), and Goomba returns as the show’s dry-witted host. 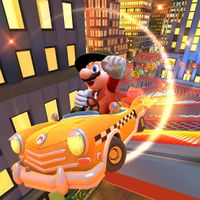 Expect lots of wackiness not usually seen in regular Mario Kart, tomorrow on the Karting Tour of the Decade.

NYC 2020s: Karting Tour of the Decade
MKBC Sports, 4pm
Genre: Kart racing
Every decade, the Mario Kart officials launch the ‘Karting Tour of the Decade’, where they rebuild one of our cities here on Earth and have famous Mario Kart racers speed through them. The 2000s opened with London, the 2010s opened with Tokyo, but this decade they’re driving through a mock-New York City to see who will claim the crown. Do watch this one, as nobody in the Mushroom Kingdom will get any of the references to New York.

And of course, all of your favourite Mushroom Kingdom shows that you can’t watch because they’re fictional will be returning, except Mushroom Kingdom’s Got Talent, which has been cancelled, and also anything starring Wario, because those are mostly awful. Have an excellent year - and remember, in times of crisis, the television is your friend. See you in February! Guess who's back. Or, back again. Well, it's me, so gather round, friends. 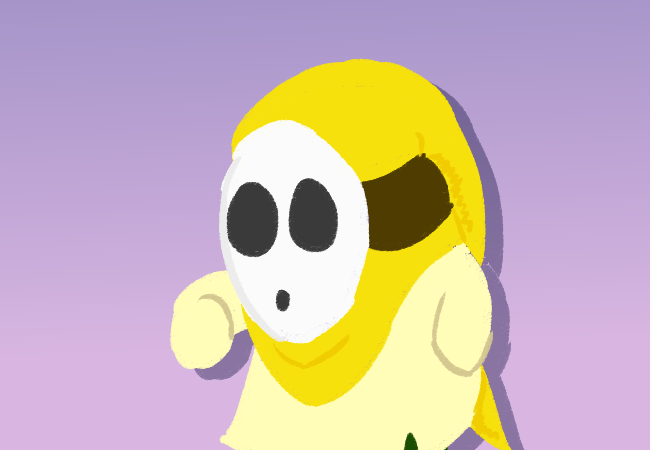 This month marks a very special and yet theatrically tragic moment. Long-time boss and absolute unit MrConcreteDonkey is taking his leave after this issue. He's pretty much ancient at this point! 100 Fake Newses directed is no small feat. That's roughly two thirds of this entire paper's history dominated by his presence. Either way, I'm proud to make my surely-anticipated return to my post as Mr. Cooking Guide to serve him a proper send-off meal. 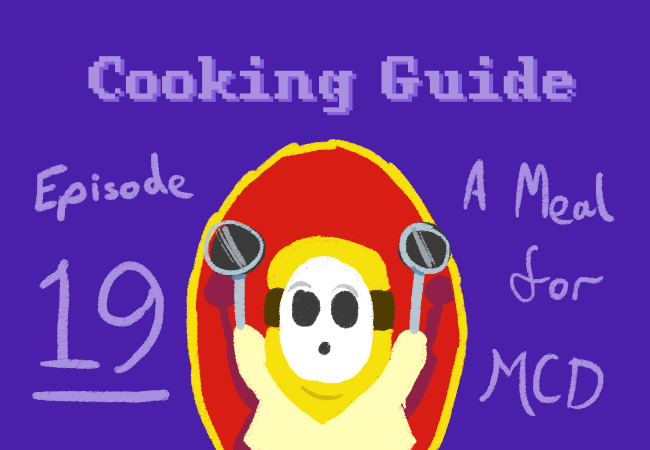 Yeah that's what we're doing this time. An MCD special dish. Welcome to the 19th TPG-branded instalment of Cooking Guide. 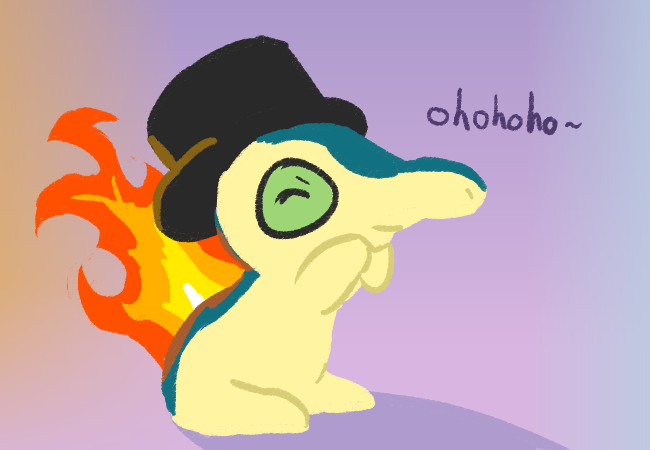 Now, the guy himself is one of an iconic design. What has been described to me as a 'very posh Cyndaquil' must surely be captured using the fine techniques of the culinary arts. I don't think I've done an episode on food portraits yet so this is the perfect opportunity to see what kind of meal I can make that just resembles the diner. A truly unique experience across any restaurant, I assure you. 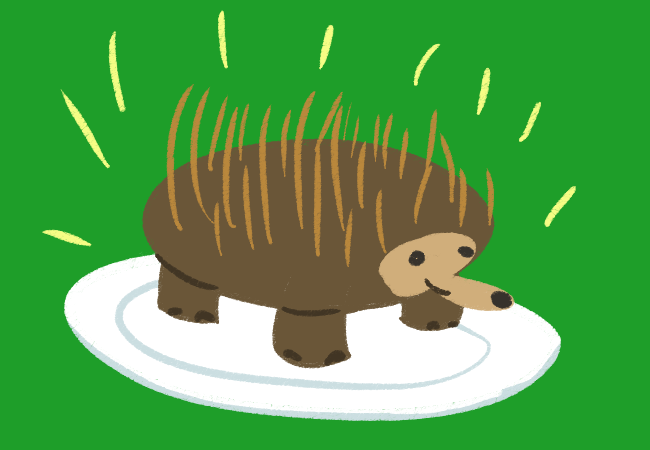 After doing some digging (Google), I surmised that the Cyndaquil Pokémon is derived from the real-worltd echidna, which is like a hedgehog, but... not. It's the closest match I have to MCD anyway.

So, this is what we're cooking with today. I'm told that echidna is best prepared by roasting it over an open coal fire, and served hot after taking out all those pesky quills. The thing looks like a cutie but I'm sure it can kill you like any of the critters they have down in Australia. Since we're trying to approximate MCD for this one, I thought it'd be apt to scorch the blazes out of our buddy here. Cyndaquils have flaming backs so the artistic accuracy will be unmatched. 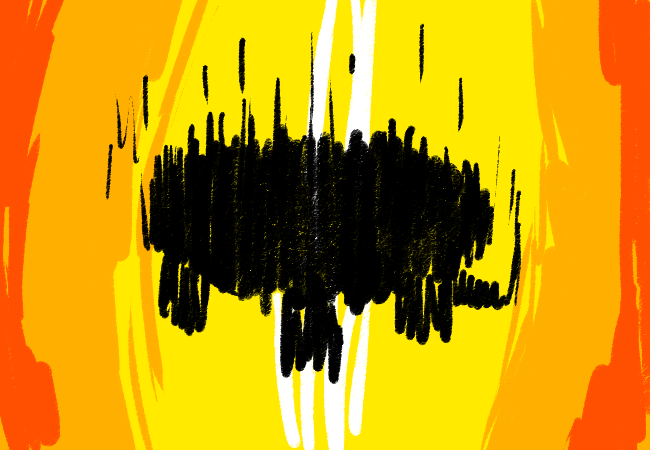 Yup, this is the plan. I'll actually get to this part on camera soon; I'm just visualising my chef's techniques, okay? 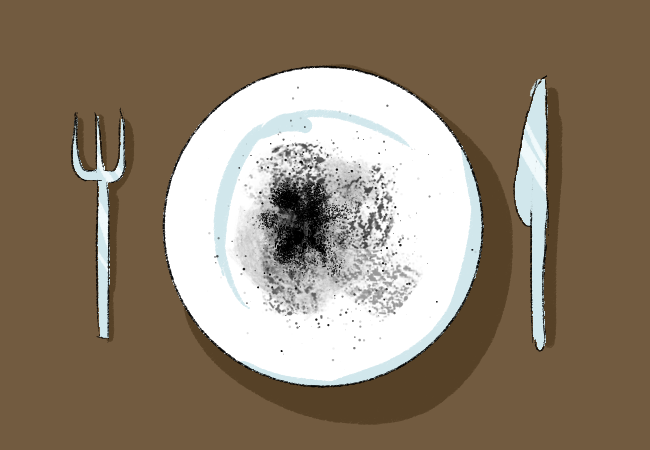 And if I really have to char the echidna to the point of it just being a sad pile of ash, I'm sure I could just use the ash to draw a cute picture of the customer. Can you make MCD out up there? That's his hat. 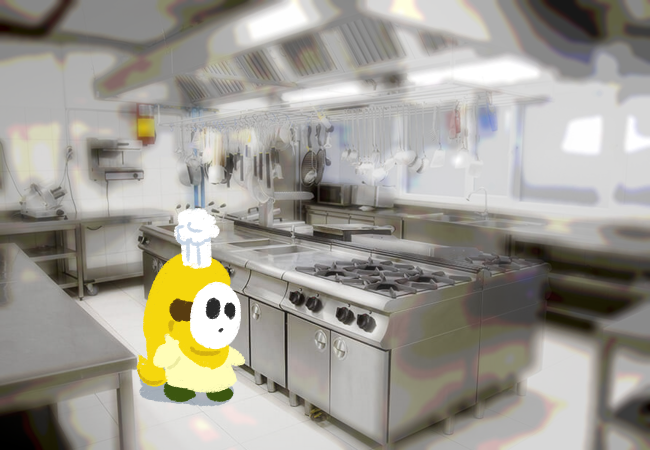 So, we're back in the kitchen. It's been too long, but some things never die- such as the need to do live cooking tutorials online! I'll show you how I'm actually gonna set this meal up now.

What you need is something super flammable. Coal does the trick. Then, using the flammable materials, start some kind of outrageous fire wherever you please. Oven, saucepan, staff room, as long as things are of a certain magnitude of temperature wherein one could describe the situation as 'lit'. Then all you need to do is throw in the echidna until it's cooked to taste! We'll deal with the needles later. 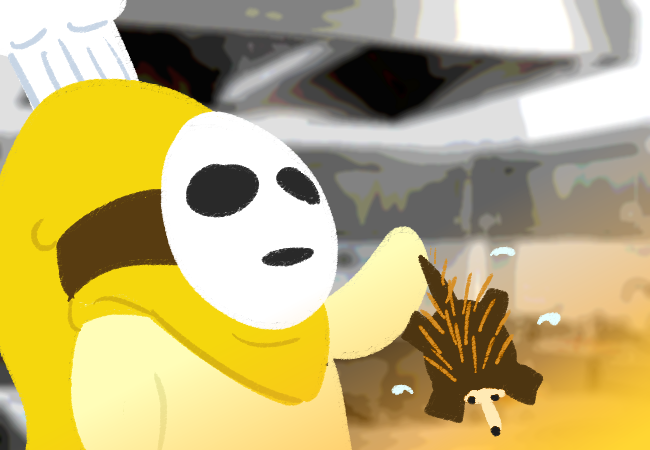 Anyway little buddy it's been real but I'm sure you understand that some things must be consumed for the purposes of art, and a proper climactic send-off. I know you've probably been a very good echidna and will go to echidna heaven where you won't have to worry about people confusing you with hedgehogs, or making fun of your species. So you really shouldn't feel too bad about this and neither should I. It's for the purposes of cooking after all. 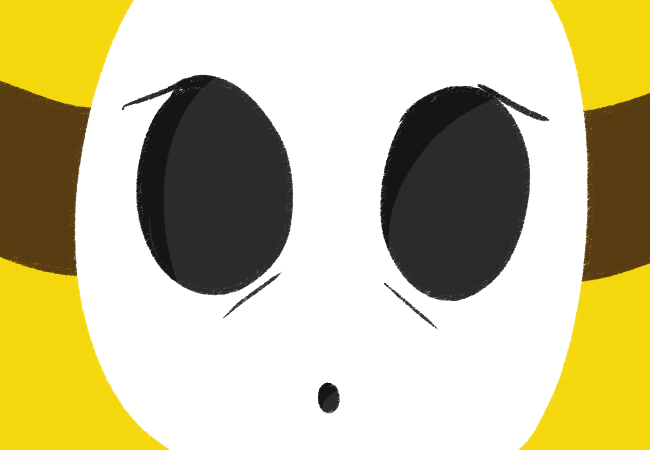 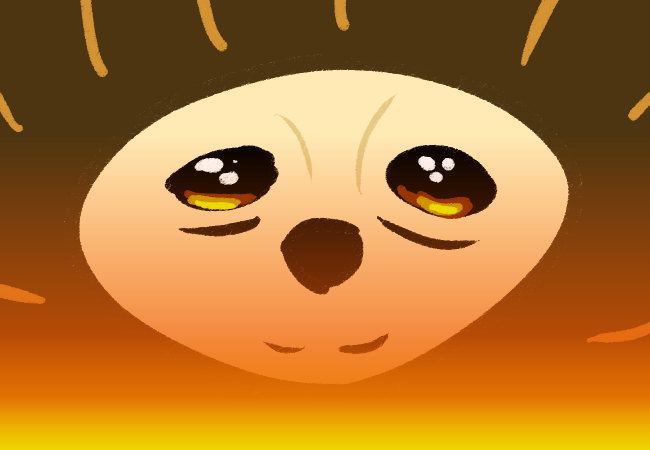 A little later in the evening... 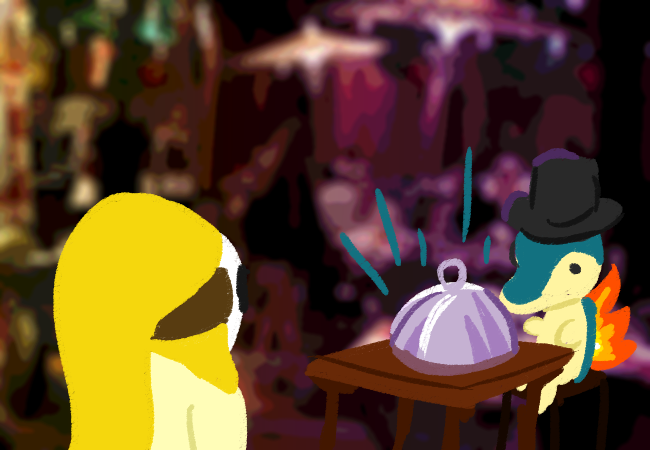 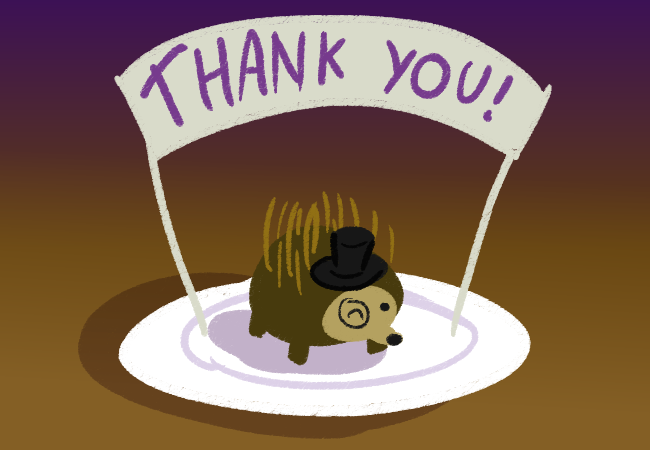 (Thank you for 100 issues of Fake News!) (No fictional echidnas were harmed in the production of this episode)​