From the Super Mario Wiki, the Mario encyclopedia
< The 'Shroom:Issue 152
Jump to navigationJump to search

Happy November, y'all! I'm not sure where it's gone, it's almost Thanksgiving and it feels like the month just started. Ah, well.

Right now as I'm typing this, I'm currently sitting on two fantastic RPGs. The first is Pokemon, which you probably already know about. I have Sword version, and I'm really looking forward to playing with all my new friends at work. Bloops and I have already started working together. Can't wait to punch Leon in the FACE. The second one I'm working on right now is Digimon! I picked up Digimon Story: Cyber Sleuth, and I really like it. It's very friendly to the uninitiated, and I say that as someone who knows next to nothing about Digimon. So many colorful characters with awesome music and mystery elements. If you like Pokemon or Persona, I recommend you give Cyber Sleuth a try for your Switch.

This month we're a bit short staffed, but you should still go check out Yoshi's section- I know he puts a lot of work into it. See you next month, when I'll have a more concrete review of Sword for you! ~FunkyK38

It wasn't much of a competition this month since we only had one section last month, but congratulations to Yoshi876 (talk) on his win for his What's on the Box? section looking at the boxart of Luigi's Mansion: Dark Moon. Thank you to everyone who voted, and please keep it up! 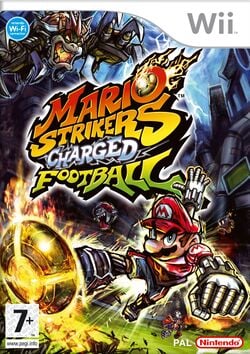 Anyone who really knows me, knows how terrible I am at most sports, especially ones like football and rugby. And the vast majority of that time, my lacks of sports skills translates into the sporting games like the FIFA series. However, one game that I seem to remember being relatively alright at was Mario Strikers Charged. This game was so much different from any sporting game I'd played before, whether it was because of the Mega Strikes, the great variety in the stadiums, or perhaps how headbutting another player halfway across the field was a completely legal move.

This game was a lot grittier than other Mario games that I'd played before, and this is reflected on the boxart that I grew up with, that art style is completely different than something like Mario Kart Wii or Super Mario Galaxy. I mean for one, Mario looks like he means business, as he strikes the ball, presumably as a shot on goal rather than a pass. Meanwhile, a ferocious looking Bowser is looking ready to strike, perhaps to knock Mario into the electric fence that surrounds The Vice, which is the featured stadium on the boxart.

And Mario has two of his sidekicks on the field with him, and it seems that he has a penchant for the undead as he's gone with a Boo and a Dry Bones. Boo looks ready for the action, and might be prepared to get his team a foul if he tackles an opposing player to protect Mario, while Dry Bones looks a bit more uncertain, perhaps he's noticed the Bob-omb that's headed his way.

Usually by now I've complained about some part of the boxart, generally that it doesn't have enough going for it, but this one really does. Honestly, it communicates how the style is much different than your traditional Mario sports game, and expertly shows off the football being played. My only improvement is really to have put some of Bowser's teammates somewhere on the field, whether it was a Toad, Koopa, Monty Mole, Birdo or Hammer Bro.