From the Super Mario Wiki, the Mario encyclopedia
< The 'Shroom:Issue 152
Jump to navigationJump to search

Hello and WELCOME BACK to FAKE NEWS! I'm MCD and I'll be your host. That's right, welcome to one WHOLE SUB-TEAM that's nothing but FILTHY LIES and MALICIOUS UNTRUTHS. What's that? You think you've seen news faker than this? - in that case it looks like YOU'RE the HORRIBLE LIAR because there is no such thing.

It's November and I was going to say we were "well in the swing of things" with autumn (or "fall" if you prefer) but then I realised it's like a month until winter and it's already really cold. Also, since Halloween is done, it's officially Christmas. I don't make the rules. If you're feeling particularly generous, you can gift us a special section for the December issue - or just apply for a regular section with us! Check out the sign-up page for more deets, plus a special introduction by my main man Waluigi. If you wanna write something but you're not sure what to write then we have a MASSIVE archive of issues - one every month for nearly 13 years(!) - so you can look through those for some inspiration.

Trouble has Broode... (brewed) (80% sure this one works???)
[read more]
Quizmelon tells us what to watch on the telly.
[read more]

The deceased with a pet

Hello 'Shroom readers! For those of you waiting for Yoshi876: Tubba Blubba's Inside Story, I'm afraid to sorely disappoint you, as I managed to escape from within him. I won't go too much into the details of how I managed to do so, as over the years I have cultivated Obituaries to only contain high-brow humour, despite numerous warnings from my editor that I should try and be respectful toward the dead. I honestly don't know why, it's not like they're actually around to read these things.

Those people who are currently planning their weddings will have to put them on hold, as one of the chief wedding planners in the all the Kingdoms, Madame Broode has died. Although workers at Marrymore insisted that they were able to continue the wedding plans, their resort was mysteriously destroyed by something apparently called the RoboBrood. Although workers ta Marrymore insisted this was something worth writing about, I reminded them that I was an obituary writer before putting the phone down on them.

I reached out to the Broodals for comments, but after finding out they were all cute, fluffy bunny wabbits, and completely disregarded what they said. Even when one attempted to whack me on the head with a spiked ball. Now that I think about, something like that might be dangerous for rabbits.

Madame Broode's pet Golden Chain Chomp was also unable to give me proper comments, as it all it did was bark and gnaw on my arm. Thankfully, I have perfected typing with my nose, so when the little tyke managed to chew off both of my arms I was still able to pen this obituary.

Madame Broode's cause of death was not told to me, although as she was present a lot in Cascade Kingdom, I have come up with some possibilities. She was eaten alive by Chain Chomps, drowned in the waterfall, stomped on and then devoured by the T-Rex, fell into the bottomless pits that surround the entire kingdom for some reason, was only partially converted into 8-bit and vice versa, or had turnips thrown at her by Captain Toad when he sailed around the place in his Minecart. Or the Odyssey landed on her when Mario was getting from kingdom to kingdom. I actually quite like that one, so that'll be the official cause of death, no matter what any mortician may say in the future.

Her funeral will be held in the Moon Kingdom and attendees are advised to bring their own breathing devices. Attendees are also reminded that due to the low amount of gravity at the Moon Kingdom, they shouldn't jump too high, or they risk floating off into space, perhaps never to be seen again.

It can be difficult to keep up with television in our universe nowadays. With so many streaming platforms and sub-channels, there are thousands of good shows to watch. Thankfully, the Mushroom Kingdom is still yet to obtain its own counterpart to Netflix, and the entire kingdom has fewer than 20 channels, half of which are awful. While some find the lack of choice severely restrictive, I’m fine with it, because it makes my job much, much easier. Let’s just go ahead with the top three Mushroom Kingdom shows of tomorrow!

Yoshi’s Island
MKBC2, 8.30pm
Genre: Soap
The hugely successful soap reaches a climactic point in its ‘Sundream Stone’ storyline when Blue Yoshi enters a state of moral panic and informs the other Yoshis about his exploits. Confusion and anger erupts among the Yoshis and fears grow that peace will never be able to be restored. (Don’t worry, it’ll all be over in a week or so, it always is.) 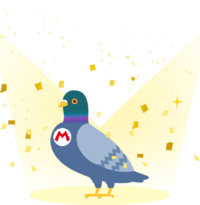 At 9pm on MKBC1 tomorrow: Yamamura the pigeon hosts his Live Extravaganza.

Yamamura’s Live Pigeon Extravaganza
MKBC1, 9pm
Genre: Variety show
Yamamura, the Mushroom Kingdom’s most famous pigeon, takes the stage to host this live night of pigeon-related visual spectacles. From a dramatic dance by a group of pigeon ballerinas, to a magic show where several pigeons appear out of thin air, to a stand-up comedy set by Waluigi in a pigeon costume, the show has something for everyone, and Yamamura’s engaging, personable presenting style makes it an accessible late-night show for all.

Chef Mario’s Restaurant Renovations
MKBC2, 9.30pm
Genre: Cooking/makeover show
Yet another food-themed show starring Chef Mario, Mushroom Kingdom’s most accomplished TV chef, Restaurant Renovations sees him travel around the world to find terrible restaurants and fix them up. In tomorrow’s episode, he visits The Bro Bar, run by a team of angry, frying-pan-hurling chefs who seem very resistant to his changes. It’ll be a tough challenge for Chef Mario to turn this place around.

As always, there’s a lot of other shows to watch, but as always, half of the channels are utterly awful, and I’m not exaggerating. Oh, by the way, next month was supposed to be the Christmas television special, but the TV producers have all scheduled month-long winter holidays, leaving Donkey Kong in charge of the TV channels, because there’s no way that could go wrong. Expect lots of DK next month. Until then, goodbye!