From the Super Mario Wiki, the Mario encyclopedia
< The 'Shroom:Issue 132
Jump to navigationJump to search

Welcome to the ides of March, everyone! I hope they haven't been too rough on you all.

Last month, I told you I would give you my thoughts on Bayonetta as it was recently re-released on the Switch! I've spent a few hours with both games and I can say with absolute certainty... that I am not very good at Bayonetta. I'm doing better in the first game than in the second, though maybe that's only because I haven't un-equipped my Immortal Marionette. Either way, if you love a good hack and slash, you really ought to try Bayonetta if you haven't already. It's a lot of fun. I've also been working through the New Game Plus mode of Xenoblade Chronicles 2, which has also been a lot of fun! The new blades they added have given me a lot of good options, the ones I do have, and it's refreshing to get some new voices in the party. Not that I've equipped anyone new onto Rex permanently, Roc's still all I need. As I'm typing this as well, I've had a few hours with Kirby: Star Allies, and I can definitely recommend it as a game you really should get on the Switch. I'm really hoping that it's not as short as I think it is. Cross your fingers and I'll be back next month to tell you all about it.

Our art team shines in this edition, so I hope you will check out everything we have to offer! ~FunkyK38

This month, Yoshi876 (talk) nabs a win for his section on the boring boxart of Dr. Mario 64. Congratulations! Thank you everyone for voting, and please do keep it up! Wario hanging with his minions.

First off; does anybody else think it’s weird that Wario used to have minions? Like Wario started off as a bad guy, but it’s hard to reconcile that greedy microgame company owner with the original Wario, who was a castle stealing villain. There’s a lot going on in this artwork; you’ve got an octopus looking at Wario’s crotch, a bird grooming Wario’s mustache, and finally Wario’s vampire pal bringing Wario his clothes (which look huge by the way) and pointing at a picture of Mario. It’s just good old-fashioned silly artwork and the kind that I love. I wish we had more artwork of bad guys just hanging out with their minions. Also, it’s a little obscured, but you can see Mario (wearing his new bunny ears) looking on at this scene, and I bet he’s just green with envy (also, remember when Mario had a castle and not just a tiny house? Whatever happened to that?)

But now let’s move on to the big man himself; Wario. Jesus, his face looks creepy. That big wide smile(?), angered eyebrows, and his somewhat bloodshot eyes with that intense stare as he looks at Mario’s picture... it’s a lot different than most of the early artwork of Wario, where he looks like a goofy fucker. However, I do like the image of him just chilling out and having his minions groom him, cause it offers something we don’t see in artwork much; a boss interacting with his minions. This is a really good piece of artwork, as it gives you a different perspective compared to most artwork of Wario at the time. Rather than being silly, Wario comes off as menacing and you can really see his hatred of Mario when he sees that picture of him. It’s a nice little piece of artwork that shows you that Wario is a villain, and not just some greedy harmless goofball. 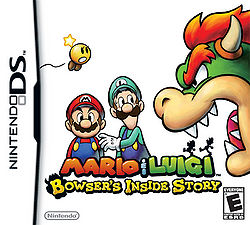 We seem to be going on a bit of a trend with boring boxarts here, but this one is a considerable shame, considering how amazing the boxart for Mario & Luigi: Partners in Time is, and considering how the great the series is as a whole.

All there is on the boxart, which has sadly become the staple style for all future Mario & Luigi games is Mario & Luigi looking terrified, Mario directly staring at you while Luigi is looking Bowser, and then on one side is Starlow floating over, and on the other is Bowser about to swallow two silhouettes of the brothers. And that's it, unless you count the white background as something interesting, but given how none of the general connotations of the colour white fit in here, I don't.

But like I said at the start of this section, this is a massive shame, and I would have much preferred it, if the game followed previous Mario & Luigi boxarts. We could have had characters like Midbus, Fawful or Dr. Toadley make an appearance, the Blorbs could have been referenced in some way, or the boxart could have Bowser in the background sucking up Mario & Luigi, and maybe a few other Toads, like what happens in the game. If I brought games solely on boxarts, then I would not buy this game, because it looks so boring.