From the Super Mario Wiki, the Mario encyclopedia
< The 'Shroom:Issue 112
Jump to navigationJump to search

Hello, everyone, welcome to another exciting edition of the Fake News. I am your equally exciting director MCD. Here are my tips on how to have fun this summer:

It's always a riot when I'm around. A figurative riot. Not an actual riot. That would be terrible.

The least threatening colonel ever. And I mean ever.

So, Colonel Pluck died. Yeah, that happened. Bit silly of him to die seeing as all over the Mushroom Kingdom and DK Island, there's complete peace right now. Even Bowser is sunbathing with some of the Royal Guard.

So, he didn't die fighting heroically in a war, although according to top DK generals he wouldn't have done so anyway. Apparently, he was only appointed "so we could shut him up, why else would he station him as far away as possible from us?" How did he die I hear you asking, well I will tell you. His robot slipped on a banana peel and he crushed inside it. He couldn't have had a less dignified death if he asked for it. The DK generals agreed with me "If he'd wanted to die, we would've given that to him, that's for sure," I heard them murmur.

Colonel Pluck's military career was far from ordinary, at best he got food ready for the divisions in more important areas than his, like everywhere else. Friends of his said they were sad to see his military career shut down so quick, but they all agreed that he was a better banana picker than a colonel. Though he wasn't that good a banana stomper as it turns out.

Was anyone sad to see him go? Well, the Kremling Krew were, their leader King K. Rool said "Now that he's gone we'll have to put our invasion off for another few games, no doubt someone who can actually perform well will be stationed there. Oh well." I tried contacting the Tiki Tak Tribe for comment, but apparently they were all off at a concert or something.

Colonel Pluck will not be receiving a military funeral, mainly due to him barely having a role within the actual military, however, his remains can be found in various places. And if you get them with the Bonus Bucket it's only like $9.00.


I guess the above banner means that it is time for this section again, which is why I am writing it right now. Without further ado, let's get on with the show!

And now for a new thing that has been relayed to our editorial team. A Retro Feature that the Pipe Plaza has apparently rejected because it was too realistic!

What an incredible find! I haven't read it yet either so let's get right to it:

Okay I think that's enough... I know whose arse I'm gon- Anyways, the show's over for today, everyone go home or go to another section, and come back next time because this wasn't the last thing you heard from me.

Hello, it's me again. Quizmelon. Yes, I'm still here, and welcome to TV Tomorrow! The section that tells you what's on the box in the Mushroom Kingdom, provided you can stop playing Mario Kart long enough to actually watch something. Like last month, I have all the channels covered, and here are the top three shows that you can watch tomorrow. 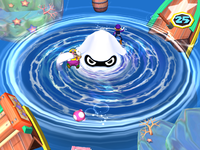 
MKBC2, 8pm
Genre: Action-adventure drama
Part 2/5 of this series about four adventurers whose ship gets wrecked after being attacked by a wild Blooper. Wario, Waluigi, Toad and Toadette's ship is suddenly destroyed in this episode, leaving them stranded on an island, a setting they do not easily adjust to. This thrilling programme can delight any viewer, no matter what they are looking for. 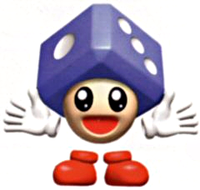 Tumble, hosting the show of his namesake on the Party Channel, tomorrow at 7.30pm.
New: Tumble Show


Party Channel, 7.30pm
Genre: Talk show
Do you like complete madness, provoking and confusing discussions, and a whole load of fun? Check out the Tumble Show, a brand new talk show hosted by the one and only Tumble, host of Mario Party Advance! Today he invites Luigi, MC Ballyhoo, and Pom Pom to the studio, and the show soon erupts into mayhem. Look out for some of Tumble's catchphrases and make sure to have as much fun as possible! I promise you... this show will keep you laughing for hours.


MKBC Kids, 3pm
Genre: Children's
A brand new episode of the now famous kids' show, starring Rosalina. This episode sees the heroine try to find some food for her Hungry Luma, which proves to be more difficult than first appears. Great fun for kids aged between 3-6 - the first two series were great and this new series seems to be keeping up the standards. I'm looking forward to seeing more of Rosalina's adventures in the future.

There are many great shows (and many poor ones) on tomorrow, but this is all I have room for right now. Sigh. I might expand in future. You never know. But that is it from TV Tomorrow for today. Remember the television has more use than just to play Wii games on - you could catch all these great shows on in the Mushroom Kingdom. Look out for the section next month, but for now, it is goodbye from me!


Hey, everyone, and welcome to Travel Guide! I'm your host, SpearGuy729, and- hold on a sec. My manager's screaming at me for something.

Oh. Uh... yeah. Last month, I didn't make a tribute to Walkazo. Accidentally. Because I knew that the issue would be a tribute to her, but I didn't really know what that would mean for my section, so I just sent it in normally. Whoops. But, uh, penguins are birds right? Do I get some points for that?

Now, this edition of Travel Guide will be themed for her, I guess. So, although I didn't know her, I (like most people) know that she liked birds, so let's explore Wingo's Watchtower from Captain Toad: Treasure Tracker. This is a location with one pretty big bird: Wingo. She'll huff and puff and use her wings to blow you away! Stay close to walls to not be knocked off to the lower levels and not be distracted, and you should be good. I think. I haven't played this game in a year and a half, so I don't really remember how you do it.

Is the Wingo in this picture even real, or just photoshopped on there? Look at her edges!
Once you get to the top, you find some gold. Cool! Shiny! But then Wingo comes along and starts doing the wind thing again. Throw some turnips at her like back in Super Mario Bros. 2 and ride away in a minecart with Toadette as the credits roll by.

But speaking of Toadette, if Wingo's wings blow you away, why not Toadette? She's literally hanging on to Wingo's necklace, and somehow she holds on that whole time. But overall, this would be a pretty crappy vacation spot. There's constantly a giant bird trying to kill you, and then once you think you're finally rich, it kills you again. And if you manage to pull a SMB2 and kill her, then you just ride away, regretting your past and not even taking any gold with you. I hate this place.

*throws game out of window*

HEY! WHO THREW THAT?

THIS CAPTAIN TOAD: TREASURE TRACKER BOX JUST HIT ME IN THE FACE! WHICH ONE OF YOU DUMB 'SHROOM WRITERS DID THIS?! OR WAS IT ONE OF YOU 'SUB DIRECTORS'?

He's the director of the 'Shroom. And you say RandomYoshi is? No, it's this crazy guy. He kidnapped RandomYoshi last week and... here he comes.

Uh... no, sir. I'm sorry about that. Whoever threw the box at you must be an excessively troubled fellow. I would never do such a thing.

THEN WHO DID IT? 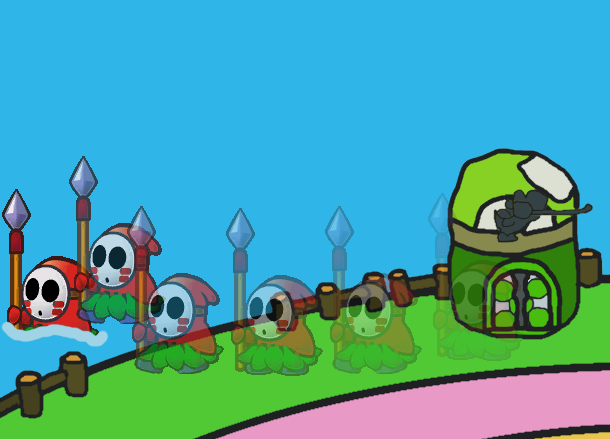 And so SpearGuy dashed out of his house and into the ocean... out into the great unknown. 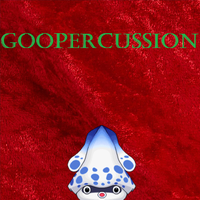 Bloopercussion
Hello there! It's once again time to dive into another lush audio experiment with your dear friend and artistic thinkpoliceman Banjo as your guide.

Gooper Blooper has long been revered in music circles for his constant collaboration as the drummer with jazz-fusion outfit Paper Scissors, fronted by band-leader General Guy. His solo debut, as can be gleaned from the title Bloopercussion, is a piece heavily driven by drums. Let's look at that tracklisting:

As you would expect, amazing displays of drumming techique play a central part in this jam-riddled LP. It's not wholly instrumental though; he is joined with vocal accompaniment by longtime friend Il Piantissimo and there is sparse instrumentation by Scissors bandmate and multi-instrumentalist Rip Cheato. Altogether it makes for a very tense and frantic atmosphere that's enjoyable to immerse yourself in. Il Piantissimo's vocal stylings can be a little overwrought, but hey, it's the soul that counts.

This album is available for purchase on Delfino Records at no major retailers.