Is there any proof on the Whomp King's appearance in SMG2? Fawfulfury65

Now that I've seen the video, the "whomp king" in SMG2 looks like a normal giant whomp to me!So I bellive there is no proofs.

Hmm... the Whomp Fortress level reappears in SMG2, so maybe that is him. I guess we'll just have to wait until Sunday... Fawfulfury65

Here is the video. I am pretty sure he is da King --

It is him.Same speech and someone put that in the article.Asaokaj

Does anyone know the name of Whomp King's miniature Whomp underlings or if they've been mentioned in the Galaxy 2 guide? -FourPaperHeroes 17:04, 26 May 2010 (EDT) 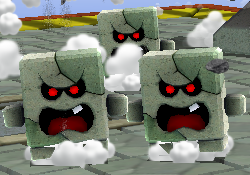 I'm not sure if any official name exists, but I think "Whimp" is a pretty clever conjectural name. My vote's on going with that if no official name shows up. Teamrocketspy621 16:27, 27 May 2010 (EDT)

I looked at Whimps and someone put a SMG2 section.Asaokaj

I think the quote is too long here. I looked in the history for the Rosalina article, and the quote was as long as the Whomp King's. It was considered too long in the discussion. That said, I think the Whomp King's quote should be "It makes me so mad!" Or "We build your houses, your castles, your- Aaargh! I'm tired of this speech!" -Shroom64: The Mushroomeditor

I think "I think I'll crush you just for fun! Do you have a problem with that?" would be more fitting. It shows off his personality in two sentences. GreenDisaster 09:25, 18 June 2012 (EDT)

OK, I'll just erase the rest of the quote. -Shroom64: The Mushroomeditor

Old convo, but it's rather incomplete since the quote is still long. So just to clarify, I think the quote should remain long, since it's kind of become his signature, I think. He said in Super Mario 64 and Super Mario Galaxy 2, all of it. If it was only in 64, it could be shortened, but it was quoted exactly in Galaxy 2. It just feels like it should stay long.