No, he isn't. He is not original to SSBB. He's from a game called Taboo: The Sixth Sense.

Yeah, I saw a video of it on Youtbe and there isn't any character whatsoever, it's just a (really weird) tarot card game. -Blitzwing (talk · gnome work)

He should be moved somewhere else on the other series character templates. -- Sir Grodus 17:14, 9 February 2008 (EST)

He is most probably not an other-series character. When you search for "Tabuu" on Wikipedia, it automatically goes to the SSBB article. This means Tabuu either doesn't exist in any other game, or is from a really obscure game. However, the latter seems much less likely. Mumbles 19:25, 16 May 2008 (EDT)

Something's wrong about his attacks...I dunno exactly, but at least SOMETHING is wrong here. GrodenE T C El

Well, that doesn't help. You need to be more specific.-Darknessofheart

That video explains who is tabuu http://br.youtube.com/watch?v=kCIxBAJKK8w

K, I just got on here because I was playing Brawl, and something REALLY weird happened. I was fighting Tabuu, and I was Peach, and he did his Chain of Light attack on me. However, I wasn't launched. Instead, he sorta did it again, only he didn't swing, he just held on to me, and Peach just was floating and doing nothing. I couldn't control her. She was floating with her arms out, and when Tabuu teleported, she did it with him, in the same floating-arms-out pose. Peach was just floating under Tabuu, following him, and he did off waves, Peach even went into the backround with him, then Peach died. I have no idea what happened, so can someone please tell me what happened? Is it a glitch? :|

If the attack was meant to simply immobilize the opponent sometimes, Tabuu would probably have used the opportunity to attack (like normal characters when they grab opponents); instead of teleporting and going into the background (which also smells like a glitch to me). How she jsut dies seems wrong too, so yeah, it's probably a glitch. - Walkazo 17:20, 27 August 2008 (EDT)

Well not really just dies, she flies offscreen from the Off Waves. And she just floated under him, no matter what happened. Actually, he teleported a bit, then did the "Shoop Da Whoop" attack with the bird thing, and Peach was unharmed due to floating under Tabuu. :|

By the way, I got a picture of the glitch. 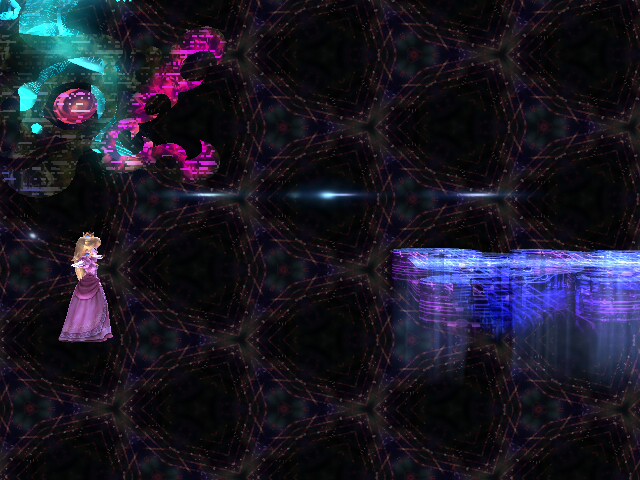 Will anyone comment? I need more people to tell me stuff!

I don't have Brawl, but that is defintly a glitch. There is also a glitch with Kirby's Fianal Smash, I saw it on YouTube.(Oh, did you ever stumble upon any other glitches.) -Nerdy Guy

I have brawl, that's definately a glitch. I just faught with Peach in SSE and when he used his Chain of Light, that didn't happen. Although, I suck with Peaach so she died XP Super-Yoshi

XD it would be helpful if someone who WAS good with Peach tried it. SOMEONE OTHER THAN ME!!!

That pose is indicative of a malfunction in the game's programming code. It's usually seen when modders swap characters' movesets. If the movesets are too incompatible, the game defaults to an upright, arms-extended pose. (i.e. Capt. Falcon and Ganondorf's movesets are relatively compatible. Capt. Falcon and Pikachu's movesets are not, as there is too much difference in movement and execution). Just thought I'd clear up the reason behind that. Phoenix Rider

Has anyone noticed that Tabuu looks a LOT like Tron from the movies of the same name. They are both blue humanoid creatures, so can we put it in Trivia? I didn't put it in because no one else noticed so I'm just wondering if its just me. MisterJaffffey

Y'know how some characters/enimies have a foreign name? Does Tabbu have any?

While I know we strive for long articles, would it be wrong to say that Tabuu is too long? I mean, just look at all those blocks of text! Hello, I'm Time Turner.

Tabuu is too long for the article. Most of the information describes what happened at the Subspace Emissary. I think what counts is the content of the text, not the length.