This is not a forum for discussions about Pixl. Please ensure all comments are related to improving this article because questions such as "Who is your favorite character/team/area in this game?" are not allowed and will be removed on sight. Please use the Mario Boards or our Discord to talk about Pixl.

What about Tippy? Max2 (talk)

Piccolo, dashell, and tiptron are in the game, but the need to be unlocked in side quests {or bought in tiptron's case] mach_nine

Is the image working for you?[edit]

Because it's not for me. If it's not, then someone should probably delete it.
The preceding unsigned comment was added by Bentendo (talk).

Wikipedia says that there Pixls called Piccolo, Dashell and TipTron (Tippy's replacement, a robot). I'm not sure if they are the work of a contributor or a vandal. Especially, the last one Plumber

They all are real, but optional. Barry is also optional. He is the Pixl behind the bush that tells you how to get to Fort Francis. If you talk to him after rescuing Tippi, he joins your team. To get Dashell, you must beat Wracktail at the bottom of the Flipside Pit of 100 Trials. To get Piccolo is a long sidequest which is too long to list (and it has been so long since I did it I don't remember everything...) and to get Tiptron, you have to beat the game. Tippi gets married to Count Bleck to stop the Chaos Heart and she and Bleck die. If you have the maximum amount of coins you can have in the game (999) and then talk to Francis in Fort Francis, he'll give you Tiptron for all of your coins. Tiptron thinks he is Tippi yet also knows he isn't. It's odd.{{User:M&L'M&L Baby_mario.gif 19:15, 8 January 2012 (EST)'}}

What is the order that they're rescued in?--

Well, first is Tippi, then Thoruea, then Boomer, then Slim, then Thudley, then Carrie, then Fleep, then Cudge and then Dottie. At any point after you have access to Flopside you can do the Piccolo side quest. Once you have Luigi (giving you access to the Flipside Pit of 100 Trials) you can fight Wracktail and rescue Dashell. Once you get Tippi back after Chapter 3, you can talk to the Pixl behind the bush (Barry) and he joins you. And after you complete the game, and have 999 coins, you can buy Tiptron from Francis (as Tippi can not be used upon beating the game).{{User:M&L'M&L Baby_mario.gif 19:20, 8 January 2012 (EST)'}}

Is this just written or a "blooper reel"?--

All right, then, about the image[edit]

true its messy, and its not offical. Great Gonzo 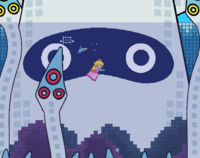 What's that Pixl with Peach? Shouldn't it be added to this section as a 'beta' pixl or something? (and according to someone on the discussion, it was named 'Laddy'; perhaps it was an early design for Thudley?).
The preceding unsigned comment was added by Neobinary (talk).

It is mentioned in Beta Elements already. It can be put in the Trivia section. - Cobold

I said it was probably named Laddy. I only got a glance at the screen, and It was sorta blurry. Max2 (talk)

IT WAS SPELT 'LADDIE' NOT 'LADDY'! From Sap
The preceding unsigned comment was added by Sap (talk).

If you go into Flipside, and speak to an explorer who lives in the counterpart of the house that holds Piccolo, he'll tell you that he went searching for a legendary Pixl. He then tells that a rockslide occured, and chose to save his partner over the Pixl. Therefore, Mario does not have all 12 of the original Pixls (Tippi does not count as an original Pixl since Merlon transformed Timpani into a Pixl) because one of them died. Shouldn't this be mentioned in the article?
The preceding unsigned comment was added by Neobinary (talk).

Actually, all of the Pixls are actually spirits inside Pixl containment units.--

Hey, the "dead" pixl could have been cudge, because there is a small mountain, then a long vertical collumn of blocks, then parts of a mountain in the middle of nowhere. There could have once been a mountain where the blocks were, and it collapsed in the rockslide. The guy says he chose his partners life over the pixl, not over the pixls life. --YourBuddyBill 14:54, 26 November 2008 (EST)

I've played through the game and have never even HEARD of any of this Pixl Queen's Uprising stuff. Someone tell me where they found it.
The preceding unsigned comment was added by Lord Blumiere (talk).

I think the story was told by either Garson (Flipside bar) or Carson (Flopside bar). If you haven't talked to either of them, they're bartenders in Floor B1 of their respective towns. You have to pay them 10 coins for each of their stories until they start repeating them for free. I think one of them tells the story you desire. — NES Boy 01:01, 9 May 2007 (EDT)

In the game, an explorer mentions that he found a legendary Pixl, but he didn't save it in a landslide. Does this mean that Pixls don't have an infinite lifespan? If so, I think it should be mentioned in this article. Or, perhaps, this other undiscovered Pixl didn't die? -Im4Viv

Have you heard about any unseen pixls?
The preceding unsigned comment was added by Joseph (talk).

Mabey you can add more info to the section? From Sap
The preceding unsigned comment was added by Sap (talk).

That ladder pixl is called Laddie! can you put some info on it? Sap
The preceding unsigned comment was added by sap (talk).

I always thought the Pixl that Heronicus mentioned was Piccolo. BTW, Cudge is my favorite because I like to use the hammer! 296lmn20

I found out the Lader Pixl's name. (the one that was removed). Apparently his name is Laddie and in early 2007 he was replaced by Thoreau. Shouldn't we add information on the name and replacement in this article? The RPG Gamer (talk) (edits)

We can't do a thing until you provide a source.

Yes, please add an official source. And something different than this.

The only reliable source I have is the one on Paper Mario Wikia unfortunately so I don't think it's justified to add until we have more information. I will try and look into it further, until then. The RPG Gamer (talk) (edits)