Today I came across what I think is a rare and strange glitch. You see, today, I was playing 2 player with my brother. My team captain was Waluigi and he was Yoshi. I was Waluigi and I was pitching to Birdo, who had 5 team stars. We were in Bowser's Castle. Anyway, Birdo did a star hit, and she immediately hit a charged shot (not a Weird Egg) that knocked the ball out of the park. I immediately knew something was wrong. Suddenly, random spots of the screen were blurred out by this white light. I thought my disk was scratched or something, but when I looked it over later, it was spotless. So, anyway, right when "HOME RUN" appeared on the screen, it turned completely black. I couldn't see anything except for what looked like a giant bird's wing flapping on the right side of my TV screen, and I could hear a bird flapping its wings. The game played normally after that. But that instant home run shot cost my little brother all of his team stars, instead of two.

It just happened again. Only this time, no bird. Maybe there's something wrong with my memory card.

Nevermind about the bird. The "flapping" was actually Podoboos in Bowser's castle jumping out of the lava. As for the wing, I'm pretty sure that was just random pixels on the screen going dead for a second. At any rate, the instant home run was still pretty weird.

I SAW THE GLITCH! IT IS TOTALLY TRUE! User: Maxlover2

Guess what. The bird wing was probably just a temporary problem that can occur even when the disk is clean (problems have occured on some of my games, even though it is clean). That part of the "Glitch" is cleared up. The Podoboo's are most likely the cause of the flapping sound. That's another cleared up situation. The instant homer, that is not a glitch, it is a secret trick. My brother was once playing the game, and he hit the ball with percise timing. He lost all of his Star Power, but got an instant homer. Basically, if you have 5 Star Power Points, and you get precise timing, and I mean REALLY good timing, then you will score an instant Homer. It is not a glitch, it is a secret that can either help you win the game, or cause you to use the wrong move. (e.g. you accidentally use Mario's Fireball, not the instant homer). My Bloody Valentine

Where do you find the character bios?--

They're in the game somehow unlockable.

Get Superstar for all of your characters and beat special mode.Knife (talk)

No. to get the bios, that player needs to be an MVP in Exhibition.
The preceding unsigned comment was added by Maxlover2 (talk).

Maxlover is correct. You must win the MVP in Exhibition Mode as a certain character in order to earn that Characters Bios. My brother has got all of the Bios, but he hated doing so. It is very difficult to get the correct one your after. My Bloody Valentine

Looking at the Toad bio I couldnt help but notice that it says HE. Not to mention that Toadette is playable... are we SURE that is not THE Toad. After all, Toad's may be able to take off and change there mushroom caps... - Ultimatetoad

How 'bout this. WHO CARES!! It's just a game, the point is to play it, not to start controversy. My Bloody Valentine

Can somehow explain on the page how the game is actually played, like on Super Mario Strikers? It might be worth noting what are the main differences between regular baseball. And it might also be quite interesting for me considering I don't know the rules of Baseball at all. - Cobold (talk · contribs) 16:46, 14 January 2008 (EST)

Can we turn the Characters section into something that looks like the sequel's Characters' page? You know, with Team Names, Stats, etc. Superjustin 17:21, 16 August 2008 (EDT)

I agree with him, we should do that!

Instead of the regular images, can we do the heads as seen in the bottom left corner of this screen. I have a lot saved and i can upload them. Because the Team Players Don't have images.

That's why you separate captains, and then just don't put an images section for players. :| FD09

I Really think that we should be puting Images of the characters because right now everything is so crowded I mean Right under the captains section is the team players but in exhibiton captains can be team players. So I think lets do what we did with the Super Sluggers article have images it would also help new commers to the series. Mario freak (talk)

Where? Like in Super Sluggers? How would we get the pictures of the characters? Any suggestions? Like in the Character Select screen?

It has been done.

It's fine so far; but should we have an addition section noting the "alternate" Team Players? That's what we did on the Mario Super Sluggers article; the difference is that the "Bio" section would have to be taken out, since it's displaying the same details. --M. C. - "Mario Gals" Fan! User Page | Talk Page 01:42, 18 July 2010 (UTC)

Well, that is what I was thinking about. I'm not particularly fond of repeating information. Ok, I'll change it.

I made a contribution to this article and now I don't see it anymore. Did someone delete it? Is it unnecessary or what? Beecanoe (talk)

I played this with my sister discovered that some characters cling onto walls, cry out, and fall slowly back as if they were stunned. Not all characters do that (the ones with wall jump don't). Does have anything to do with wall-jumping, or an attempt to wall-jumping or even clamber? What's this all about anyway?

Here's a list of characters I know so far do it: King Boo, Petey Piranha, Monty Mole, Hammer Bro., Bowser, Pianta, and Wario.

The picture for Yoshi seems to be really fuzzy. Can someone make it like the others? ~ Qyzxf (talk) 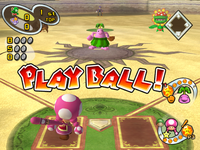 Is it me or does this picture look really odd? I mean those black squares around Lakitu's cloud, those meters and stuff? Is this a real screenshot? It looks strange.~ Qyzxf (talk)

"Another (optional) quest in Challenge Mode is the Superstar Challenge. Each character has certain goals that they must clear. Clearing the goals earns the character stars. Earning every star makes that character a Superstar and boosts all of their abilities."

This implies that the characters in question become more powerful within Challenge Mode itself, and the higher levels become easier. However, people on another site stated that characters could only receive Superstar boosts in Exhibition mode. Can this be clarified? Corlagon (talk) 20:40, 12 December 2013 (EST)

No, I can use star characters in Toy Field and minigame mode as well. The only mode you can't use starred characters is challenge mode, unless you star them within challenge mode itself (which is required to get a star for the character anyhow).

I know this sounds like a stupid question but what makes good and bad fielding and pitching. From what i read bad fielders always fumble the ball but they always catch it 90% of the time, and bad pitchers have slower balls but they have fast throwing speed most of the time. Maybe could someone define it more clearer, i don't see what makes good or bad in both. Thank you. .Mariobirdofan02

Hello, I notice even if Red, Orange, Yellow and Light Blue Birdos appears in the Introduction, they are not in the audience. I got 2 questions about that. Does anyone got a prove they really appear in the Audience? Does anyone notice somethings about Birdos in the Data as a unused contents? Ouimet (talk) 10:24, 12 April 2020 (HNP)