Is it worth mentioning that the firebar is an item on Animal Crossing Wild World? If so, it should be noted that it plays the Bowser Castle Music from Super Mario Bros. 1, and the flame spins in a circle.
The preceding unsigned comment was added by Anthony007 (talk).

Yes. That can be mentioned in a trivia section. -- Son of Suns

The trivia-section states that Fire Bars appeared in Zelda: Phantom Hourglas. There are objects however, similar to the Fire Bars in A Link to the Past (A Zelda that was released much earlier than PH) as well. I checked it and found this Video on Youtube: http://www.youtube.com/watch?v=cLcu_M9In-A&feature=related Look at 6:00. Could this be concisered as a Fire bar?

Ok, then I will just replace "Phantom Hourglass" with "A Link to the Past", since the basic behaviour of the Fire Bar remains the same.

Some pages in Mariowiki and the SMW template says firebars appear in the game but where exactly? It might be an error that must be corrected.--Platform 19:11, 16 July 2010 (UTC)

Here is a list of locations for the fire bar in games mentioned in the article.

seeing as I don't have most of these games, I can't tell you from experience. But I hope that my research pays off to who ever can use it.
GG445 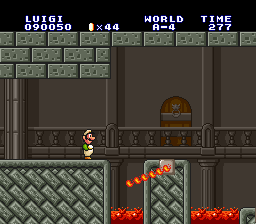 What game is this image from? it looks really familiar...

It's A-Me, Krizzy!! Me, my chatroom, my contributions, etc .