my name is lucas< please have fun on my cool page!if you have any questions about princess daisy i will be glad to help you(or tiny kong!!)i love daisy and tiny kong!!!!!!!!!^_^!!! I will edit pages of daisy,tiny,boos,flower people,etc. Princess Daisy (Japanese: Deiji-Hime) is the princess of Sarasa Land, who first appeared in the game Super Mario Land. Daisy's current place of residence is in the Mushroom Kingdom, although she still travels to and from Sarasa Land; via her cruiser. Daisy is known to be a tomboy, and her special abilities often deal with flowers. She shares a friendly rivalry with Princess Peach, and is known to be in relationships with characters like Luigi, Mario, and more.

Years after the release of Super Mario Land Daisy started appearing in more and more Mario games; this was due to the lack of human characters in the series. She now appears in the majority of Mario games; most regularly as a playable character. She was created by Gunpei Yokoi, Shigeru Miyamoto's mentor. Yokoi passed away eight years after her debut appearance, and three years before she appeared as a major character in another Mario game. It is possible that Daisy's re-debut into the Mario series was part of a tribute to his passing. Daisy has appeared in over thirty games, and has continued to for almost eight years straight and running.When it comes down to it, Daisy can be defined best as a tomboy. It has been said that Daisy is always full of energy, and it's evident due to her cheerful nature. Her team name when partnered with Boo in Mario Party 8 happens to be "High Spirited Duo"; obviously basing it off the fact Boo is a spirit and that Daisy is full of spirit. In each of the game's she appears in she is widely acknowledged as a tomboy or "less feminine" than her royal pal, Princess Peach. As such, Daisy is not "dainty" or "fragile" compared to what one might think from her appearance. She also has a huge competitive drive, though it's apparent she knows it's all in good fun. Daisy can tend to speak in a more common contemporary vernacular than other characters; the prime example of this being her ways of speaking in a slang tone of voice. 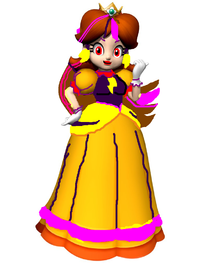 In Mario Tennis for the Nintendo 64, she was depicted as being a bit clumsy. This was shown in her tournament victory cut-scene where she starts thanking everyone, and suddenly trips off the stage with her trophy. Additionally, in Mario Party 3, Daisy revealed her seductive side by showing off her good looks, and flirting with the Millennium Star to get a free badge. Simply by doing a twirl the Millennium Star basically fell in love with her, and was willing to give the beuty badge to her right away. In more recent games Daisy's personality is much more defined. In Mario Strikers Charged, her general attitude takes her tomboy personality to a new high. In Mario Kart Wii, Daisy is said to leave any friendships she has at the starting line; this is obvious as in the middle of racing Daisy tends to mock other players. Daisy can be summarized as an energetic, friendly, and fun loving girl who can, so to speak, "hang with the guys."

Tiny Kong is Dixie Kong’s younger sister and as such is the cousin of Kiddy Kong and Chunky Kong. She is one of the five playable characters in Donkey Kong 64. She is very nimble and is the fastest of the characters in DK 64. In this game Tiny is one of the many Kongs imprisoned by the Kremling Krew at the start of the game. She is found in the area Angry Aztec. Once Tiny is released, she can collect purple Bananas, coins and Blueprints.