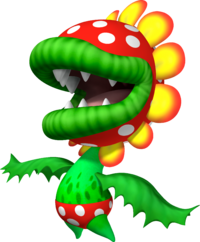 Welcome back, everyone, to my 7th character comparison! I will be using Galactic Petey's idea this time, a comparison between two enemy kings! Both are in a spin-off game, a 3D game and DS handheld games but what's so different about them? Let's see!

Petey looks almost like a Piranha Plant, except he has flower petals on his head, he has legs, he has arms, and he's giant!

King Boo looks almost like a regular boo, except he has a crown.

Petey appeared in many 3D and spin-off games. His first appearance was in Super Mario Sunshine for the GameCube. Bowser Jr. assigned him to guard Bianico Hills. Mariofought bravely and defeated Petey twice. His appeared again in New Super Mario Bros. as the fifth boss. After this, he appeared in almost every spin-off such as the Mario Golf series, the Mario Kart series and the Baseball series. After the spin-offs, he appeared in Super Princess Peach as a boss.

King Boo can teleport, blow Luigi into the foyer, materialize things out of thin air, fly and blow fire!

Petey is huge, but not very smart. He loves sleeping but will come running at Mario if he is waken up. His goal is to kill Mario and will stop at nothing to achieve it. He also loves food.

King Boo is really intelligent and powerful. He is also very confident, such as at winning or at defeating Mario. He also likes taunting at this enemies.

Well this is the end of this comparison. So who is more popular, Petey Piranha or King Boo? Click "Show" to find out!

PETEY PIRANHA- I have seen a lot of Petey lovers on this wiki and the world. Anyway, the reason why he won is because he's funny, strong and appears in more games then King Boo! Well that's the end of my November comparison. I'll see you in December!