From the Super Mario Wiki, the Mario encyclopedia
< The 'Shroom:Issue XXVI
Jump to navigationJump to search

It's time again for Beta Elements! This month we'll take a look at:
Mario & Luigi: Partners in Time 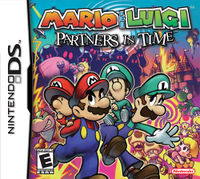 This game has some pretty "off-beat" beta elements:

1. A screenshot has shown Mario, Luigi, and the babies battling two red-shoed Bloopers in the Vim Factory. 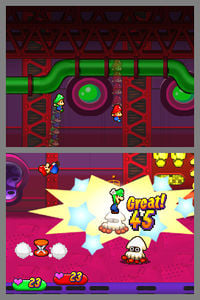 2. Another screen shot shows the Bros. battling a set of Boo Guys in Hollijolli Village. The enemies were not found in the same area during the final product. The Mix Flower seen in the shot looks extremely different from the final version, and appears to work differently, too. 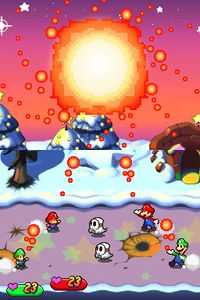 3. Baby Mario's artwork had shown him wearing miscolored red shoes, instead of his normal blue pair. However, the game itself has not shown the change in shoe color.

And now to shed light on these elements:

1. Bloopers with shoes, eh? What a unique enemy that would be. Well, I can only think of one reason Nintendo got rid of the little squids; they didn't fit. First of all, they were located in the Vim Factory, with no water, and a depressing atmosphere. That, to me, seems like no place for even a land-bound Blooper. However, it would be nice to see these odd critters in action, even if just for a moment.

2. I can't say I know why these enemies were removed from the village. I mean, they fit almost perfectly into the setting; a destroyed village, being patrolled by the underlings of the Shroob forces. However, the reason for removal may be the very fact that the town needed to seem completely abandonned, and with random Boo Guys floating around, that feel would be lost.

3. Now this element was probably no more than a simple mistake. Nothing more, nothing less. But even so, the red shoes would've just ruined Baby Mario. The blue shoes looked perfectly fine, so really, any other change would be unnecessary. But Nintendo has messed up shoes once before.

Wow, I finished this in record time! Sorry for not having my section in for the last issue. My computer actually broke at the worst possible time! But anyway, I hope you enjoyed this issue, and don't forget to write that feedback! See ya next time!