Hello! And welcome to this month's edition of the Entertainment Section. I am your new writer, SKmarioman, and if you have any suggestions that you want me to write about, please PM me on the forums.

This month, I'm going to talk about the Mario parody by Yoshi 1-Up at Newgrounds, SMB: Game Over!

The title is not to be confused by another live-action Mario parody called Mario: Game Over which can be found on YouTube. On Newgrounds, SMB: Game Over is rated E, meaning that it is suitable for everyone.

The story of SMB: Game Over starts off in a land similar to World 1 of the Super Mario All-Stars remake of Super Mario Bros.. Mario is happily walking along when he spots a ? Block and hits it. Mario is surprised to see some sort of green thing come out of it. But when he hits it again it turns out it's just Luigi. The two brothers are staring at each other when ... huh? Where did Luigi go? And why is this Lakitu right in my face? Mario is wondering what just happened when a 1-up Mushroom bops him in the head. Mario looks up to see Luigi running off in the distance, only to be defeated by one of Lakitu's Spinies.

Mario starts the level over when Luigi falls from the sky somehow and destroys the ground, making Mario fall to the sea. Mario is swimming around trying to find a way out when a Blooper starts following him, which Mario doesn't seem to notice. When he finally finds a Pipe to get out, he sees some sort of cloud underwater wink at him. Mario doesn't care and walks on, but when the Blooper sees the cloud, it gets scared and swims away. 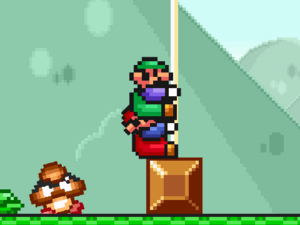 Meanwhile Luigi is about to finish the level when he starts fooling around with a Warp Pipe. Bad move. Mario pulls him in and beats him up until he's knocked out. Mario jumps onto the flagpole, but the flag doesn't go down. Mario looks up when Luigi lides down and puts his bottom in his face. Luigi! Mario instantly punches him and Luigi goes flying to the top of the flagpole. Mario finishes the level and the fireworks go off, one of which hits Luigi and makes him fall into the Warp Pipe that leads to the next level.

The next scene is the shortest one of all of them. Luigi goes into the underground and spots a banana by a Warp Pipe. He concentrates on it when it suddenly turns into a spring. Confused, Luigi jumps onto the spring and goes into another pipe into a Bonus Zone. He notices that a picture of him making the V-sign is in the background. "Just what I needed!".

Almost immediately Mario went into the same level Luigi just did. Mario is taking a look around when he suddenly hits an invisible block. The coin that came out somehow hit another invisible block that contained a vine.

Struggling to reach the vine, Mario picks up a banana (which almost instantly turned into a spring) and used it to jump up to the vine. But, the spring wouldn't spring (hey, are springs even suppoesed to do that?). Two Koopa Troopas saw that Mario needed help, so one of them took off their shell (after walking off sceen because Beach Koopas aren't in SMB1, isn't it obvious?) and tossed it into the spring, making it activate. (at last!) But then it turns out the vine didn't even sprout high enough. Then the vine shot up into the sky. "Mamma MiYAAAHHH!"

Soon enough Mario was in Coin Heaven, but, well obvoiusly since the vine was absolutely plummeting into the sky, Mario went flying to who-knows-where.

When Mario landed, he was on the winking cloud that he had seen when he was in the underwater. Scared, he jumped off that cloud and onto the Coin Heaven cloud to go through coin heaven.

Well, I think we'd like to call it just 'Heaven' because there were certainly no coins.

A while later Mario saw the Bros. V-sign image that's in every bonus zone. But... why was Luigi on it? Mario was so digusted that he didn't even realise that he just fell to the ground. He also didn't realise that the winking cloud had just come to do something to that Luigi sign, but, well, don't ask me what happend, I don't know.

The next scene was my favourite one. SLAM! Okay, so Mario fell into the ground when he heard Luigi again. "Yay! Bravo Luigi!" "Huh?" "Wah!" Heh heh, Mario is so sneaky like that, he somehow ended up in Luigi's face in pretty much a second.

Luigi had saved Princess Peach (still in the cage Bowser had put her in) in just that time Mario had been in Coin Heaven. I guess Luigi is sneaky like that too. Well, the Princess sort of had her own ideas too (I think). She pretty much knocked the door of the cage down, squashing Luigi.

Trivia: reference to Super Mario Bros.. Mario is too small for Peach without a Mushroom, so he runs off and gets himself a Super Mushroom. Should have thought about that earlier, shouldn't he.

Leaving Luigi behind, Mario and the Princess run off to her castle. Bowser then comes out of nowhere and kidnaps Luigi! :O

Bowser locks Luigi in the cage and sets of for Bowser's Castle. But he somehow walks into a gap in the bridge, where that winking cloud is there again! :O :O

The cloud somehow locks Bowser in the cage with Luigi, and just when things couldn't possibly get worse, they get worse. Three MORE clouds come to join in with the fun, leaving Bowser and Luigi out of luck for sure.

Mario and Peach are back at the castle, and the Princess gives Mario a kiss and goes inside. Mario stays outside for some reason, and it starts raining. I don't really get this next part, but for some reason Mario just runs into a Warp Pipe, and those all-too familiar words appear on the screen.

Or at least it was for Bowser and Luigi. Heh Heh.

So as for my recommendation, check out SMB: Game Over. It's bound to have you laughing for hours!

That's all for this month. Stay tuned for next month's edition of the Entertainment Section!