Hello, everyone, and welcome to the Holiday Issue of Upcoming Games!! I was actually supposed to write it for the November Issue according to my bi-monthly schedule, but I decided to postpone the section to December due to time constraints. However, my schedule won't be disrupted by that change: I will still write Upcoming Games in January, and the cycle will resume from there.

Anyway, I think I've held you long enough, so why don't we take a look at the actual news? I myself believe that to be a terrific idea.

And so we get to the actual news. Nintendo held not one, but two Nintendo Direct conferences since the last issue of UG, one on October 1st, and the other on November 13th. As usual, Satoru Iwata, President of Nintendo, walked viewers through the new Wii U and Nintendo 3DS releases for the 2013 Holiday Season and 2014. 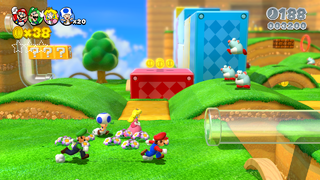 Believe it or not, Brazil got this game before Europe.

The first game to appear in the October 1st Nintendo Direct broadcast was Super Mario 3D World, for the Wii U. After a brief gameplay trailer was shown, Mr. Iwata talked a bit about the game's main new features, such as the multiplayer support and the 3D levels. Super Mario 3D World was released in Japan on November 21st; in North America on November 22nd; in Brazil (yes, I've just mentioned Brazil while talking about a game's release) on November 26th; in Europe on November 29th; and in Australia on November 30th.

The next and last Mario game covered in the first Nintendo Direct was Mario & Sonic at the Sochi 2014 Olympic Winter Games, also for the Wii U. Gameplay footage was shown alongside the new online features, such as the ability to compete with players from around the globe in certain real-life winter sports and Dream Events. Additionally, players are able to earn points for their home nation by challenging other players from around the world. Mario & Sonic at the Sochi 2014 Olympic Games was released in Europe on November 8th; in Australia on November 9th; in North America on November 15th; and in Japan on December 5th.

As far as Mario games go, the second Nintendo Direct video began with additional information on the Download Play features in Mario Party: Island Tour, for the Nintendo 3DS. As announced by Bill Trinen, from the Nintendo of America Treehouse, up to four people are able to compete in the seven new game boards with a single game card. Additional gameplay footage was shown, alongside a new mode called Bowser's Tower, where players must clear a series of minigames in order to advance from the current floor to the next one. Mario Party: Island Tour was released in North America on November 22nd, but it still hasn't hit shelves in the other major regions: European gamers will be able to get the game starting on January 17th, 2014, while players from Australia will have to wait an additional day, as MP: IT will be released there on January 18th.

Super Mario 3D World was also featured in this Nintendo Direct broadcast, as Nintendo of America COO Reggie Fils-Aime showed players a few secrets from the game, which include unlockable levels and game modes, aside from other features.