Hello, and welcome to the Fake News! I've been really busy this month too (starting school again @_@), but I'll hopefully be more prepared next month.

Unfortunately, Alexneushoorn (talk) has been fired from his Police Blotter position, but, still, we wish him luck in the future.

Our Section of the Month winner for August was Yoshi876 (talk) and the Obituaries section, with 31 votes! Conglaturations! Pyro (talk)'s Travel Guide came a close-ish second with 23 votes.

That'll all from me this month, but I'll hopefully be able to be more active in October, so look forward/away from that! Bye!

Earlier this month I got a message from Bowser to come up and help him beat the Mario Bros., and of course I'd accept this because I hate Mario & Luigi. However, after hearing this castle was new and flying (because that's the most original thing King Bowser ever did), I decided I'd go up and inspect it for Travel Guide. I learned its name was Neo Bowser Castle, and it was purple, and I was expecting to see Waluigi up there.

I soon learned two things: that this castle was wished upon by this dumb thing named Antasma and that this castle has way too many traps for me to handle. Well, actually, this castle wasn't creative with its traps. The usual stuff...spikes, lava, fire. You should know how to avoid these by now, but I was moving with a huge wireless Xbox controller, so I constantly hit these.

I questioned the fact that there were no real puzzles in the castle, just a bunch of shiny lines everywhere and blocked doors. Thanks to Corporal Paraplonk's Neo Tourist Service I just flew over all of these traps and got to the good stuff.

There are lodges and shops exclusively for the Koopa Troop, because we want more backtracking for the Bros.! The shop, Grumbell's Great Goodies, included star-shaped candies that weren't as delicious as they seemed. It did sell some really nice clothes that knocked me out randomly, so I just sold them. They were very comfortable, though. 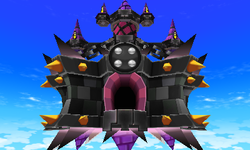 The inn was Shy Guy's Resting Stop, and when I slept...nothing happened. Apparently when I sleep there a dream is supposed to appear above my head, but none of that happened. They, however, never gave me a refund but instead gave me this ball I could throw at people. It didn't help with anything.

The castle was very big though, as it spanned four floors and I almost always got myself lost in it. During this ordeal, I accumulated an excess of items that I plan to throw at the Mario Bros. when they're not looking. This is seriously the most cunning plan I've ever come up with.

There's also a cute Chain Carousel that I'm never telling you where it is, as it spouts money at you and you could actually be Mario reading this. Even if I'm just an intern here, I don't want to get fired. I can't live off hurting myself and yelling at games, so the next best thing is to work for Bowser.

Overall, Neo Bowser Castle is a very nice place to visit that people won't actually be able to get to because of this weird barrier thing.

Still taking requests for where I should go next! PM me on the Super Mario Boards to tell me where I go next! I'll go anywhere that isn't Grape Gardens from Kirby's Adventure. 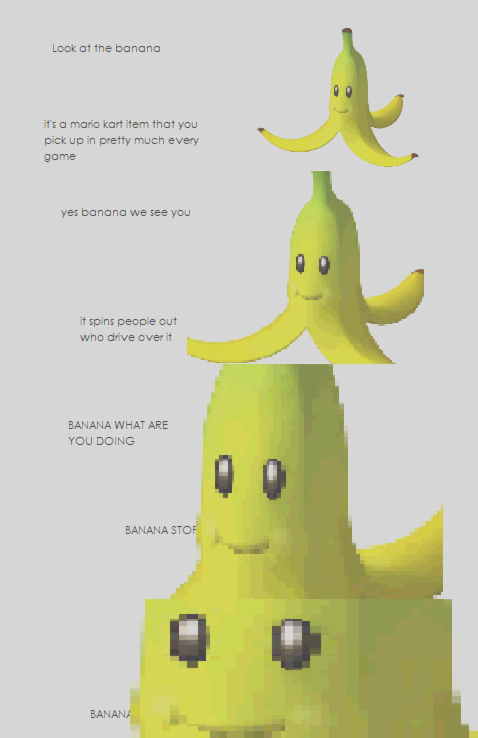 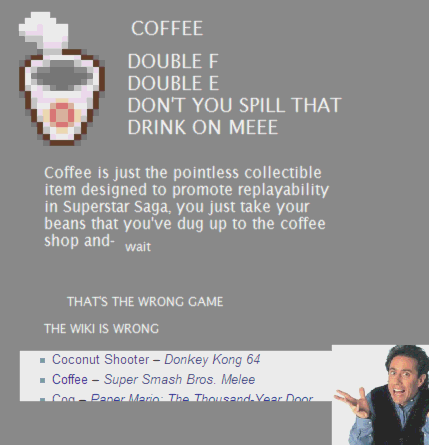 Kylie Koopa, she’s got your number, but it sadly seems she didn’t have the number of the police as she was murdered a few days ago. 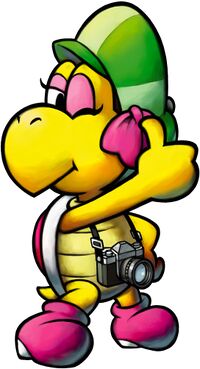 Kylie was found at her home 2 days ago dead, the police were alerted to her death by the Koopa Kronicle who said she hadn’t turned up to work for a few days, although the fact that she had stopped working for them a few years ago begs the question why they had only just realized. The Chief Editor of the Koopa Kronicle had this to say “She was good at reporting, however, when she wrote the amount of slang she used made her sections unreadable,” and this is why her Shroom application was rejected it seemed many concurred with the editor as letters were frequently sent in complaining about it. After working for the Koopa Kronicle, Kylie set up her own business on Pi'illo Island as a tourist guide writer, however, due to her use continuous use of slang and lack of organization (she left the photo she took all around the island), her business was largely a failure and many people used the already existing tour guides.

As a worker Kylie was useless, but as a person it appears that Kylie was well respected. Her former friend, Mario, had this to say “Mamma mia! It is a great shame that she has died, she was an extremely pleasant person.” We tried asking Mario to put a joke in there, but out he declined. We also interviewed one of her enemies Petey Piranha who had this to say “GWARGH! HURGLE BURGLE PLBBBT! HARG! KURBLARGLE HARGLE PLLLBBTTT!” this is surprisingly easier to understand then anything Kylie has ever written.

In the aftermath of Kylie’s untimely death newspapers and other forms of literature are now a lot easier to understand, due to the fact that her slang is now gone from them. It also has a surprising effect on the environment, as deforestation will now no longer be as bad as Kylie will not be there to destroy the trees for photos she just randomly leaves everywhere.

Paper Yoshi got no questions in the past month. Be sure to help the Fake News team by sending a PM with your questions!