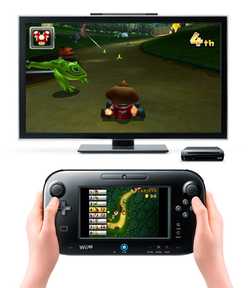 A clear idea of how we'll play the next Mario Kart for the Wii U console. Yeah, the image is edited and the shots are from Mario Kart 7. I'm sure that the future game will look even better than this picture.

Hello, Mario Karters, and welcome to The 'Shroom's Mario Kart: Wheel Tips Corner. Twelve months have passed and finally the last tip of the year is here! Oh, wait, sorry... This time there won't be any tip. Today, I want to make something special for the Holidays, inspired by the wishlists that children write to Santa Claus. This article will be a list of wishes for the upcoming... Mario Kart for the Wii U. Alright, I know that it's too early to start thinking about another Mario Kart game, but like many professional game developers, thinking of ideas for the next game is a process that starts instantly after having made the last one. Additionally, as the Wii U has just been released, it's becoming a trend see many reviews, comparisons, and speculations about the projects that are in the works for the new console. So why shouldn't I try to do this?

As we know, the Wii U offers some new features to make a fascinating Mario Kart game for the console. The most remarkable characteristic is the GamePad controller that can serve as almost anything. However, there are some applications and functions inside the console itself that can make a future Mario Kart game an unique experience, aside from the idea of a controller with a screen. This is a list of possibilities that we can see (maybe someday) in a future Mario Kart game:

Now you can play many games away of your TV with this wonder. The Wii U GamePad will be good also to play races in first-person views, as it is in the 3DS.

Cross-play would be a great implementation for a game like the Mario Kart for Wii U.

Personally I'd like to see this game in HD.

And that's all, Shy Guys! Hope you have enjoyed this last issue of Mario Kart: Wheel Tips Corner for the year. Prepare to see nice games next year for the Wii U and that upcoming Mario Kart game we hope hear some news about next year. This is Coincollector and the members of The 'Shroom wishing you a happy Holidays and a happy New Year!