The Hint Block with a face is native to the Yoshi series. Anyone who has ever played a Yoshi game will never forget them. They are jovial white blocks with faces that continued the spirit of the faceless message blocks of Super Mario World. They appear in Yoshi's Island, Yoshi's Story, and Yoshi's Island DS. Only in Yoshi's Story do their mouths ceaselessly move. They have a cameo in the original Super Smash Bros., appearing in the Yoshi's Island stage. Sadly, future games in the series failed to give them recognition in the form of Trophies or Stickers.

None, other than the uncanny ability to lend a hand to good ol' Yoshi. They have the power to magically float unsuspended in the air, but that is certainly not an uncommon ability for animate blocks in Mario's world, let alone animate ones such as the Hint Blocks.

They are very knowledgeable and informed of Yoshi's surroundings. "RUN AWAY!!! HURRY!!!” may be one of their most famous quotes, warning Yoshi of Tap-Tap the Golden. They can also tend to be poetic. Let us take Pak E. Derm's Hint Block for example: "Pak E. Derm will not let you by, unless you give something special a try." Of course, as you know, the Hint Block was cueing Yoshi to perform a Ground Pound to knock Pak E. off his feet. Nintendo has not seemed to have forgotten Pak E. over the years, featuring him in the Smash Bros. series in Trophies and Stickers. 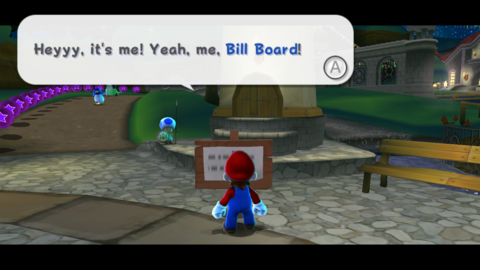 The Bill Board signpost first came into being in Super Mario 64, but it was not until Super Mario Galaxy that Miyamoto breathed new life into them and gave them personality and become sentient. Though they do not have a mouth, they can speak. But since they were not sentient in Mario 64, it is unknown who wrote the message on them. One noteworthy non-sentient sign in Mario 64 said: "It Is Decreed That One Shall Pound The Pillars."

Well, they are signposts who can speak (at least since Galaxy). They also give Mario useful advice/tips. What wondrous things one will see in the Marioverse so oft taken for granted such as these.

Starting with Galaxy, the signposts develop personality. There are four kinds, all with real first names that rhyme with "Bill" including Bill (which is incidentally itself a real nickname for "William"). You have the verbose Gil Board, who refers to himself as "The famous Gil Board". There's also regular Bill Board, who notably shows Mario how to roll on top of the Star Ball. Phil Board teaches Mario how to move in a bubble, and Jill Board, the only female (???) signpost, who informs Mario how to control Boo Mario.

Hands down (even though he doesn't have any) Hint Block. He is unique, he is funny, he is unforgettable, poetic, charming, and he has a face.