Character Artwork of the Month (Rise Up Above It) 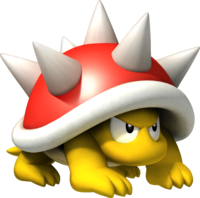 This month's character is a fairly well-known enemy and Koopa subspecies, the common-or-garden Spiny! Now, while you may loathe them with a passion for mainly being thrown at Mario's face just as you get him to jump over a long bottomless pit, you can't deny that they are rather cute. Especially the paper ones. And it's not exactly their fault that cloud-driving lunatics have a penchant for plucking the poor little critters off of terra firma to use as throwing ammo. Who wouldn't find it hilarious to toss around some very spiky creatures around from the vantage point of high up in the clouds? Just me? Oh. 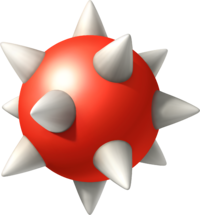 Won't you think of their own feelings about being spiky volleyballs???

Also, I think that it's a pretty cool moment when you're playing Super Mario Bros. 3 and you meet your first Lakitu, who promptly bombards you with Spiny Eggs, and see the eggs uncurl and start shuffling along so you're like "OH MY POOCHY THEY MOVE!!!!"(...wait, if you're only playing SMB3 for the first time and haven't played other Mario platformers, how could you possibly know of Poochy yet???? o_0). Thanks for reading! Next Month - #210 Ancient Minister 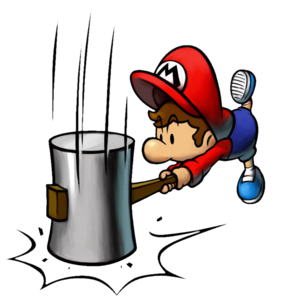 The image you see here is one of the most iconic pictures of Baby Mario, a scene of him using his Hammer from Mario & Luigi: Partners in Time. Hammers were one of the primary methods of attacking in the game.

The Super Mario 64 Slide Theme is easily the most recognizable slide-related video game song in the entire world... period. The theme was just not used for the secret slide, but also the penguin races on an icy/snowy slide.

The song became reused in Super Mario Galaxy 2 in the Tall Trunk Galaxy. The song perfectly lent itself to this even more awesome slide challenge.

Let us not forget the beetle races in Donkey Kong 64. These slide challenges were far more difficult than any challenge taking place on a slide in any Mario adventure. They are considered some of the hardest Golden Bananas to collect in the entire game with it's hundreds of bananas. Some people think the beetle race with Tiny in Angry Aztec is more difficult, and other's think Lanky's race with the beetle in the Crystal Caves is harder. Without all things considered, it should be noted that unlike Tiny, Lanky can outrun the beetle in the race's final stretch.

FunkyK38's Sprite of the Month

Sprite of the Month: For the month of May, I have this sprite for you: Pokey from Mario and Luigi: Partners in Time

! The flowers are growing right now, and unfortunately, so is this one. Don't run into it while driving a MarioKart. Trust me on that one if you don't know already. 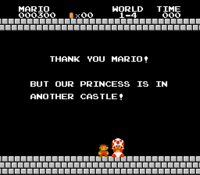 Here we have one of the greatest scenes in video game history. Mario dodged a countless number of Koopas and Goombas, hopped over numerous pits, and conquered a whole castle to find out... he went to the wrong castle. That's why I just had to choose this for this month's Screenshot of the Month.

I don't have much else to say about this picture besides that, but it's such a classic that I couldn't resist. Oh well. I hope you enjoyed this month's screenshot. Hopefully I'll be around next month to display a new image!