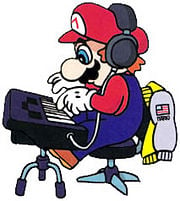 Welcome back to the 'Shroom's one and only Music & Artwork sub-section! I hope you enjoy this month's sections!

I am currently accepting pictures for the Music & Art's Sketch of the Month. If you have any drawings related to Mario that you think should appear here, send them to me and they'll appear on the next issue of the 'Shroom! 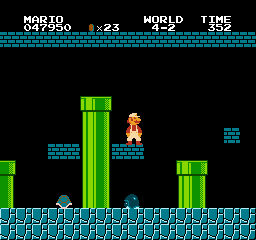 Hey everyone, and welcome back to another fun and exciting issue of the 'Shroom's very own, Screenshot of the Month! The image I chose for this month is much more basic than the last one, but it's still a great picture. It's a neat screenshot from Super Mario Bros., one of the most popular, well-known, and best-selling games of all time. The game is such a classic that it was chosen to be one of the 3DS Ambassador games, which is why I chose a screenshot from it this month!

To be more specific about the image itself, this is a neat-looking, high-quality picture from level 4 - 2 of one of Mario's earliest adventures. The player's score is displayed at the top left-hand corner of the screen under Mario's name. Next to that, there is the number of coins the player has collected, what level they are on, and how much time is left to complete the level. As you can see, the picture takes place in an underground level, where Mario is standing on some brick blocks next to a pipe. A few more of these blocks and pipes are also around him. The small enemy you can see on the ground near our hero is a Buzzy Beetle, who can cause quite a lot of harm. What a classic!

That's all for this month! Come back again to see next month's Screenshot of the Month!

Hi again, MarioWiki, and welcome to September's Soundtrack of the Month! This month, I chose a song from Super Smash Bros. Brawl. The soundtrack name is "Luigi Circuit" and is a remix of one of Mario Kart 64's themes. I hope you like it.

This month's Sprite of the Month I think you all may agree with me on:

It's a Sad Raven from Super Princess Peach. Like the raven, I am equally sad that I have to go back to school instead of doing things like playing Mario and Pokemon in my spare time, which I seem to have NONE of.

Sorry, everyone, but I didn't get any artwork this month. However, if you have any drawings related to Mario that you think should appear here, send them to me (with a description on them, if you want) and I'll put them in the next issue of the 'Shroom! 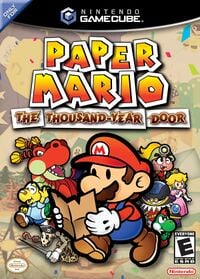 "Paper Mario: The Thousand-Year Door": considered one of the the best games of both the Paper Mario series as well as out of all Mario RPG games. At first glance, you probably see just Mario, Peach, Yoshi Kid, Koops, Goombella, Sir Grodus, Hooktail, and Cortez - along with the title and the labels. Well, take a closer look now.

Behind the characters, there is the map of the entire region that Mario explores in the game. If you look carefully, notice how Glitz Pit and X-Naut Fortress are clearly seen, with Creepy Steeple, Keelhaul Key, and The Great Tree partly seen. In the game, you don't unlock those as soon as you get the map, but throughout the game. Basically, this is spoilers for the game before you even play it!

Now, you can see the confetti falling down across the box-art. Strange? Well, based on the fact that it is Paper Mario, I would guess that it would be there to both celebrate the game as well as a reference to the game dealing with a lot of paper properties and appearances. Now, I may be wrong, but this entire thing is opinions, right?

Well, other than that, there really isn't much to see. It is a well-put together box-art to say the least, as well as much spoilers without be known to the players until they play the game. That is perhaps one of the most clever ways to have spoilers without knowing it until later. Anyways, Baby Mario Bloops now signing off, and see you all next month!!!!

This picture shows the Cheep-Cheep Blimp, a vehicle found in Paper Mario: The Thousand-Year Door, which happens to be my favorite game of all-time. The blimp transports Mario between Rogueport, the main hub of the game, and Glitzville, a floating city in which Chapter 3 takes place. In Glitzville, Mario must become a professional fighter and ascend to the top rank in the Glitz Pit, a championship fighting ring. After completing Chapter 3, Mario can still use the blimp to access Glitzville to continue fighting in the Glitz Pit or to complete side quests.