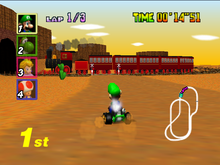 Respect the train signals when approaching the track. 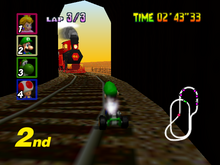 Taking this route was not very intelligent...

The train as it appears in Mario Kart 7. I guess that everybody knows the number on the front, so I won't tell ya.

Hi everybody! Welcome to Mario Kart: Wheel Tips Corner. To celebrate this special issue dedicated to the Nintendo 64 and its history of memorable and acclaimed games, and as a means to make up for my absence in the past issue, today I'll talk about two tracks. These tracks come from Mario Kart 64 and are Kalimari Desert and Toad's Turnpike. Let's begin.

The first one I'll talk about is Kalimari Desert, the last race course of the Mushroom Cup. The track is located in a vast wild west-themed desert, with several cacti scattered about and sandstone cliffs. Additionally, the track surrounds a large cliff which is the home of the most remarkable feature of this track: two trains that constantly travel over a large part of the course. The trains are also a major hazard in this course. If a driver crashes into one, the kart will roll over. In the worst of the cases a train can hit a driver several times and push the kart away from the racetrack, leaving the driver in last place. You need to take care where the racetrack crosses the railroad. Another hazard in the road is the cacti, able to stop the racer that touches them. Fortunately, cacti are away from the road on the rough sand.

The track begins at the right side of the cliff. Go straight to find the first big U bend to the left with the first group of Item Boxes. That bend leads to the left side of the cliff and the first railroad crossing. Always pay attention to the railroad signals in case they announce that the train is approaching. When the train is crossing the road, it's best to decelerate and wait until the train has gone. After that crossing the track continues in a stretch that bends slightly to the right. In that part, you'll find the second set of Item Boxes. Right after said set is found another railroad crossing. The track continues in a large curve that turns to the right. To the left side of it there is a small area of loose ground from which the railroad can be seen. The main road then runs right next to the railroad, but players don't need to worry about being so near to the train, as a pair of fences blocks access to the railroad everywhere except the crossings. You'll go in a straight line to see the last group of item boxes and the railroad's tunnel's entrance, after which there is a slight S turn to the right before the end of the lap.

On a side note, the railroad's layout is a simple oval loop. It is possible to take the railroad route without problems, but the railroad is NOT a shortcut (despite what certain game guides say). If you go this way you'll likely lose time, and a lap completed by travelling through the tunnel won't be counted.

On the other hand, you can take shortcuts in some curves by going over the rough ground. As you know, that type of ground slows your kart down, so it's best to use a Mushroom or a Star when taking these routes. However, when using mushrooms be careful of the cacti that I mentioned before (using stars, these obstacles aren't problem at all). The first and third curves are ideal for this type of shortcut.

As a side note, the train may or not may have cars attached to it in certain modes, possibly to prevent graphical overloading. For example, in Grand Prix mode there are five cars, while in versus there is only the engine.

This track reappears in Mario Kart 7 as the first course of the Leaf Cup. The track has changed in some notable ways since Mario Kart 64. It's slightly shorter in length but having yet the two trains on the railroad tracks (online multiplayer only appears one). The railroad itself still can be accessed, and it's still not recommended. However, unlike in MK64 where you can enter the tunnel, in MK7 entering the tunnel will cause Lakitu to rescue you and put you back on the road. This has the effect of making it less of a setback to take the wrong route than it was in MK64. There are also some new alternate routes that allow racers to avoid having to stop for the train. At the first corner you can follow a slope near the cliff to a blue ramp and glide over the railroad safely. There is also another blue ramp in front of the second crossing, located to the right and separated from the road. You must use Mushrooms or Stars to reach these ramps. In the case of the second ramp, you should also take extra care not to fall, as it is rather narrow and steep. The first and third turns also add wooden ramps for racers to perform tricks. Before the last turn near the line there is another such ramp, and second is off the side of the road. 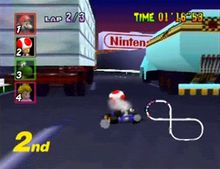 The most difficult part is to drive between two gigantic vehicles. 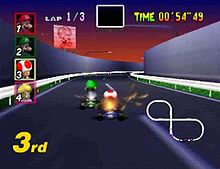 Narrow routes are likely to cause traffic jams. 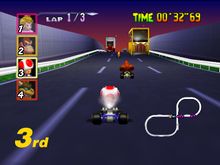 Dare choose this course in EXTRA... you'll learn that you should never go against the flow.

The second track I'll talk about is Toad's Turnpike. This course is the first of the Flower Cup. Despite its name, it isn't a turnpike. It is a long highway with plenty of cars, buses and trucks travelling continuously around in an infinite loop. The track's name comes from the pictures of Toad all over the course. The only hazards on this track are the vehicles that drive on the road. Making contact with one of these vehicles will make the driver's kart blow up into the air. The track has no rough terrain, just a pair of grassy patches on each side of the road protected by guard rails. These make them inaccessible, and thus they cannot be used to evade the traffic and not get hit. Curiously enough, the Item Boxes are not found in the middle of the traffic. Instead, all the sets of Item Boxes are carefully placed to the side of the road (usually the left side). This setup makes it possible to take all the boxes of a set at once and prevent opponents driving behind from getting one.

The race starts in an isolated portion of the track free of traffic. After crossing the line, you'll immediately be on the main road. Straight ahead, you can see the first set of Item Boxes to the left side of the lane. After this set, the track turns to the left. The turn finishes in another straight-away under an overpass. There is a set of item boxes directly before and after crossing under it. This stretch ends in another turn to the left. Turn to the left without stopping and while swerving, you'll notice that the road becomes narrower, making it harder to evade the vehicles that are in front of you. In this curve, you'll find the last group of Item Boxes. The curve ends right before the chequered finish line that completes the lap.

Notably, the difficulty of this track also varies according to racers' engine class. With 50cc, there are few vehicles moving slowly in the same direction as the racers. Using 150cc, vehicles travel faster and more appear. The EXTRA engine class adds another complication, namely that vehicles on the track travel in the opposite direction from the racers. It takes a lot of experience to master this course at this level as a single mistake can cost a lot; being hit by a single vehicle makes you defenceless against another incoming vehicle, especially in the narrower part of the track. As always, if you use a Boo or a Star, you'll be immune to hits from other vehicles and you can run through them safely - but don't rely on this.

Despite its simple layout, Toad's Turnpike has a shortcut. To use it, start from the chequered line and go to the right towards the white guard rail. Jump right before you bump into it. You need to boost your speed with a Mushroom or the powersliding mechanics before jumping or else this method won't work. If you're successful, you'll see that the kart is stuck in the rail or has entered the grassy area. This will cause Lakitu to take you back to the road, but it will drop you below the overpass while you did the shortcut on top of it, allowing you to skip half the course. In some cases it is possible to jump from the overhang and fall right in the middle of the road below without being stuck and so saving even more time.

For Now, Toad's Turnpike hasn't made a reappearance in another Mario Kart game, although it would be good to see "that one level" in the next Mario Kart, don't you think?

And that's all Shy Guys, hope you have enjoyed reading this issue of Mario Kart: Wheel Tips Corner. See you around for the next tip here in The 'Shroom.