The 'Shroom:Issue 64/From the Mushroom Vaults

From The Mushroom Vaults

HI! I'm your marvelous Statistics Manager, Tucayo; and for this issue I'll be writing From The Mushroom Vaults. You probably haven't even heard of this section, so I'll give you all a brief introduction. Once a quintessential section of The 'Shroom, FTMV has been gone for 27 issues. In this section, one of the original sections of The 'Shroom, readers could get tips and cheats on Mario games. But, as Marioguy1 would say, it had faded into obscurity. Until now.


So, to follow this issue's theme, I'll be telling you how to get the 15 Castle's Secret Stars in Super Mario 64. Let’s-a-go!


I assume you already have enough stars to access every part of the castle, but in case you don’t I’ll be listing them from the star you can get first to the last you can get.

If you look closely, you can see Coin #4 in this image. 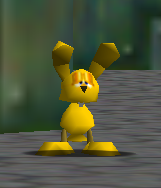 So many clouds, and rainbows, and chances to die.

Break dance Mario to celebrate.
And that’s it! Now you have no excuse not to have the 120 stars. Thanks for reading this guide, and I hope it proved useful. If you liked FTMV, please apply to write it. Enjoy the rest of the issue!
Retrieved from "https://www.mariowiki.com/index.php?title=The_%27Shroom:Issue_64/From_the_Mushroom_Vaults&oldid=2655597"